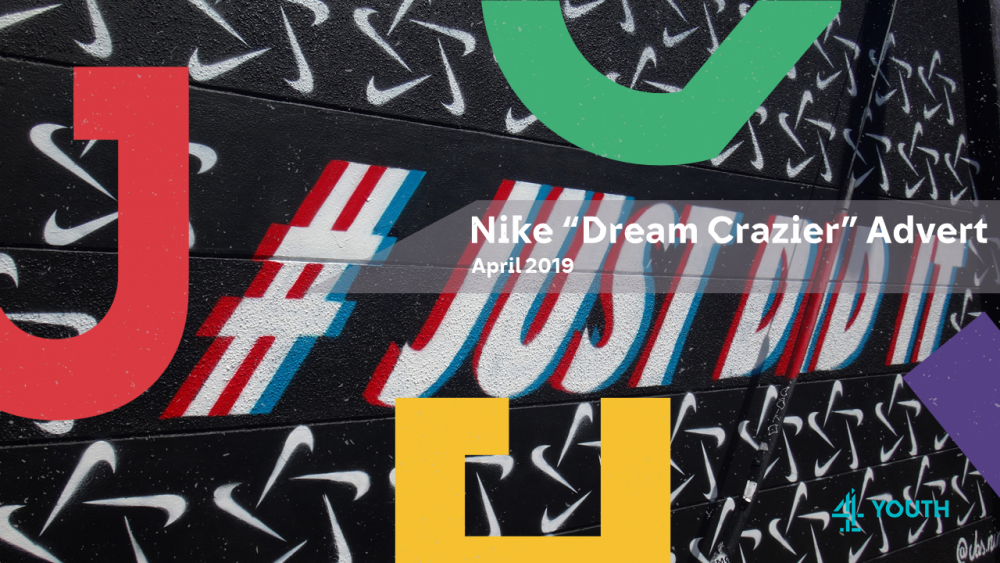 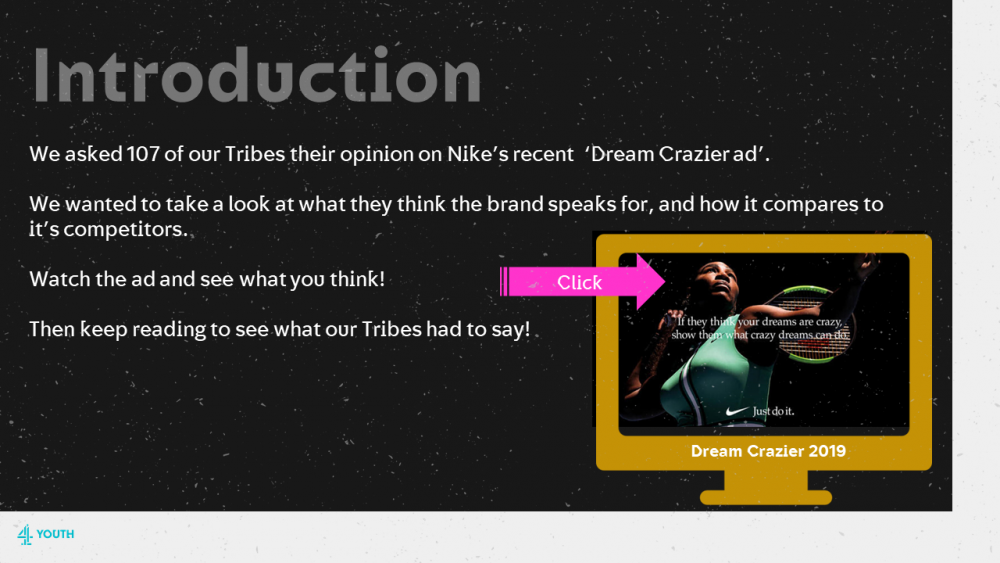 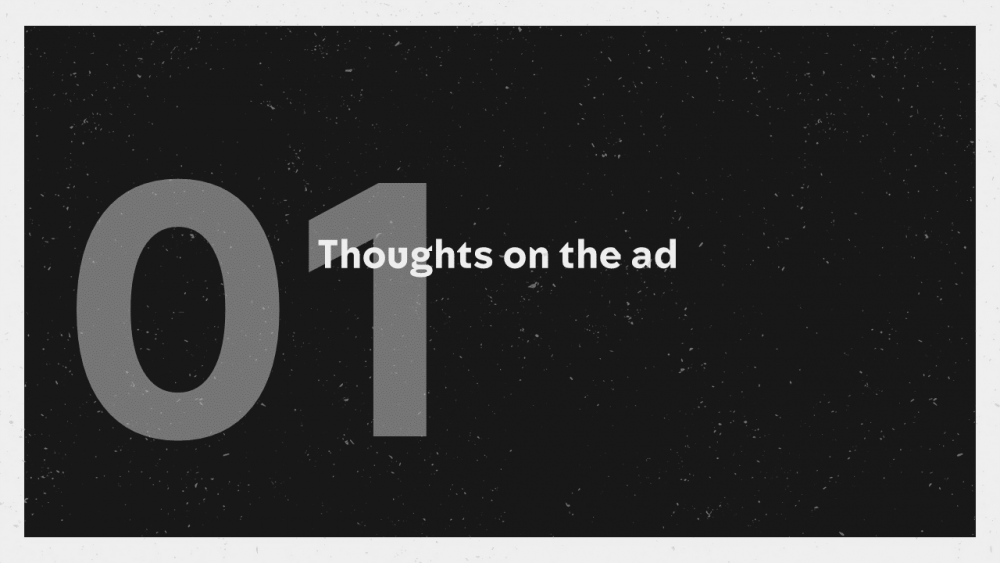 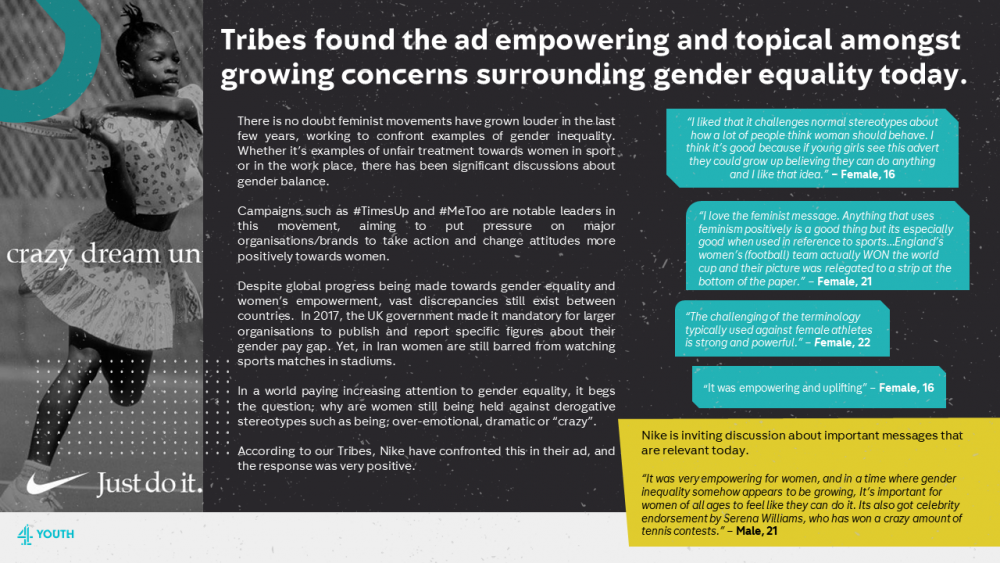 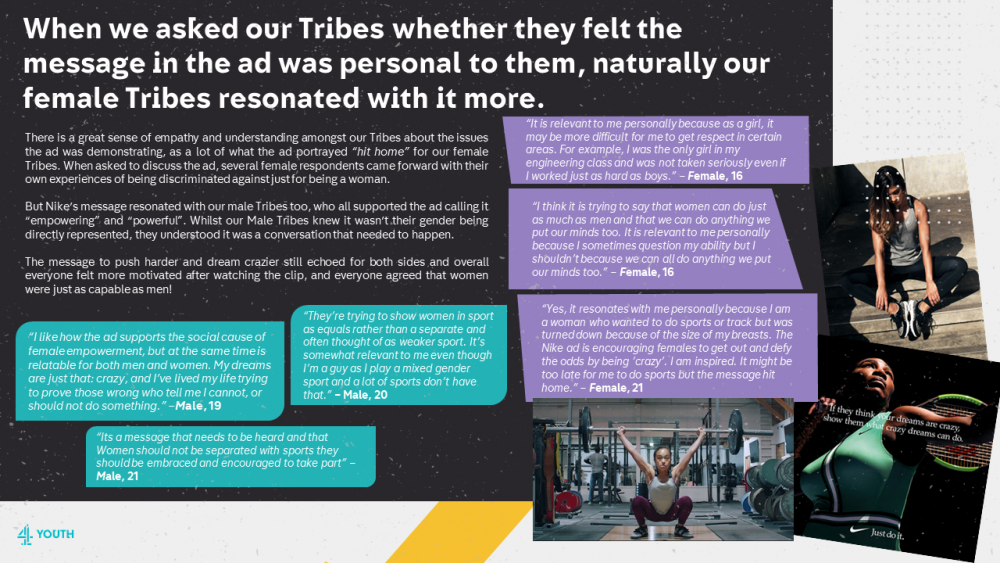 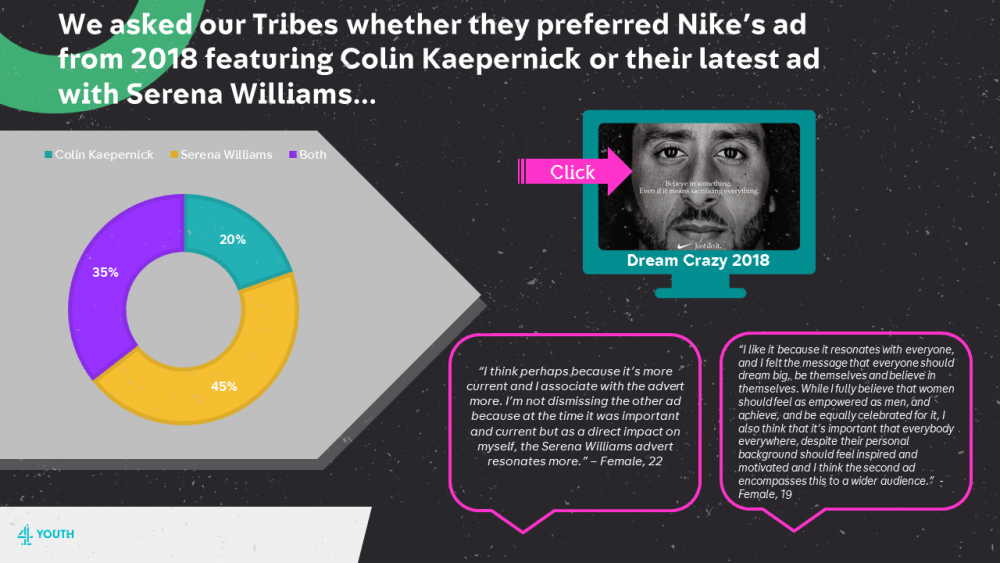 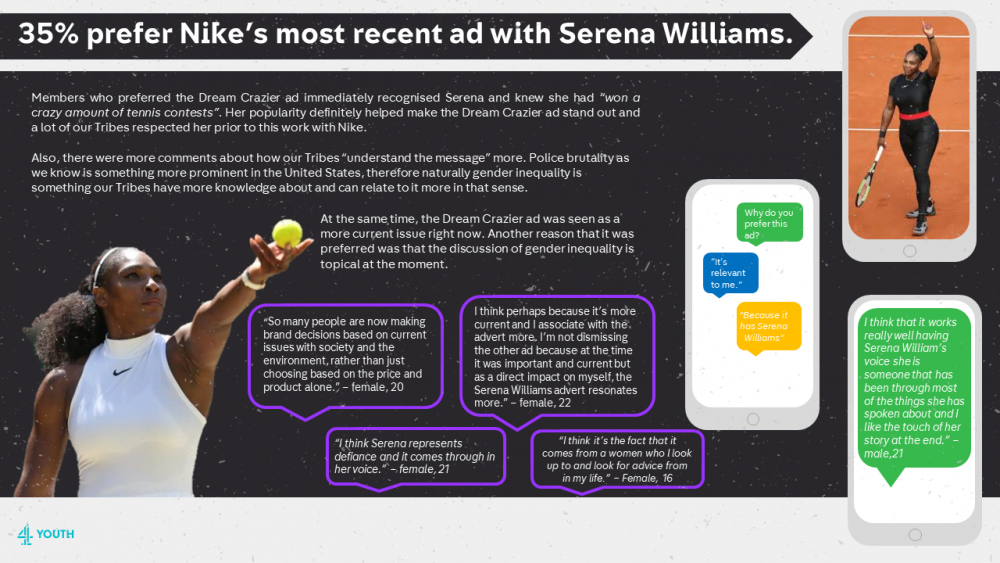 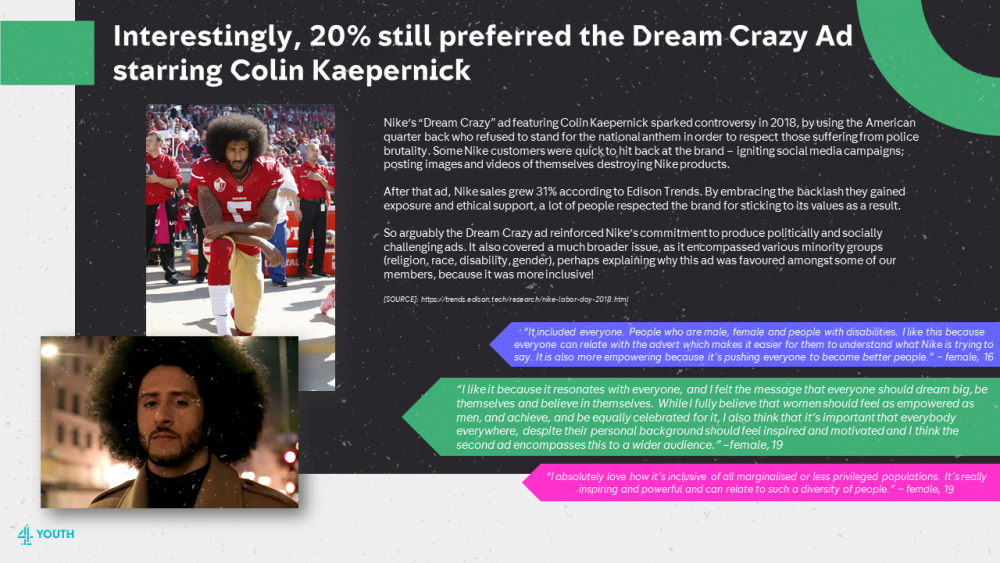 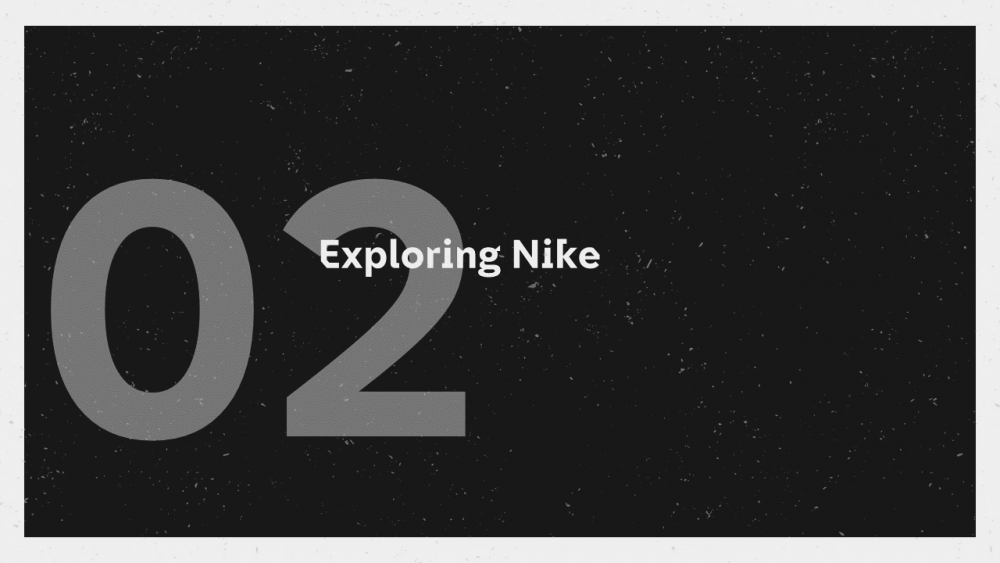 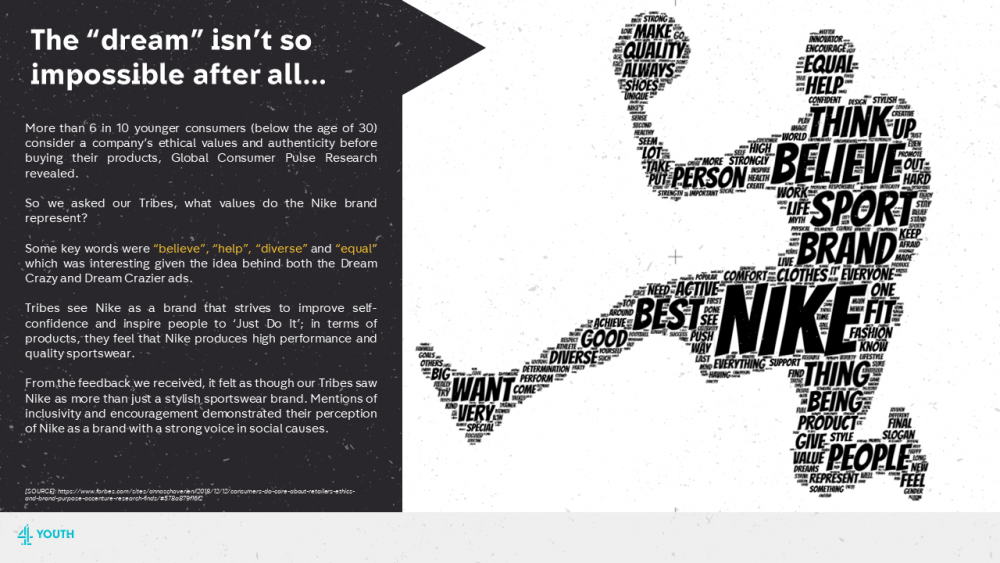 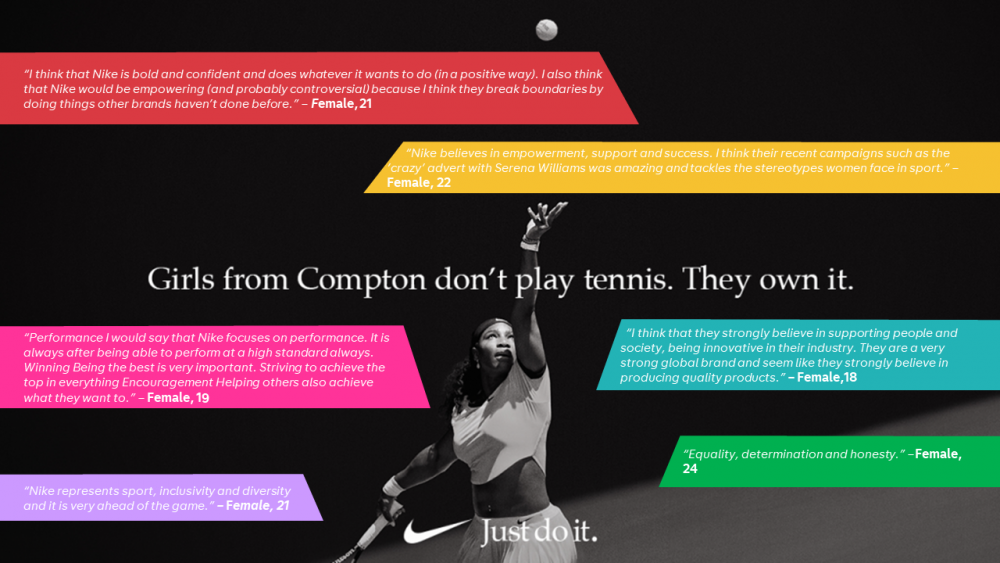 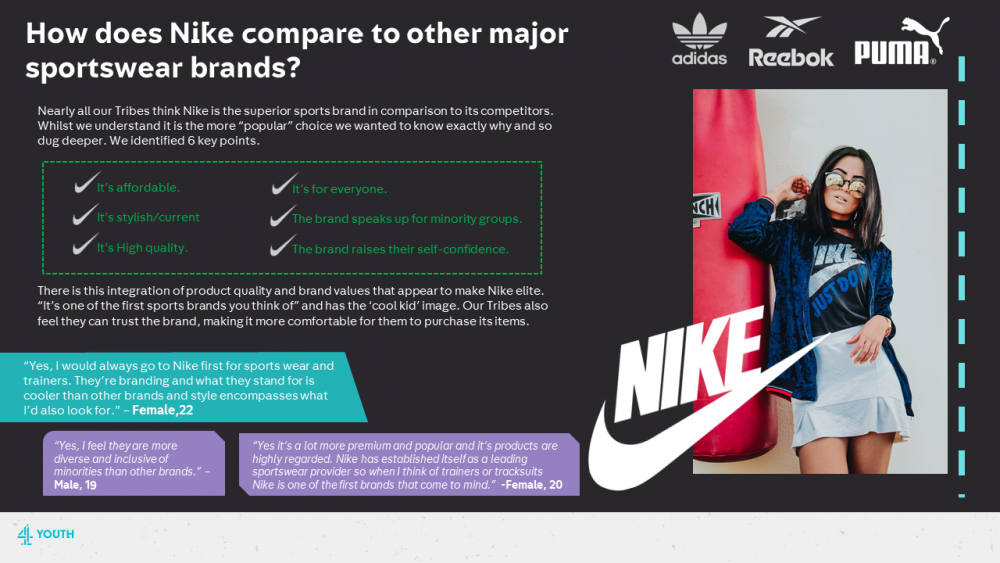 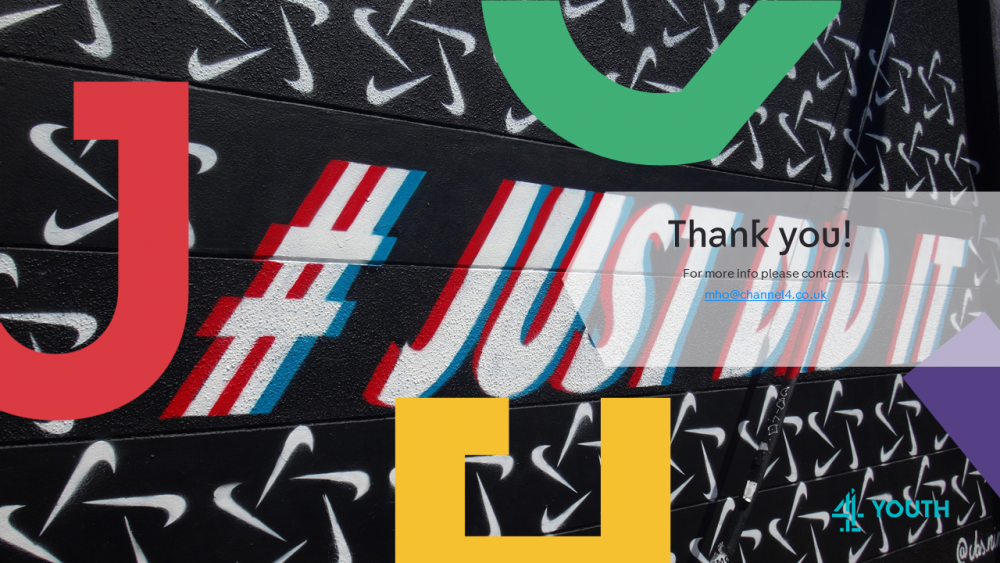 We asked 107 of our Tribes their opinion on Nike’s recent  ‘Dream Crazier ad’. We wanted to take a look at what they think the brand speaks for, and how it compares to it’s competitors.

Watch the ad and see what you think!

Then keep reading to see what our Tribes had to say!

“I love the feminist message. Anything that uses feminism positively is a good thing but its especially good when used in reference to sports…England’s women’s (football) team actually WON the world cup and their picture was relegated to a strip at the bottom of the paper.” – Female, 21

There is no doubt feminist movements have grown louder in the last few years, working to confront examples of gender inequality. Whether it’s examples of unfair treatment towards women in sport or in the work place, there has been significant discussions about gender balance.

Campaigns such as #TimesUp and #MeToo are notable leaders in this movement, aiming to put pressure on major organisations/brands to take action and change attitudes more positively towards women.

Despite global progress being made towards gender equality and women’s empowerment, vast discrepancies still exist between countries.  In 2017, the UK government made it mandatory for larger organisations to publish and report specific figures about their gender pay gap. Yet, in Iran women are still barred from watching sports matches in stadiums.

In a world paying increasing attention to gender equality, it begs the question; why are women still being held against derogative stereotypes such as being; over-emotional, dramatic or “crazy”.

According to our Tribes, Nike have confronted this in their ad, and the response was very positive.

Nike is inviting discussion about important messages that are relevant today.

“It was very empowering for women, and in a time where gender inequality somehow appears to be growing, It’s important for women of all ages to feel like they can do it. Its also got celebrity endorsement by Serena Williams, who has won a crazy amount of tennis contests.” – Male, 21

when we asked our tribes whether they felt the message in the ad was personal to them, naturally our female tribes resonated with it more

There is a great sense of empathy and understanding amongst our Tribes about the issues the ad was demonstrating, as a lot of what the ad portrayed “hit home” for our female Tribes. When asked to discuss the ad, several female respondents came forward with their own experiences of being discriminated against just for being a woman.

But Nike’s message resonated with our male Tribes too, who all supported the ad calling it “empowering” and “powerful”. Whilst our Male Tribes knew it wasn’t their gender being directly represented, they understood it was a conversation that needed to happen.

The message to push harder and dream crazier still echoed for both sides and overall everyone felt more motivated after watching the clip, and everyone agreed that women were just as capable as men!

“I like how the ad supports the social cause of female empowerment, but at the same time is relatable for both men and women. My dreams are just that: crazy, and I’ve lived my life trying to prove those wrong who tell me I cannot, or should not do something.” –Male, 19

“It is relevant to me personally because as a girl, it may be more difficult for me to get respect in certain areas. For example, I was the only girl in my engineering class and was not taken seriously even if I worked just as hard as boys.” – Female, 16

“I think perhaps because it’s more current and I associate with the advert more. I’m not dismissing the other ad because at the time it was important and current but as a direct impact on myself, the Serena Williams advert resonates more.” – Female, 22

“I like it because it resonates with everyone, and I felt the message that everyone should dream big, be themselves and believe in themselves. While I fully believe that women should feel as empowered as men, and achieve, and be equally celebrated for it, I also think that it’s important that everybody everywhere, despite their personal background should feel inspired and motivated and I think the second ad encompasses this to a wider audience.”  – Female, 19

Also, there were more comments about how our Tribes “understand the message” more. Police brutality as we know is something more prominent in the United States, therefore naturally gender inequality is something our Tribes have more knowledge about and can relate to it more in that sense.

At the same time, the Dream Crazier ad was seen as a more current issue right now. Another reason that it was preferred was that the discussion of gender inequality is topical at the moment.

“So many people are now making brand decisions based on current issues with society and the environment, rather than just choosing based on the price and product alone.” – female, 20

“I think Serena represents defiance and it comes through in her voice.” – female, 21

Nike’s “Dream Crazy” ad featuring Colin Kaepernick sparked controversy in 2018, by using the American quarter back who refused to stand for the national anthem in order to respect those suffering from police brutality. Some Nike customers were quick to hit back at the brand – igniting social media campaigns; posting images and videos of themselves destroying Nike products.

After that ad, Nike sales grew 31% according to Edison Trends. By embracing the backlash they gained exposure and ethical support, a lot of people respected the brand for sticking to its values as a result.

So arguably the Dream Crazy ad reinforced Nike’s commitment to produce politically and socially challenging ads. It also covered a much broader issue, as it encompassed various minority groups (religion, race, disability, gender), perhaps explaining why this ad was favoured amongst some of our members, because it was more inclusive!

“It included everyone. People who are male, female and people with disabilities. I like this because everyone can relate with the advert which makes it easier for them to understand what Nike is trying to say. It is also more empowering because it’s pushing everyone to become better people.” – female, 16

“I absolutely love how it’s inclusive of all marginalised or less privileged populations. It’s really inspiring and powerful and can relate to such a diversity of people.” – female, 19″

tHE “DREAM” ISN’T SO IMPOSSIBLE AFTER ALL…

More than 6 in 10 younger consumers (below the age of 30) consider a company’s ethical values and authenticity before buying their products, Global Consumer Pulse Research revealed.

So we asked our Tribes, what values do the Nike brand represent?

Some key words were “believe”, “help”, “diverse” and “equal” which was interesting given the idea behind both the Dream Crazy and Dream Crazier ads.

Tribes see Nike as a brand that strives to improve self-confidence and inspire people to ‘Just Do It’; in terms of products, they feel that Nike produces high performance and quality sportswear.

From the feedback we received, it felt as though our Tribes saw Nike as more than just a stylish sportswear brand. Mentions of inclusivity and encouragement demonstrated their perception of Nike as a brand with a strong voice in social causes.

“I think that Nike is bold and confident and does whatever it wants to do (in a positive way). I also think that Nike would be empowering (and probably controversial) because I think they break boundaries by doing things other brands haven’t done before.” – Female, 21

“Performance I would say that Nike focuses on performance. It is always after being able to perform at a high standard always. Winning Being the best is very important. Striving to achieve the top in everything Encouragement Helping others also achieve what they want to.” – Female, 19

hOW DOES nIKE COMPARE TO OTHER MAJOR SPORTSWEAR BRANDS?

Nearly all our Tribes think Nike is the superior sports brand in comparison to its competitors. Whilst we understand it is the more “popular” choice we wanted to know exactly why and so dug deeper. We identified 6 key points.

There is this integration of product quality and brand values that appear to make Nike elite. “It’s one of the first sports brands you think of” and has the ‘cool kid’ image. Our Tribes also feel they can trust the brand, making it more comfortable for them to purchase its items.

“Yes, I would always go to Nike first for sports wear and trainers. They’re branding and what they stand for is cooler than other brands and style encompasses what I’d also look for.” – Female,22

“Yes, I feel they are more diverse and inclusive of minorities than other brands.” –Male, 19

“Yes it’s a lot more premium and popular and it’s products are highly regarded. Nike has established itself as a leading sportswear provider so when I think of trainers or tracksuits Nike is one of the first brands that come to mind.”  -Female, 20

98% of Tribes shop from fast fashion brands, but only half are aware the brands they purchase from are considered fast f... Read more about Tribes and Fast Fashion

Young people are most worried about climate change and pollution, the effects of which they fear will ultimately lead to... Read more about Young People and The Environment
Your Browser is Outdated!
To experience this and other websites the way they're meant to be experienced, we recommend you update your browser.
Learn More and Update Your Browser