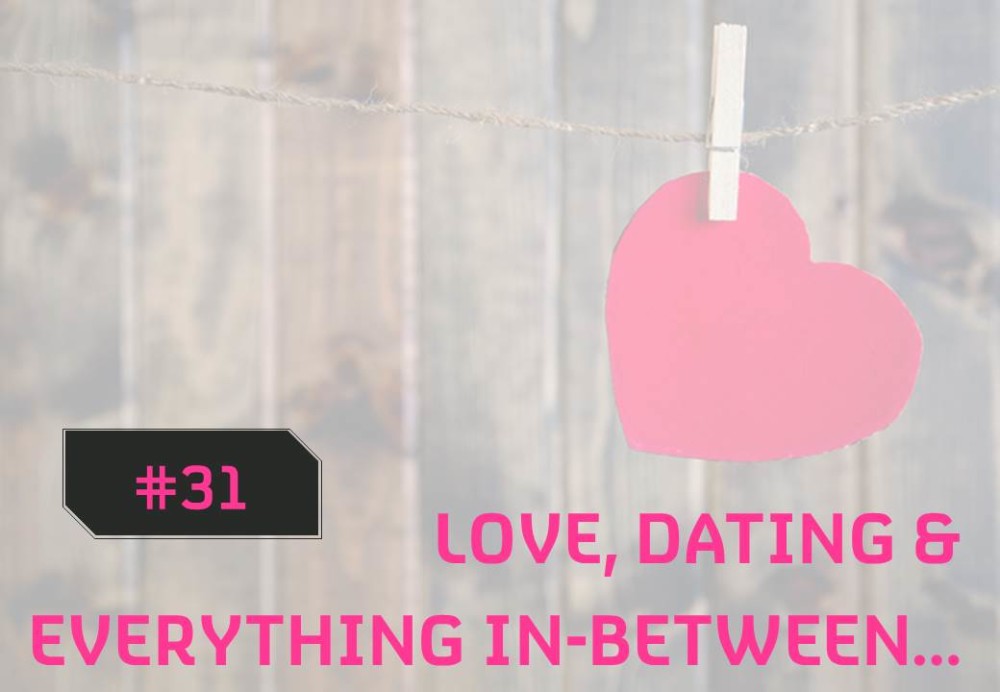 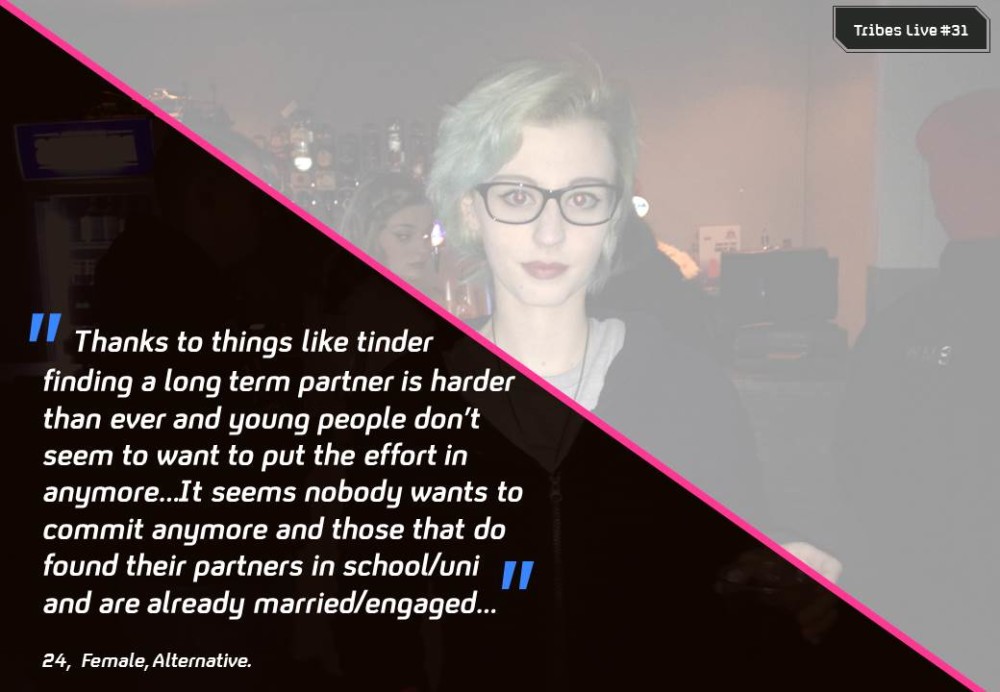 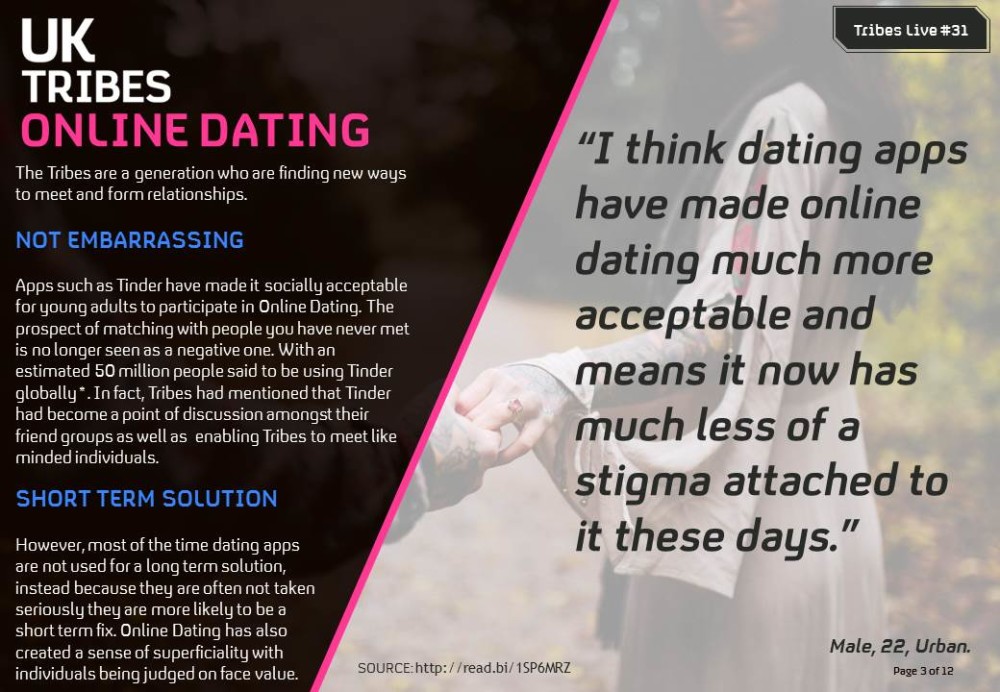 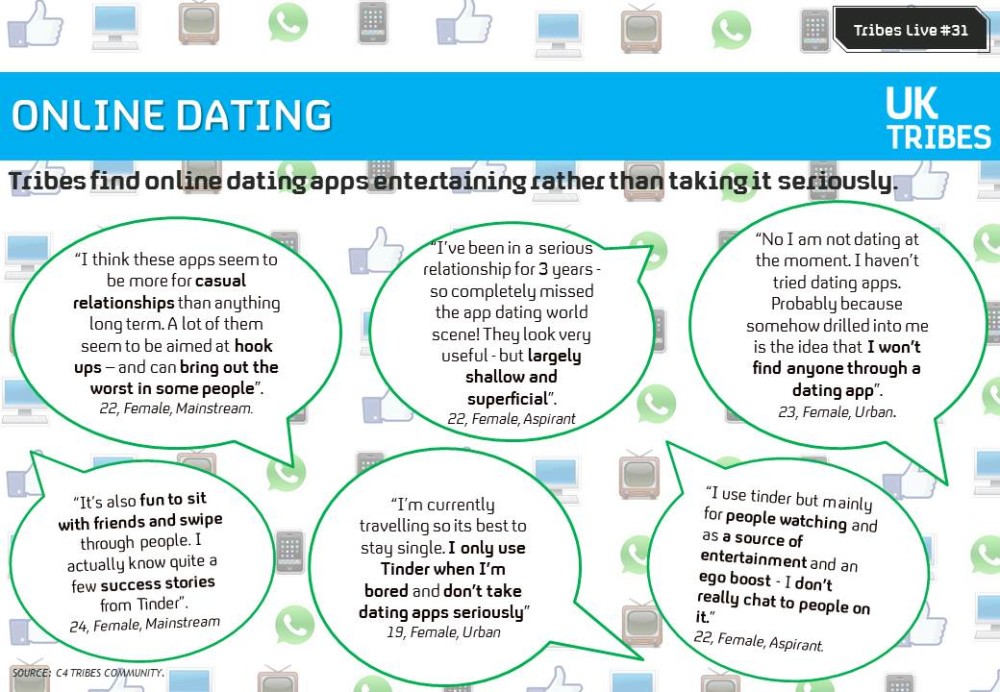 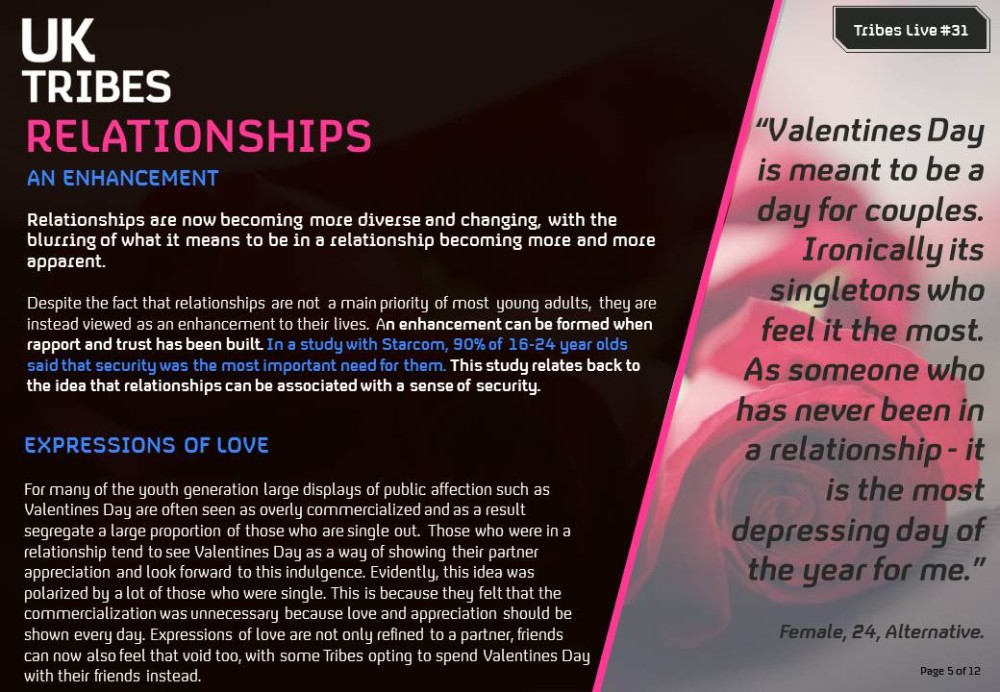 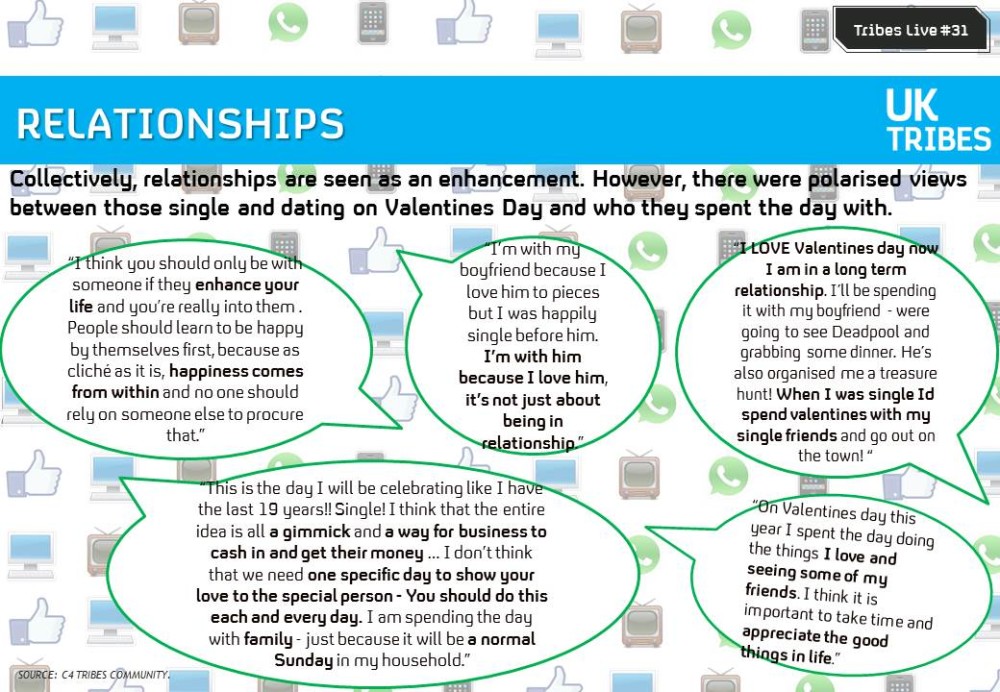 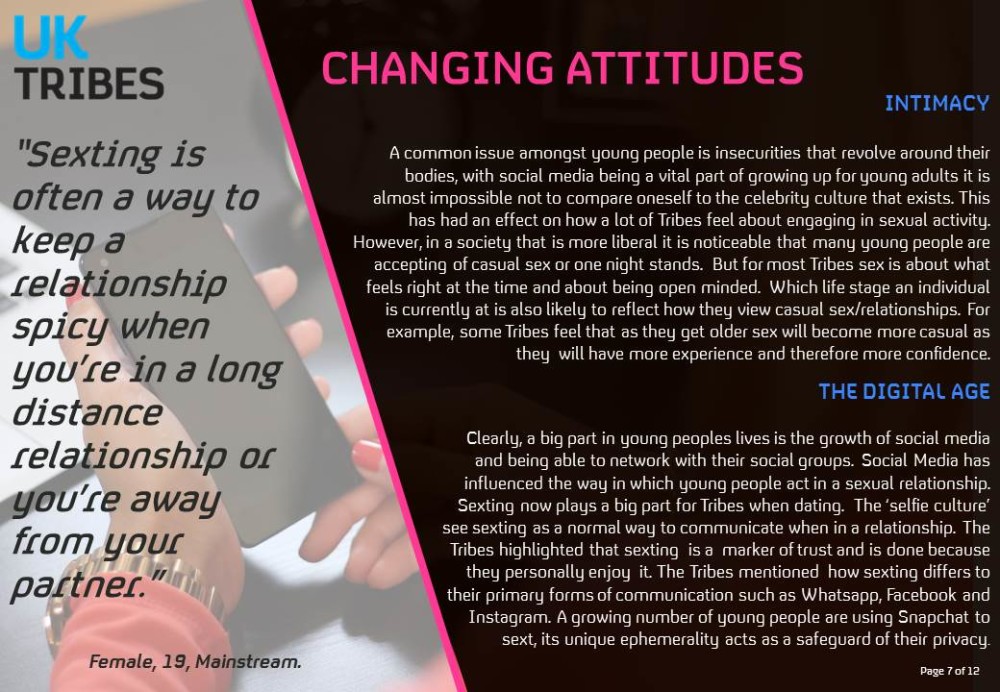 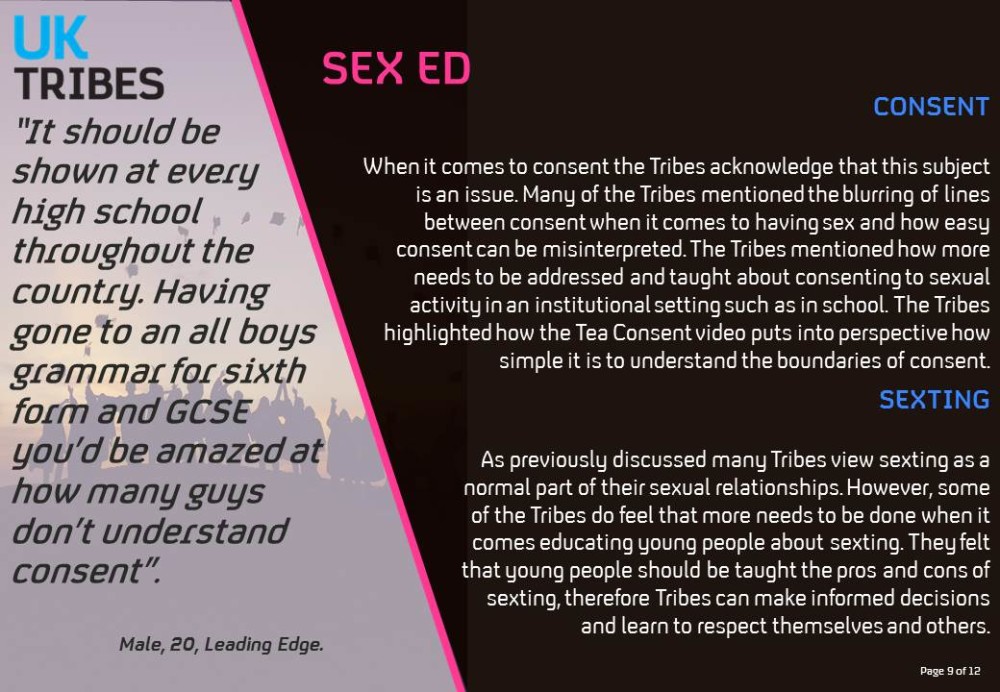 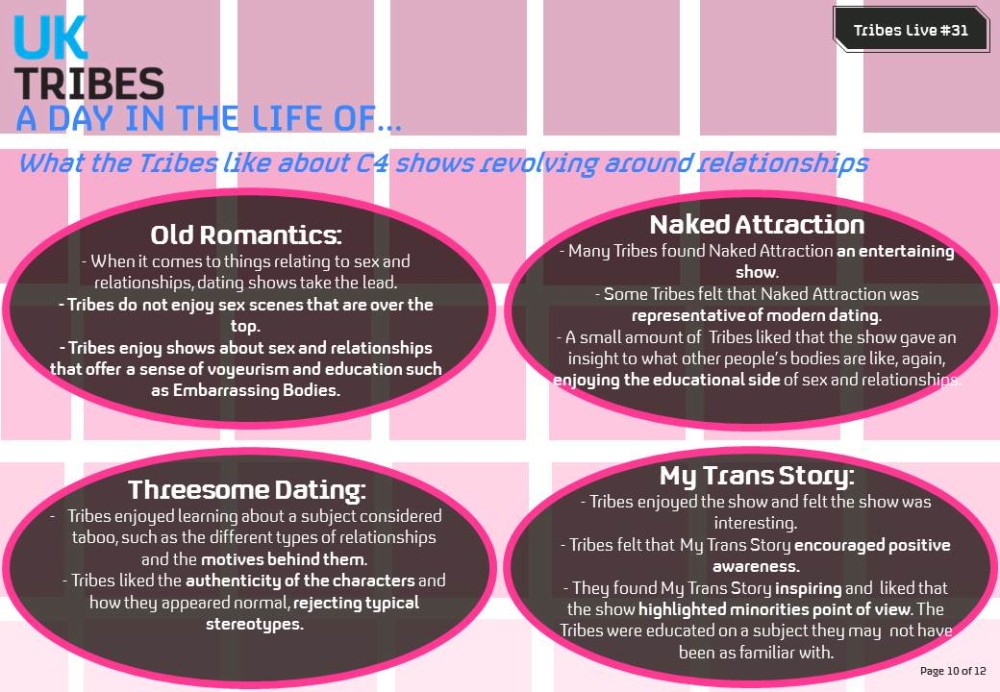 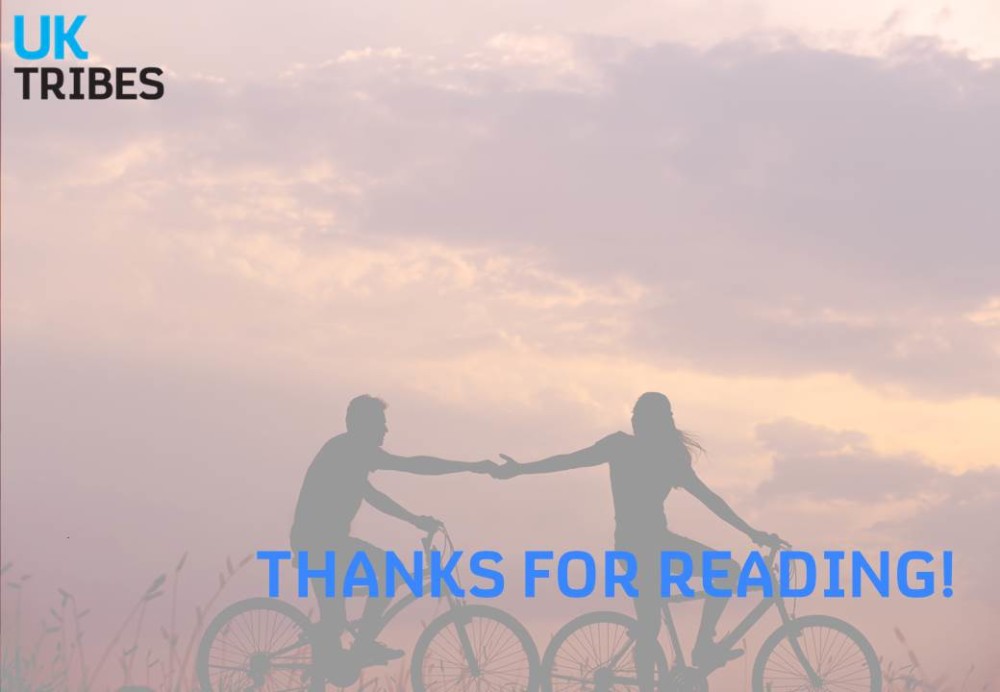 The Tribes are a generation who are finding new ways to meet and form relationships.

Apps such as Tinder have made it socially acceptable for young adults to participate in Online Dating. The prospect of matching with people you have never met is no longer seen as a negative one. With an estimated 50 million people said to be using Tinder globally*. In fact, Tribes had mentioned that Tinder had become a point of discussion amongst their friend groups as well as  enabling Tribes to meet like minded individuals.

However, most of the time dating apps are not used for a long term solution, instead because they are often not taken seriously they are more likely to be a short term fix. Online Dating has also created a sense of superficiality with individuals being judged on face value.

I think dating apps have made online dating much more acceptable and means it now has much less of a stigma attached to it these days.”

“I think these apps seem to be more for casual relationships than anything long term. A lot of them seem to be aimed at hook ups – and can bring out the worst in some people”.
22, Female, Mainstream.

“I’ve been in a serious relationship for 3 years – so completely missed the app dating world scene! They look very useful – but largely shallow and superficial”.
22, Female, Aspirant

“No I am not dating at the moment. I haven’t tried dating apps. Probably because somehow drilled into me is the idea that I won’t find anyone through a dating app”.
23, Female, Urban.

“It’s also fun to sit with friends and swipe through people. I actually know quite a few success stories from Tinder”.
24, Female, Mainstream

“I’m currently travelling so its best to stay single. I only use Tinder when I’m bored and don’t take dating apps seriously”
19, Female, Urban

“I use tinder but mainly for people watching and as a source of entertainment and an ego boost – I don’t really chat to people on it.”
22, Female, Aspirant.

Despite the fact that relationships are not  a main priority of most  young adults,  they are instead viewed as an enhancement to their lives.  An enhancement can be formed when  rapport and trust has been built. In a study with Starcom, 90% of 16-24 year olds said that security was the most important need for them. This study relates back to the idea that relationships can be associated with a sense of security.

For many of the youth generation large displays of public affection such as  Valentines Day are often seen as overly commercialized and as a result segregate a large proportion of those who are single out.  Those who were in a relationship tend to see Valentines Day as a way of showing their partner appreciation and look forward to this indulgence. Evidently, this idea was polarized by a lot of those who were single. This is because they felt that the commercialization was unnecessary because love and appreciation should be shown every day. Expressions of love are not only refined to a partner, friends can now also feel that void too, with some Tribes opting to spend Valentines Day with their friends instead.

Valentines Day is meant to be a day for couples. Ironically its singletons who feel it the most. As someone who has never been in a relationship – it is the most depressing day of the year for me.”

Collectively, relationships are seen as an enhancement. However, there were polarised views between those single and dating on Valentines Day and who they spent the day with.

“I think you should only be with someone if they enhance your life and you’re really into them . People should learn to be happy by themselves first, because as cliché as it is, happiness comes from within and no one should rely on someone else to procure that.”

“I LOVE Valentines day now I am in a long term relationship. I’ll be spending it with my boyfriend – were going to see Deadpool and grabbing some dinner. He’s also organised me a treasure hunt! When I was single I’d spend valentines with my single friends and go out on the town!“

“This is the day I will be celebrating like I have the last 19 years!! Single! I think that the entire idea is all a gimmick and a way for business to cash in and get their money … I don’t think that we need one specific day to show your love to the special person – You should do this each and every day. I am spending the day with family – just because it will be a normal Sunday in my household.”

“On Valentines day this year I spent the day doing the things I love and seeing some of my friends. I think it is important to take time and appreciate the good things in life.”

A common issue amongst young people is insecurities that revolve around their bodies, with social media being a vital part of growing up for young adults it is almost impossible not to compare oneself to the celebrity culture that exists. This has had an effect on how a lot of Tribes feel about engaging in sexual activity. However, in a society that is more liberal it is noticeable that many young people are accepting of casual sex or one night stands.  But for most Tribes sex is about what feels right at the time and about being open minded.  Which life stage an individual is currently at is also likely to reflect how they view casual sex/relationships. For example, some Tribes feel that as they get older sex will become more casual as they  will have more experience and therefore more confidence.

Clearly, a big part in young peoples lives is the growth of social media and being able to network with their social groups.  Social Media has influenced the way in which young people act in a sexual relationship.  Sexting now plays a big part for Tribes when dating.  The ‘selfie culture’  see sexting as a normal way to communicate when in a relationship. The Tribes highlighted that sexting  is a  marker of trust and is done because they personally enjoy  it. The Tribes mentioned  how sexting differs to their primary forms of communication such as Whatsapp, Facebook and Instagram. A growing number of young people are using Snapchat to  sext, its unique ephemerality acts as a safeguard of their privacy.

Sexting is often a way to keep a relationship spicy when you’re in a long distance relationship or you’re away from your partner.”

Dating is changing for Tribes, created by a celebrity culture and a more liberal society. Tribes also use Sexting as a way of communicating to their partner.

“I’m torn between mildly important and not important because for me, engaging in sex allows an individual to be vulnerable with another person.  For me personally, I don’t think I would be able to allow just anybody to see an almost primal side of me. I’d be a lot more comfortable knowing the other person cared about me.”

“I am more comfortable having a sexual relationship with someone I’m dating but I’ve recently been more open to the idea of a friends with benefits relationship.”

“I think technology has more of an effect than social media – as it has become easier to do.”

“Sexting is something I have done whilst being in a relationship and it’s the norm to do so as it gives a bit of fire to talking when you don’t see each other or are doing long distance.”

“I have sexted – and that is probably only down to Snapchat. Knowing that the person you sending a message or picture wont have a permanent copy has massively encouraged sexting.”

When it comes to consent the Tribes acknowledge that this subject is an issue. Many of the Tribes mentioned the blurring of lines between consent when it comes to having sex and how easy consent can be misinterpreted. The Tribes mentioned how more needs to be addressed and taught about consenting to sexual activity in an institutional setting such as in school. The Tribes highlighted how the Tea Consent video puts into perspective how simple it is to understand the boundaries of consent.

As previously discussed many Tribes view sexting as a normal part of their sexual relationships. However, some of the Tribes do feel that more needs to be done when it comes educating young people about sexting. They felt that young people should be taught the pros and cons of sexting, therefore Tribes can make informed decisions and learn to respect themselves and others.

It should be shown at every high school throughout the country. Having gone to an all boys grammar for sixth form and GCSE you’d be amazed at how many guys don’t understand consent”.

A DAY IN THE LIFE OF…

What the Tribes like about C4 shows revolving around relationships

Social media & its impact on society and mental health

Whether or not social media has a negative effect on young people today is something that’s up for debate. Whether it ... Read more about Social media & its impact on society and mental health
Your Browser is Outdated!
To experience this and other websites the way they're meant to be experienced, we recommend you update your browser.
Learn More and Update Your Browser