Social media & its impact on society and mental health 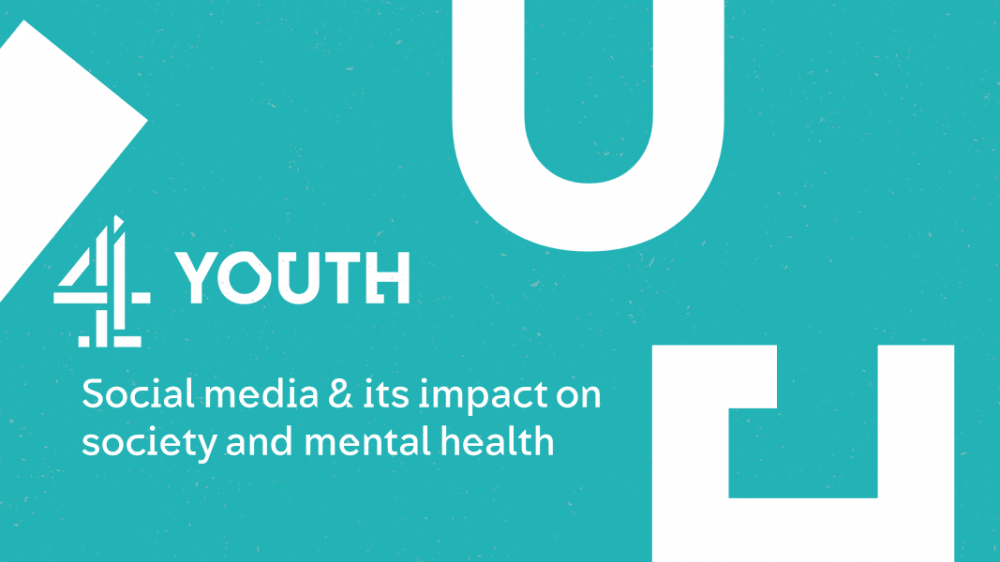 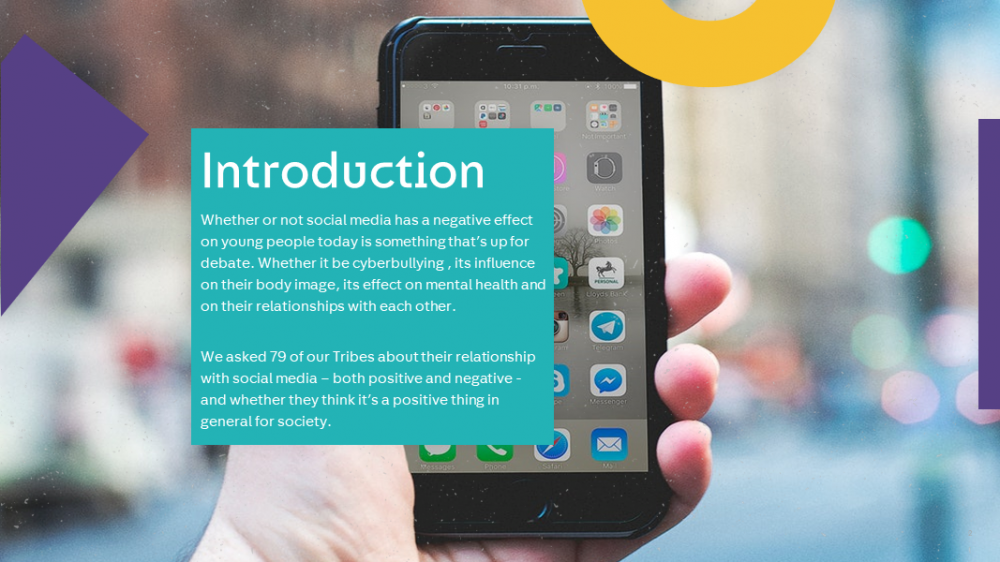 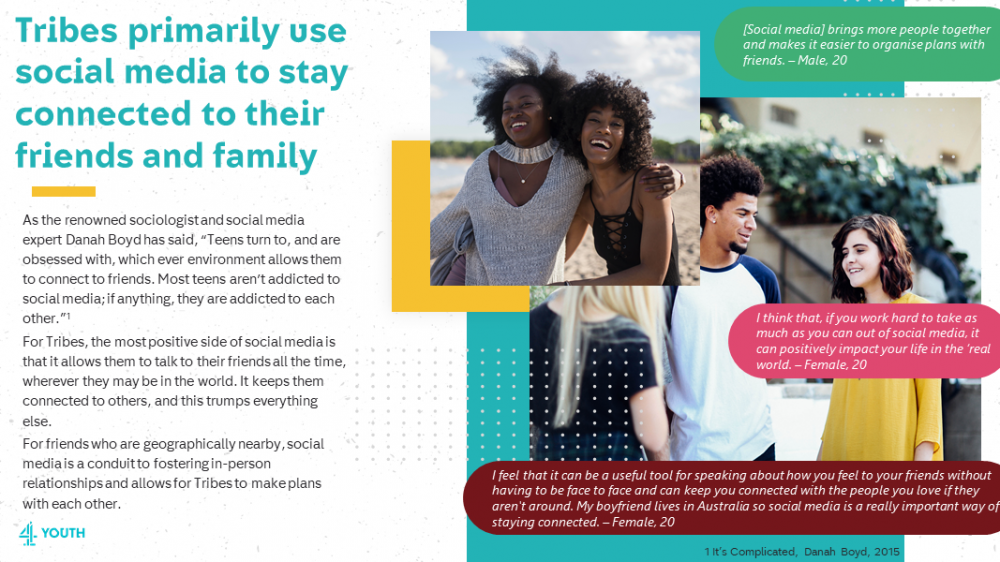 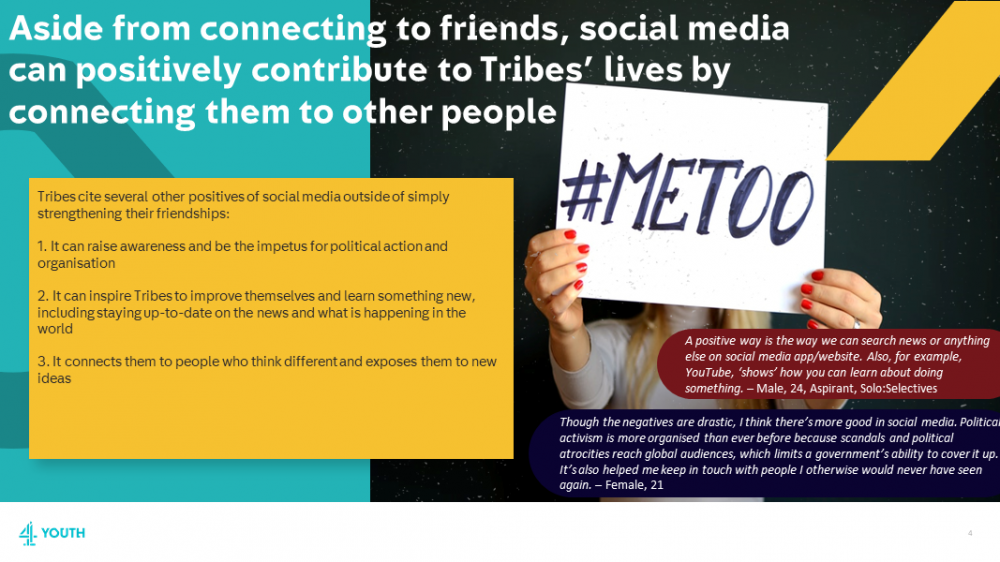 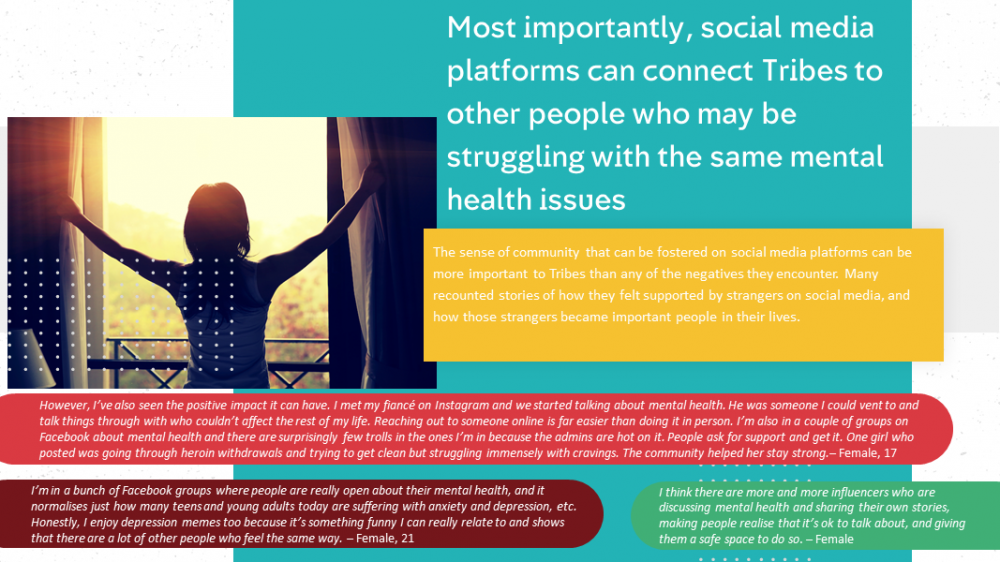 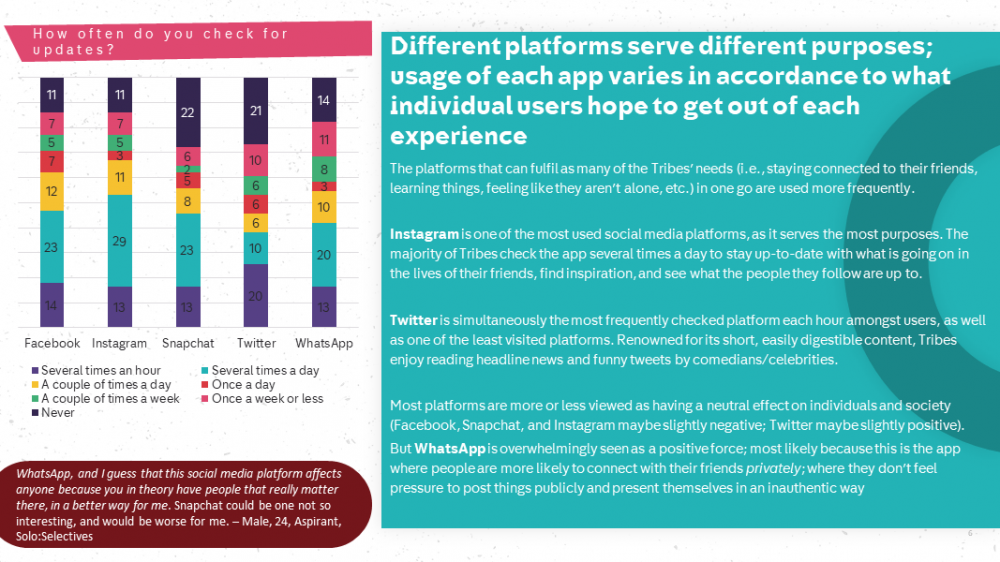 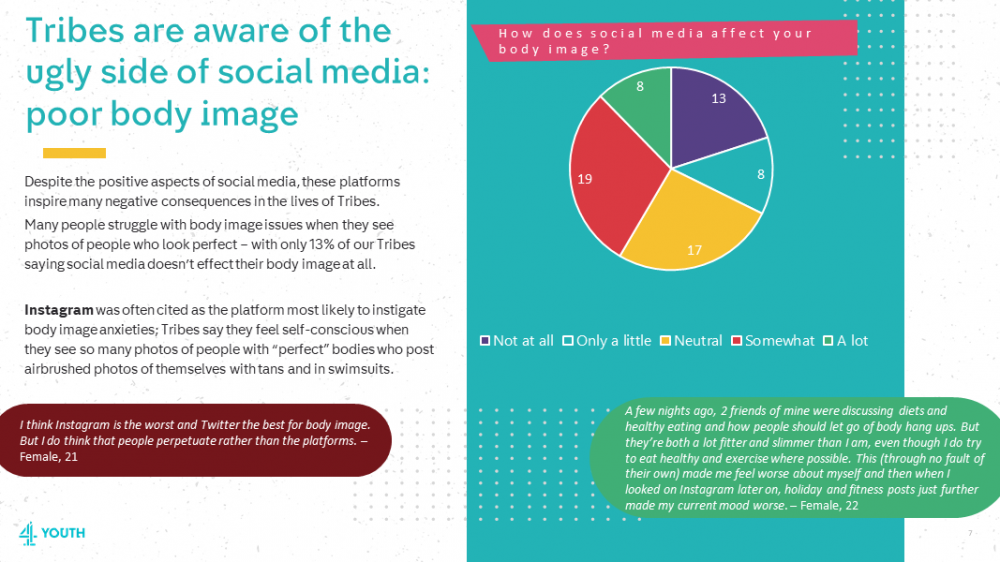 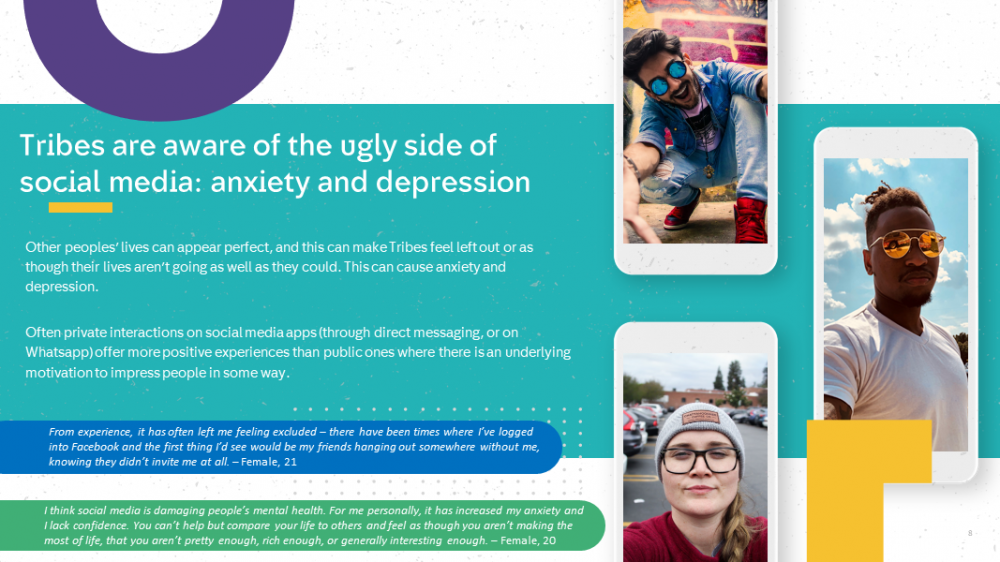 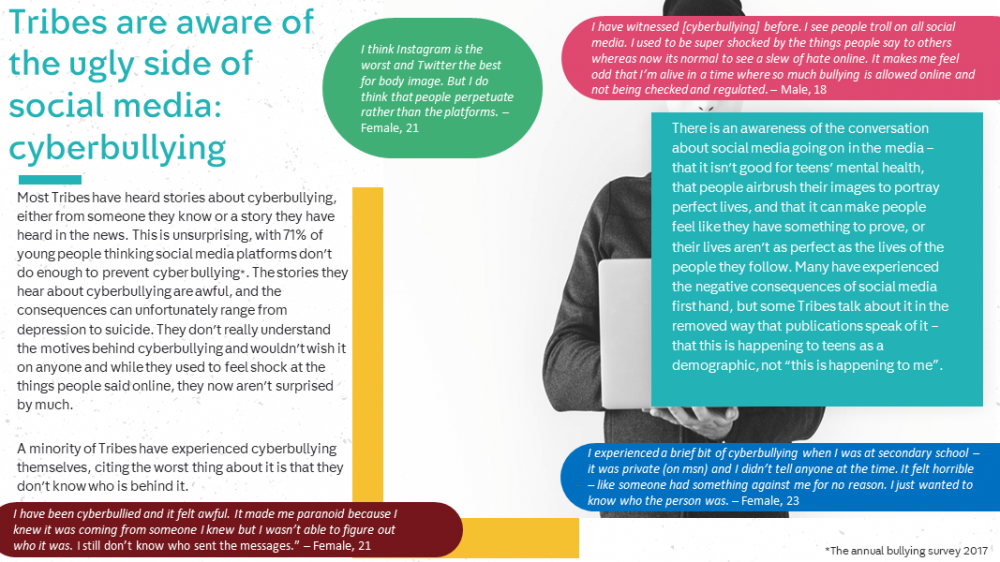 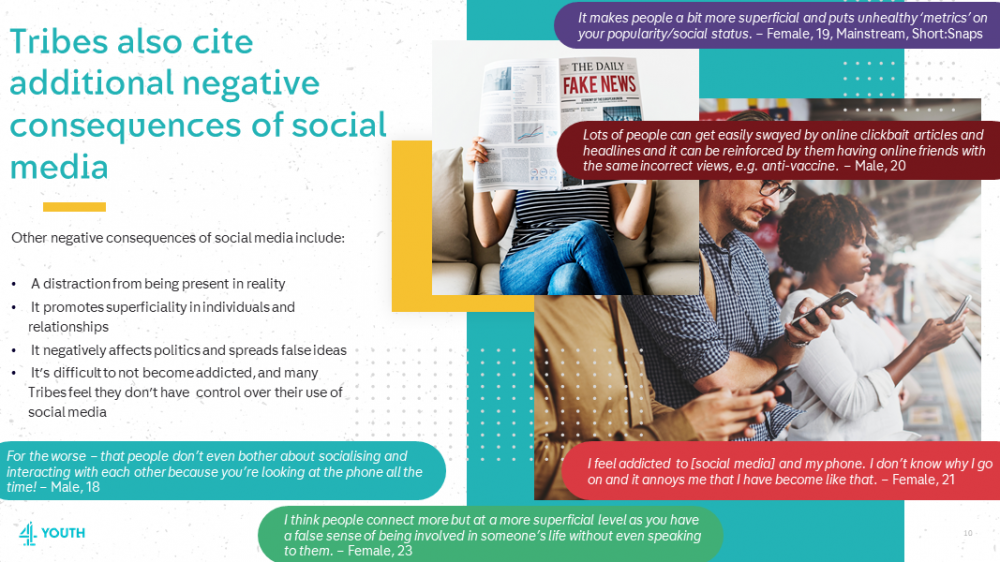 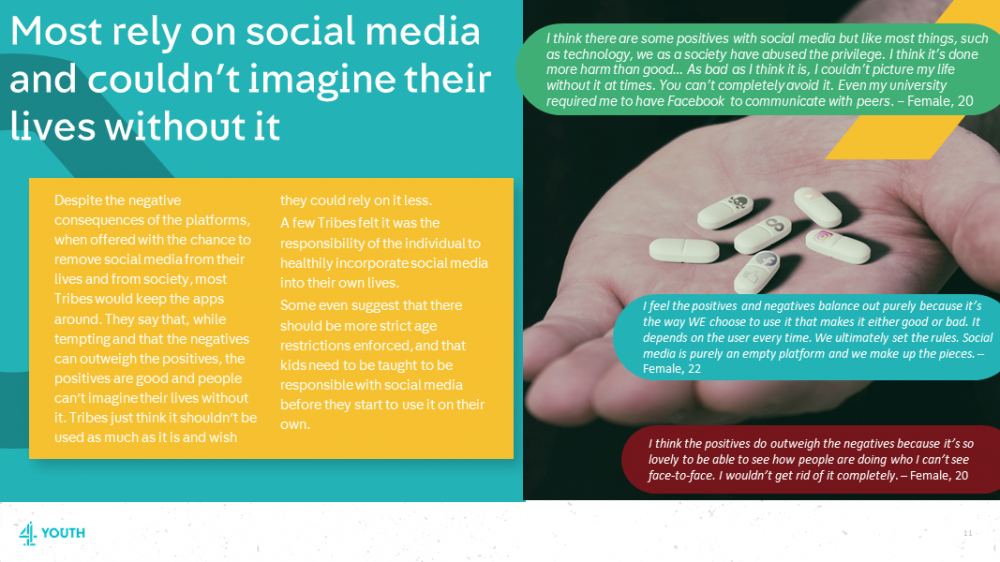 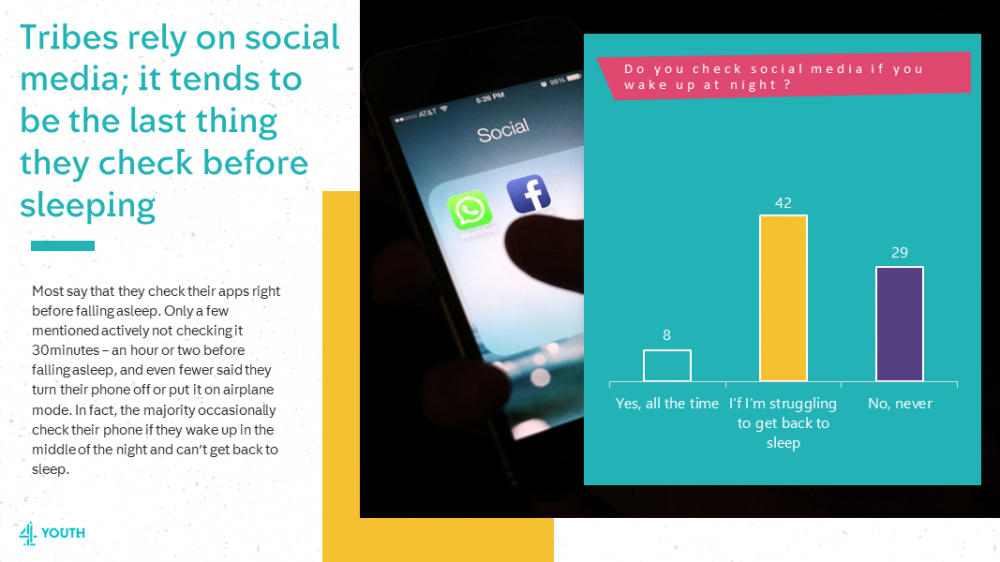 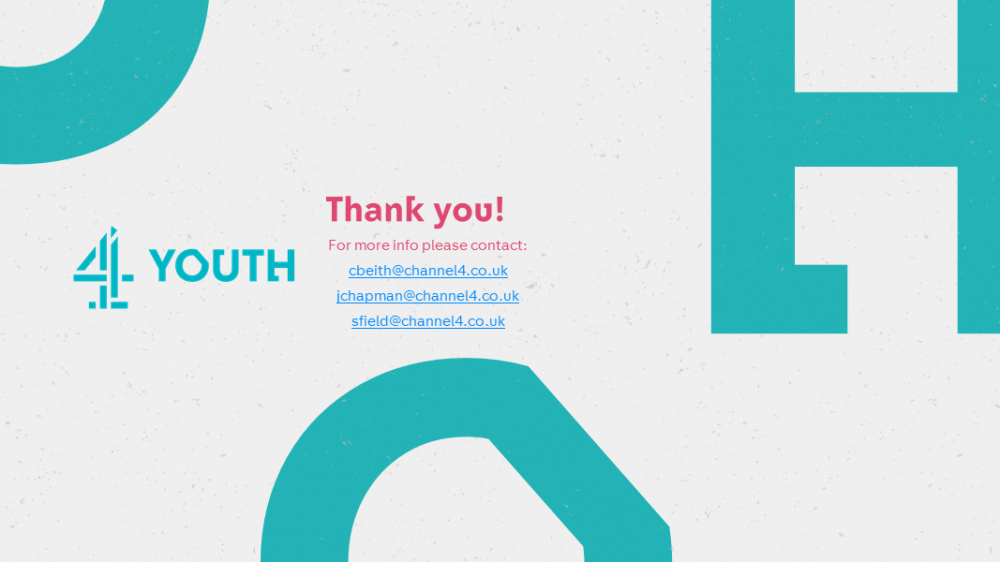 Whether or not social media has a negative effect on young people today is something that’s up for debate. Whether it be cyberbullying , its influence on their body image, its effect on mental health and on their relationships with each other.

We asked 79 of our Tribes about their relationship with social media – both positive and negative – and whether they think it’s a positive thing in general for society.

“I feel that it can be a useful tool for speaking about how you feel to your friends without having to be face to face and can keep you connected with the people you love if they aren’t around. My boyfriend lives in Australia so social media is a really important way of staying connected.” – Female, 20

As the renowned sociologist and social media expert Danah Boyd has said, “Teens turn to, and are obsessed with, which ever environment allows them to connect to friends. Most teens aren’t addicted to social media; if anything, they are addicted to each other.”1

For Tribes, the most positive side of social media is that it allows them to talk to their friends all the time, wherever they may be in the world. It keeps them connected to others, and this trumps everything else.

For friends who are geographically nearby, social media is a conduit to fostering in-person relationships and allows for Tribes to make plans with each other.

A positive way is the way we can search news or anything else on social media app/website. Also, for example, YouTube, ‘shows’ how you can learn about doing something.” – Male, 24, Aspirant, Solo:Selectives

Aside from connecting to friends, social media can positively contribute to Tribes’ lives by connecting them to other people

Tribes cite several other positives of social media outside of simply strengthening their friendships:

1) It can raise awareness and be the impetus for political action and organisation
2) It can inspire Tribes to improve themselves and learn something new, including staying up-to-date on the news and what is happening in the world
3) It connects them to people who think different and exposes them to new ideas

“Though the negatives are drastic, I think there’s more good in social media. Political activism is more organised than ever before because scandals and political atrocities reach global audiences, which limits a government’s ability to cover it up. It’s also helped me keep in touch with people I otherwise would never have seen again.” – Female, 21

Most importantly, social media platforms can connect Tribes to other people who may be struggling with the same mental health issues

The sense of community that can be fostered on social media platforms can be more important to Tribes than any of the negatives they encounter. Many recounted stories of how they felt supported by strangers on social media, and how those strangers became important people in their lives.

However, I’ve also seen the positive impact it can have. I met my fiancé on Instagram and we started talking about mental health. He was someone I could vent to and talk things through with who couldn’t affect the rest of my life. Reaching out to someone online is far easier than doing it in person. I’m also in a couple of groups on Facebook about mental health and there are surprisingly few trolls in the ones I’m in because the admins are hot on it. People ask for support and get it. One girl who posted was going through heroin withdrawals and trying to get clean but struggling immensely with cravings. The community helped her stay strong.– Female, 17

“I’m in a bunch of Facebook groups where people are really open about their mental health, and it normalises just how many teens and young adults today are suffering with anxiety and depression, etc. Honestly, I enjoy depression memes too because it’s something funny I can really relate to and shows that there are a lot of other people who feel the same way. – Female, 21

“I think there are more and more influencers who are discussing mental health and sharing their own stories, making people realise that it’s ok to talk about, and giving them a safe space to do so. – Female

Different platforms serve different purposes; usage of each app varies in accordance to what individual users hope to get out of each experience

The platforms that can fulfil as many of the Tribes’ needs (i.e., staying connected to their friends, learning things, feeling like they aren’t alone, etc.) in one go are used more frequently.

Instagram is one of the most used social media platforms, as it serves the most purposes. The majority of Tribes check the app several times a day to stay up-to-date with what is going on in the lives of their friends, find inspiration, and see what the people they follow are up to.

Twitter is simultaneously the most frequently checked platform each hour amongst users, as well as one of the least visited platforms. Renowned for its short, easily digestible content, Tribes enjoy reading headline news and funny tweets by comedians/celebrities.

Most platforms are more or less viewed as having a neutral effect on individuals and society (Facebook, Snapchat, and Instagram maybe slightly negative; Twitter maybe slightly positive).

But WhatsApp is overwhelmingly seen as a positive force; most likely because this is the app where people are more likely to connect with their friends privately; where they don’t feel pressure to post things publicly and present themselves in an inauthentic way

“WhatsApp, and I guess that this social media platform affects anyone because you in theory have people that really matter there, in a better way for me. Snapchat could be one not so interesting, and would be worse for me.” – Male, 24, Aspirant, Solo:Selectives

Tribes are aware of the ugly side of social media: poor body image

Despite the positive aspects of social media, these platforms inspire many negative consequences in the lives of Tribes.

Many people struggle with body image issues when they see photos of people who look perfect – with only 13% of our Tribes saying social media doesn’t effect their body image at all.

Instagram was often cited as the platform most likely to instigate body image anxieties; Tribes say they feel self-conscious when they see so many photos of people with “perfect” bodies who post airbrushed photos of themselves with tans and in swimsuits.

“I think Instagram is the worst and Twitter the best for body image. But I do think that people perpetuate rather than the platforms.” – Female, 21

Tribes are aware of the ugly side of social media: anxiety and depression

Most Tribes have heard stories about cyberbullying, either from someone they know or a story they have heard in the news. This is unsurprising, with 71% of young people thinking social media platforms don’t do enough to prevent cyber bullying*. The stories they hear about cyberbullying are awful, and the consequences can unfortunately range from depression to suicide. They don’t really understand the motives behind cyberbullying and wouldn’t wish it on anyone and while they used to feel shock at the things people said online, they now aren’t surprised by much.

A minority of Tribes have experienced cyberbullying themselves, citing the worst thing about it is that they don’t know who is behind it.

There is an awareness of the conversation about social media going on in the media – that it isn’t good for teens’ mental health, that people airbrush their images to portray perfect lives, and that it can make people feel like they have something to prove, or their lives aren’t as perfect as the lives of the people they follow. Many have experienced the negative consequences of social media first hand, but some Tribes talk about it in the removed way that publications speak of it – that this is happening to teens as a demographic, not “this is happening to me”.

“I think Instagram is the worst and Twitter the best for body image. But I do think that people perpetuate rather than the platforms. – Female, 21

“I experienced a brief bit of cyberbullying when I was at secondary school – it was private (on msn) and I didn’t tell anyone at the time. It felt horrible – like someone had something against me for no reason. I just wanted to know who the person was.” – Female, 23

Other negative consequences of social media include:

“For the worse – that people don’t even bother about socialising and interacting with each other because you’re looking at the phone all the time!” – Male, 18

“Lots of people can get easily swayed by online clickbait articles and headlines and it can be reinforced by them having online friends with the same incorrect views, e.g. anti-vaccine.” – Male, 20

Despite the negative consequences of the platforms, when offered with the chance to remove social media from their lives and from society, most Tribes would keep the apps around. They say that, while tempting and that the negatives can outweigh the positives, the positives are good and people can’t imagine their lives without it. Tribes just think it shouldn’t be used as much as it is and wish they could rely on it less.

A few Tribes felt it was the responsibility of the individual to healthily incorporate social media into their own lives.

Some even suggest that there should be more strict age restrictions enforced, and that kids need to be taught to be responsible with social media before they start to use it on their own.

Tribes rely on social media; it tends to be the last thing they check before sleeping

As we draw closer to the start of the academic year, we decided to speak to our community of 16-24s about their attitude... Read more about Young People and Higher Education

TikTok’s rising popularity in a saturated social media market has provoked lots of interest in understanding its appea... Read more about TikTok – An Exploration
Your Browser is Outdated!
To experience this and other websites the way they're meant to be experienced, we recommend you update your browser.
Learn More and Update Your Browser