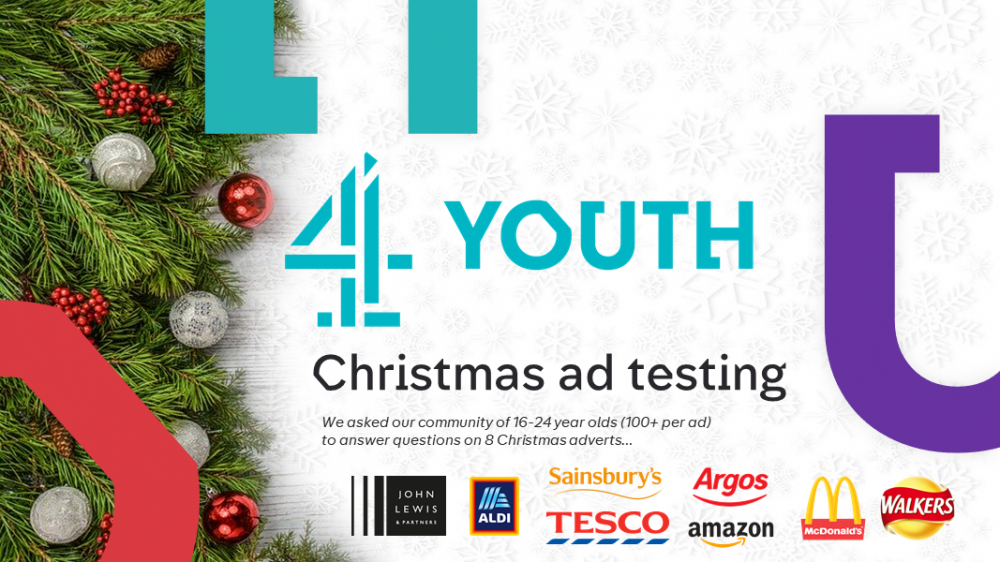 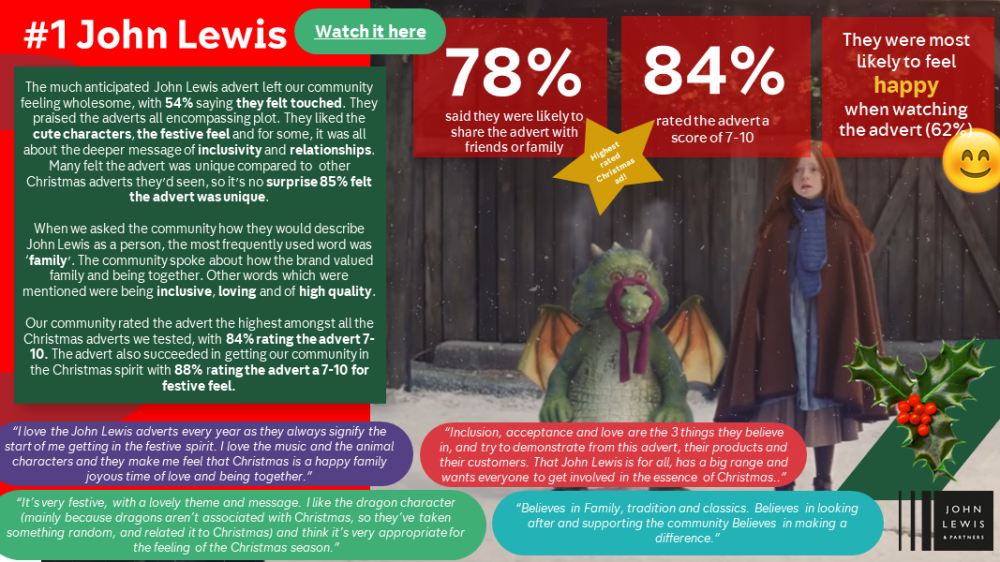 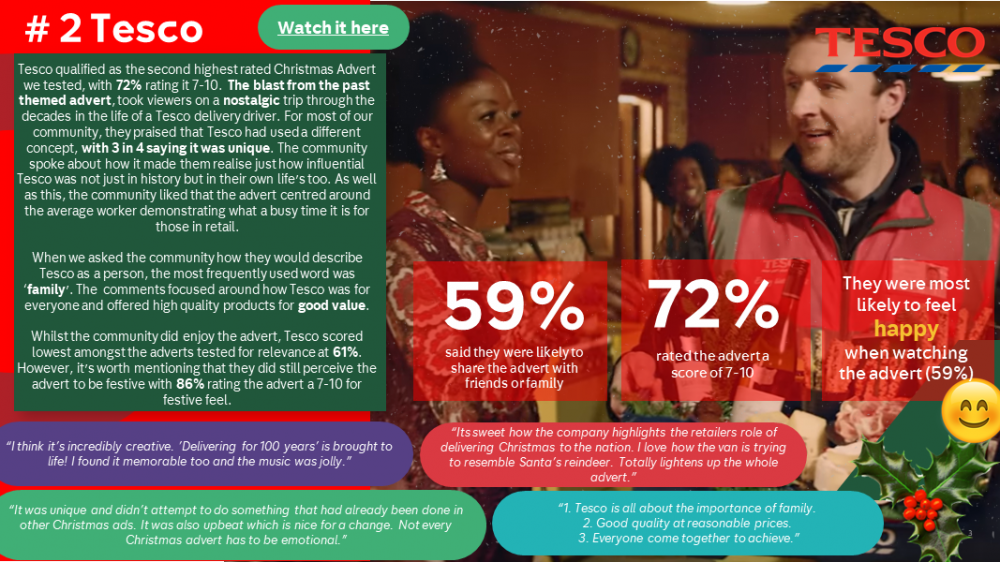 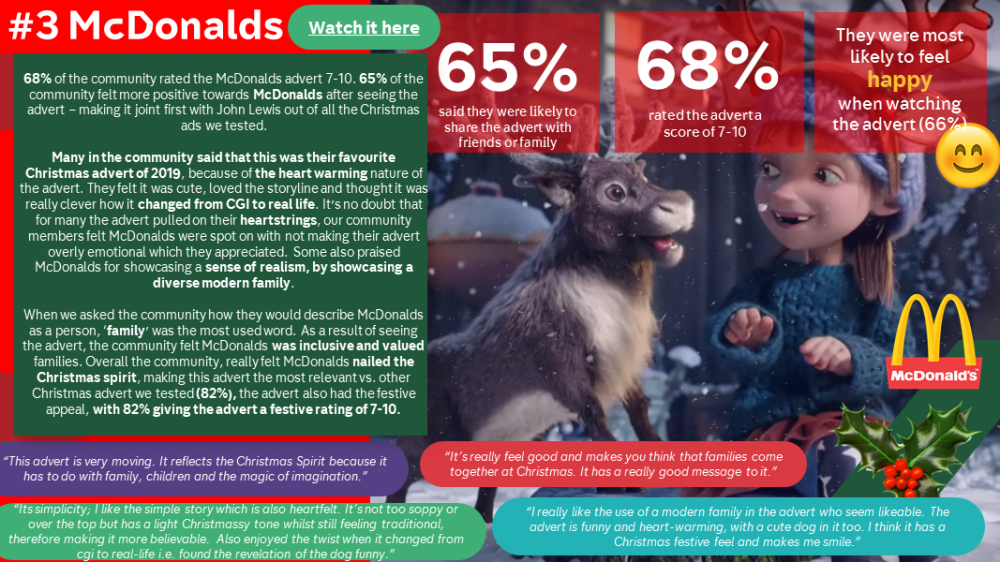 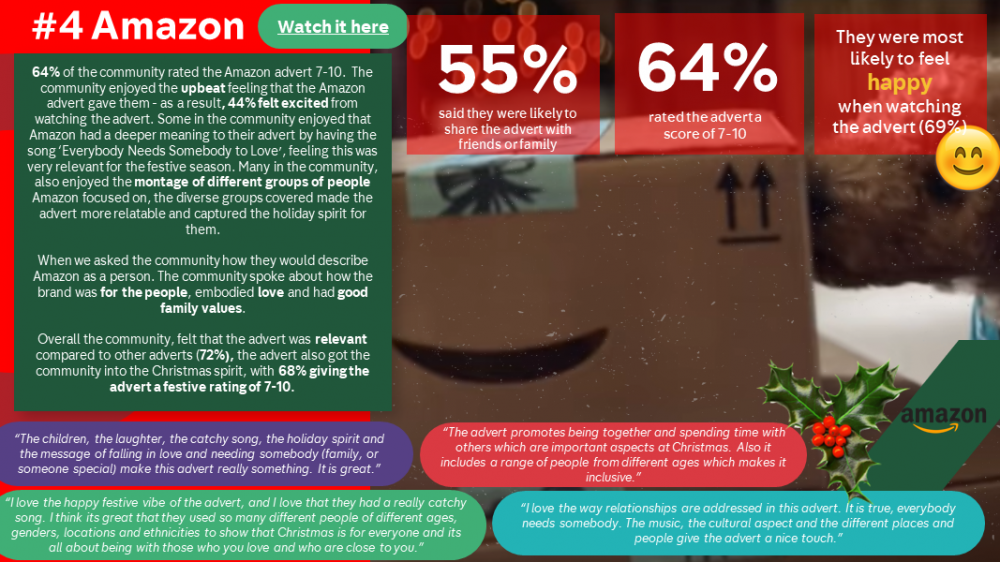 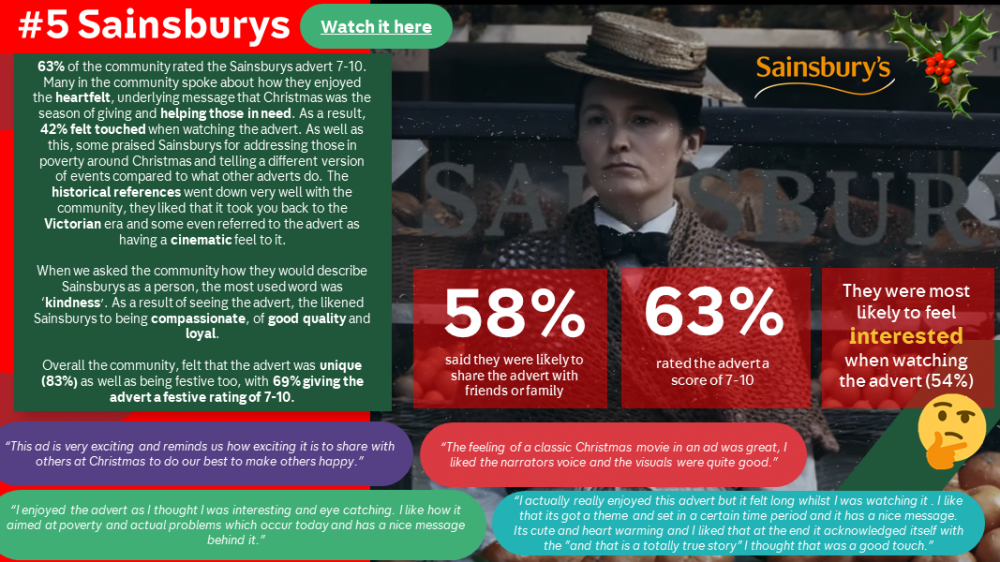 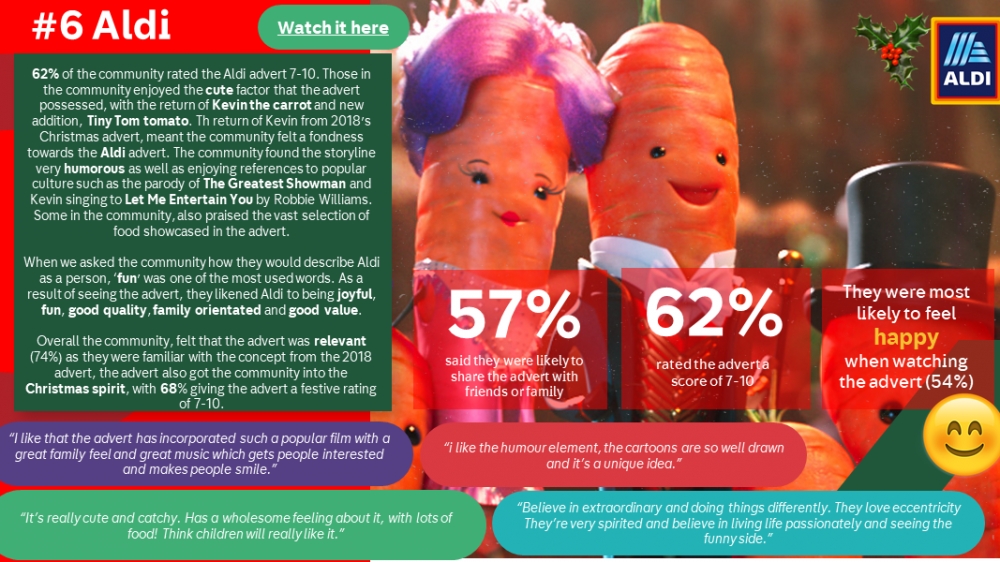 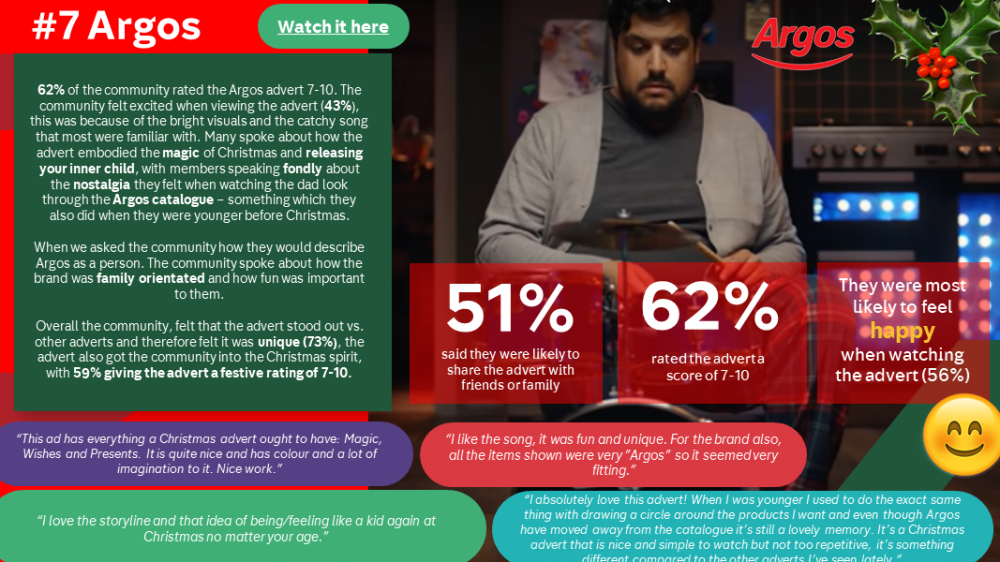 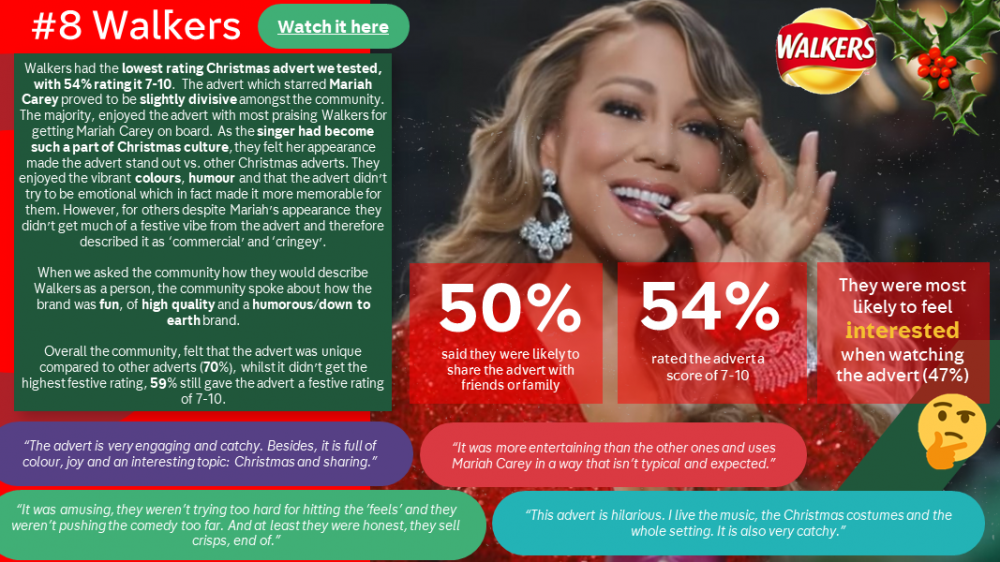 The much anticipated John Lewis advert left our community feeling wholesome, with 54% saying they felt touched. They praised the adverts all encompassing plot. They liked the cute characters, the festive feel and for some, it was all about the deeper message of inclusivity and relationships. Many felt the advert was unique compared to  other Christmas adverts they’d seen, so it’s no surprise 85% felt the advert was unique.

When we asked the community how they would describe John Lewis as a person, the most frequently used word was ‘family’. The community spoke about how the brand valued family and being together. Other words which were mentioned were being inclusive, loving and of high quality.

I love the John Lewis adverts every year as they always signify the start of me getting in the festive spirit. I love the music and the animal characters and they make me feel that Christmas is a happy family joyous time of love and being together.”

“It’s very festive, with a lovely theme and message. I like the dragon character (mainly because dragons aren’t associated with Christmas, so they’ve taken something random, and related it to Christmas) and think it’s very appropriate for the feeling of the Christmas season.”

Tesco qualified as the second highest rated Christmas Advert we tested, with 72% rating it 7-10.  The blast from the past themed advert, took viewers on a nostalgic trip through the decades in the life of a Tesco delivery driver. For most of our community, they praised that Tesco had used a different concept, with 3 in 4 saying it was unique. The community spoke about how it made them realise just how influential Tesco was not just in history but in their own life’s too. As well as this, the community liked that the advert centred around the average worker demonstrating what a busy time it is for those in retail.

When we asked the community how they would describe Tesco as a person, the most frequently used word was ‘family’. The  comments focused around how Tesco was for everyone and offered high quality products for good value.

Whilst the community did enjoy the advert, Tesco scored lowest amongst the adverts tested for relevance at 61%. However, it’s worth mentioning that they did still perceive the advert to be festive with 86% rating the advert a 7-10 for festive feel.

“ think it’s incredibly creative. ‘Delivering for 100 years’ is brought to life! I found it memorable too and the music was jolly.”

“Its sweet how the company highlights the retailers role of delivering Christmas to the nation. I love how the van is trying to resemble Santa’s reindeer. Totally lightens up the whole advert.”

Many in the community said that this was their favourite Christmas advert of 2019, because of the heart warming nature of the advert. They felt it was cute, loved the storyline and thought it was really clever how it changed from CGI to real life. It’s no doubt that for many the advert pulled on their heartstrings, our community members felt McDonalds were spot on with not making their advert overly emotional which they appreciated. Some also praised McDonalds for showcasing a sense of realism, by showcasing a diverse modern family.

This advert is very moving. It reflects the Christmas Spirit because it has to do with family, children and the magic of imagination.”

I really like the use of a modern family in the advert who seem likeable. The advert is funny and heart-warming, with a cute dog in it too. I think it has a Christmas festive feel and makes me smile.”

64% of the community rated the Amazon advert 7-10.  The community enjoyed the upbeat feeling that the Amazon advert gave them – as a result, 44% felt excited from watching the advert. Some in the community enjoyed that Amazon had a deeper meaning to their advert by having the song ‘Everybody Needs Somebody to Love’, feeling this was very relevant for the festive season. Many in the community, also enjoyed the montage of different groups of people Amazon focused on, the diverse groups covered made the advert more relatable and captured the holiday spirit for them.

When we asked the community how they would describe Amazon as a person. The community spoke about how the brand was for the people, embodied love and had good family values.

The children, the laughter, the catchy song, the holiday spirit and the message of falling in love and needing somebody (family, or someone special) make this advert really something. It is great.”

I love the way relationships are addressed in this advert. It is true, everybody needs somebody. The music, the cultural aspect and the different places and people give the advert a nice touch.”

63% of the community rated the Sainsburys advert 7-10. Many in the community spoke about how they enjoyed the heartfelt, underlying message that Christmas was the season of giving and helping those in need. As a result, 42% felt touched when watching the advert. As well as this, some praised Sainsburys for addressing those in poverty around Christmas and telling a different version of events compared to what other adverts do. The historical references went down very well with the community, they liked that it took you back to the Victorian era and some even referred to the advert as having a cinematic feel to it.

When we asked the community how they would describe Sainsburys as a person, the most used word was ‘kindness’. As a result of seeing the advert, the likened Sainsburys to being compassionate, of good quality and loyal.

Overall the community, felt that the advert was unique (83%) as well as being festive too, with 69% giving the advert a festive rating of 7-10.

I enjoyed the advert as I thought I was interesting and eye catching. I like how it aimed at poverty and actual problems which occur today and has a nice message behind it.”

“I actually really enjoyed this advert but it felt long whilst I was watching it . I like that its got a theme and set in a certain time period and it has a nice message. Its cute and heart warming and I liked that at the end it acknowledged itself with the “and that is a totally true story” I thought that was a good touch.”

When we asked the community how they would describe Aldi as a person, ‘fun’ was one of the most used words. As a result of seeing the advert, they likened Aldi to being joyful, fun, good quality, family orientated and good value.

Overall the community, felt that the advert was relevant (74%) as they were familiar with the concept from the 2018 advert, the advert also got the community into the Christmas spirit, with 68% giving the advert a festive rating of 7-10.

I like that the advert has incorporated such a popular film with a great family feel and great music which gets people interested and makes people smile.”

“Believe in extraordinary and doing things differently. They love eccentricity They’re very spirited and believe in living life passionately and seeing the funny side.”

62% of the community rated the Argos advert 7-10. The community felt excited when viewing the advert (43%), this was because of the bright visuals and the catchy song that most were familiar with. Many spoke about how the advert embodied the magic of Christmas and releasing your inner child, with members speaking fondly about the nostalgia they felt when watching the dad look through the Argos catalogue – something which they also did when they were younger before Christmas.

When we asked the community how they would describe Argos as a person. The community spoke about how the brand was family orientated and how fun was important to them.

Overall the community, felt that the advert stood out vs. other adverts and therefore felt it was unique (73%), the advert also got the community into the Christmas spirit, with 59% giving the advert a festive rating of 7-10.

This ad has everything a Christmas advert ought to have: Magic, Wishes and Presents. It is quite nice and has colour and a lot of imagination to it. Nice work.”

“I absolutely love this advert! When I was younger I used to do the exact same thing with drawing a circle around the products I want and even though Argos have moved away from the catalogue it’s still a lovely memory. It’s a Christmas advert that is nice and simple to watch but not too repetitive, it’s something different compared to the other adverts I’ve seen lately.”

Walkers had the lowest rating Christmas advert we tested, with 54% rating it 7-10.  The advert which starred Mariah Carey proved to be slightly divisive amongst the community. The majority, enjoyed the advert with most praising Walkers for getting Mariah Carey on board. As the singer had become such a part of Christmas culture, they felt her appearance made the advert stand out vs. other Christmas adverts. They enjoyed the vibrant colours, humour and that the advert didn’t try to be emotional which in fact made it more memorable for them. However, for others despite Mariah’s appearance they didn’t get much of a festive vibe from the advert and therefore described it as ‘commercial’ and ‘cringey’.

When we asked the community how they would describe Walkers as a person, the community spoke about how the brand was fun, of high quality and a humorous/down to earth brand.

The advert is very engaging and catchy. Besides, it is full of colour, joy and an interesting topic: Christmas and sharing.”

“This advert is hilarious. I live the music, the Christmas costumes and the whole setting. It is also very catchy.”

“It was more entertaining than the other ones and uses Mariah Carey in a way that isn’t typical and expected.”

“It was amusing, they weren’t trying too hard for hitting the ‘feels’ and they weren’t pushing the comedy too far. And at least they were honest, they sell crisps, end of.”

Young people are most worried about climate change and pollution, the effects of which they fear will ultimately lead to... Read more about Young People and The Environment

Introduction We asked 107 of our Tribes their opinion on Nike’s recent  ‘Dream Crazier ad’. We wanted to take a l... Read more about Nike “Dream Crazier” 2019 Advert
This website works best with cookies. They allow us to see how the site is being used.
If you continue without changing your settings, we will assume you are happy to receive cookies.
Accept Learn More
Your Browser is Outdated!
To experience this and other websites the way they're meant to be experienced, we recommend you update your browser.
Learn More and Update Your Browser