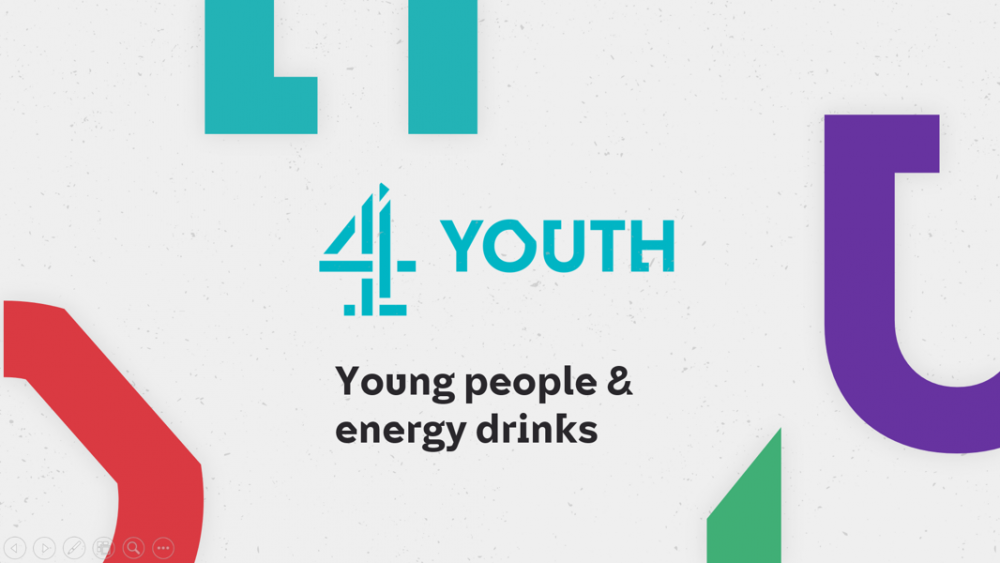 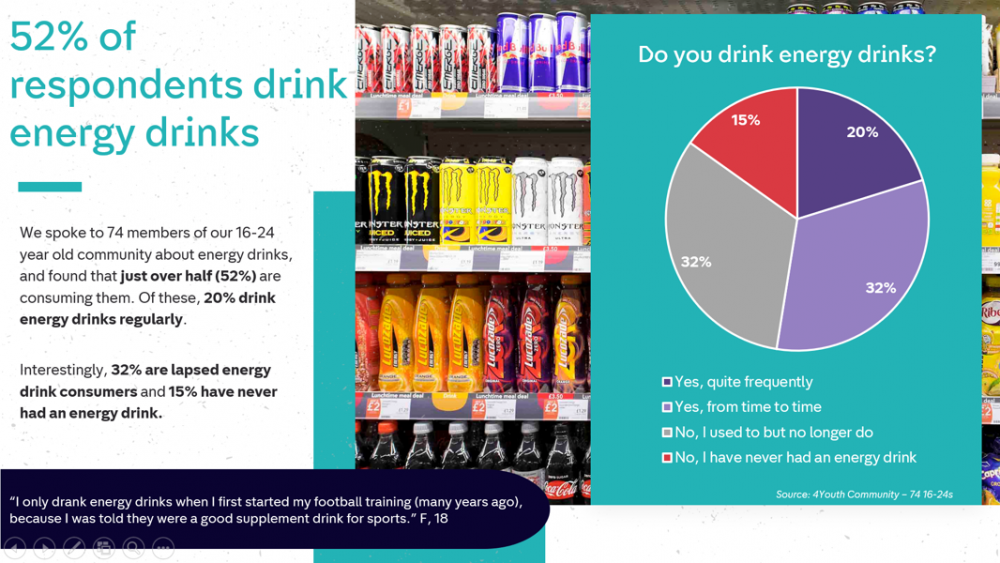 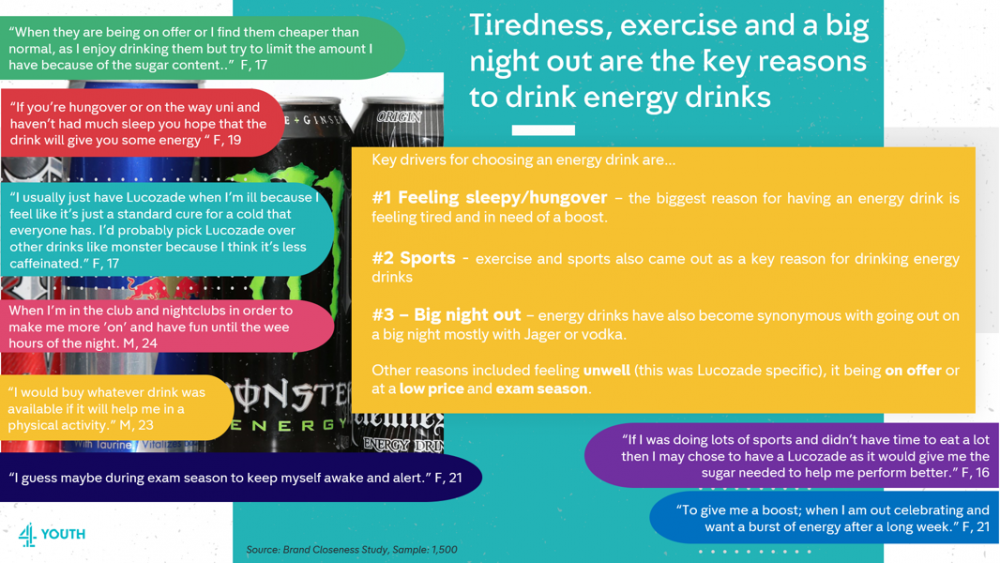 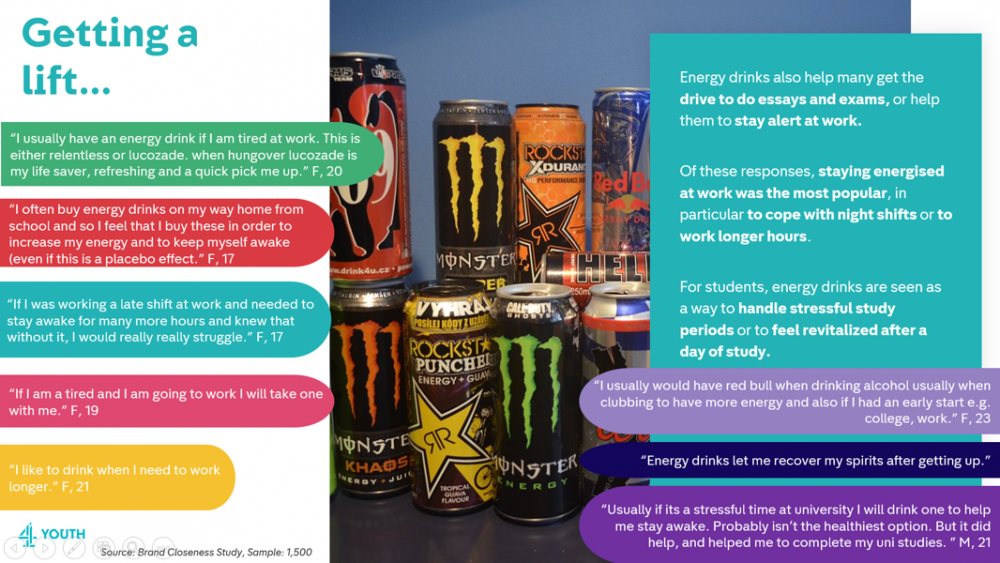 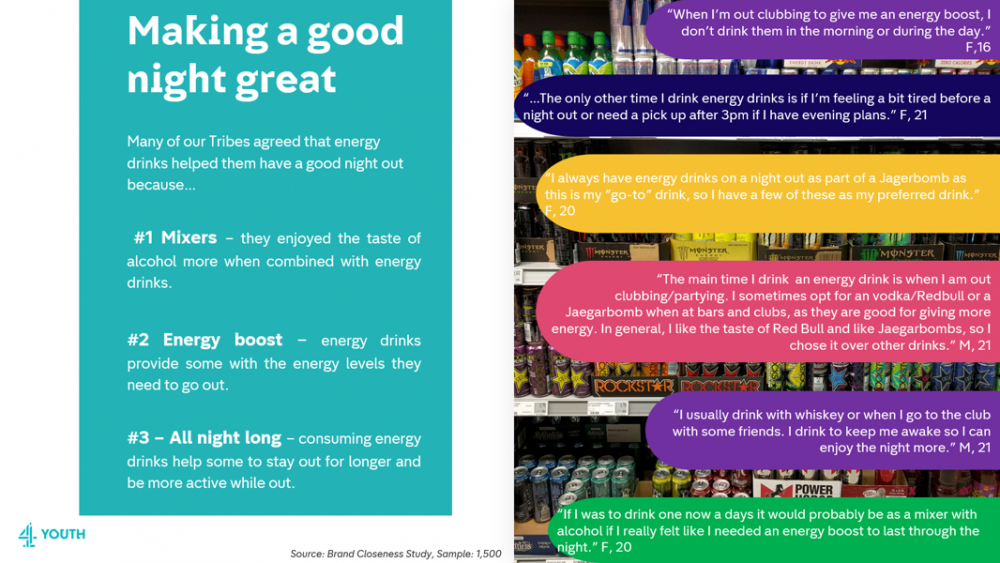 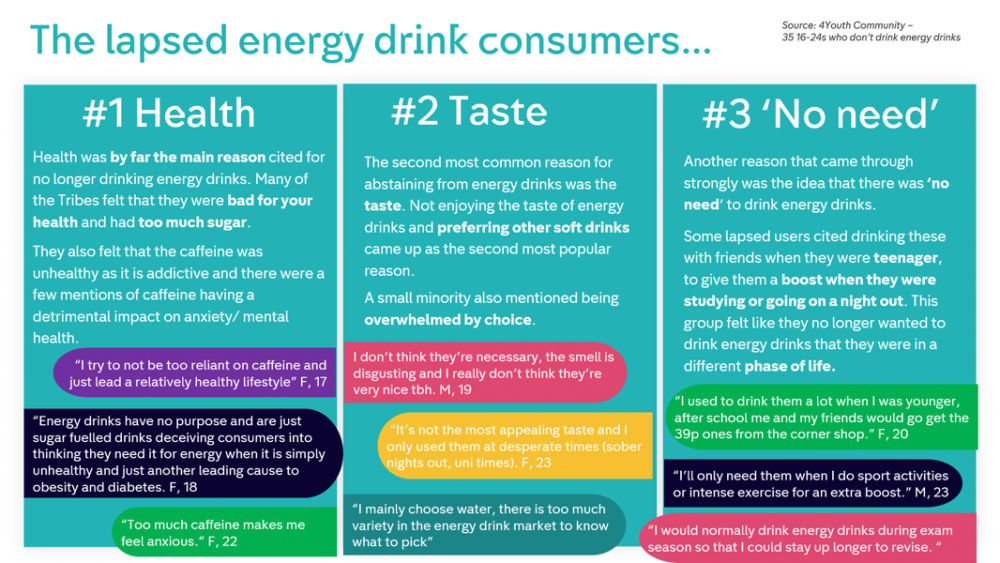 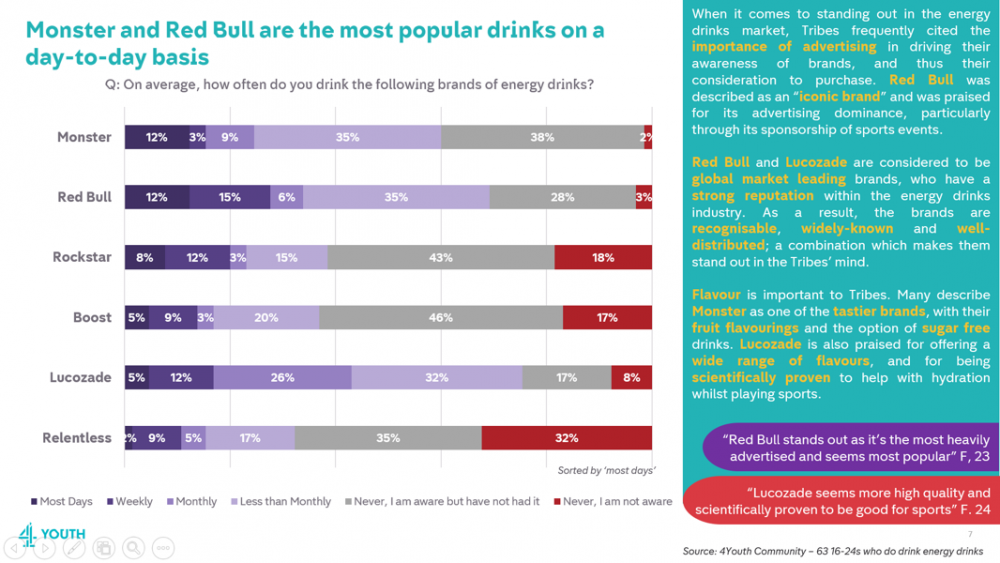 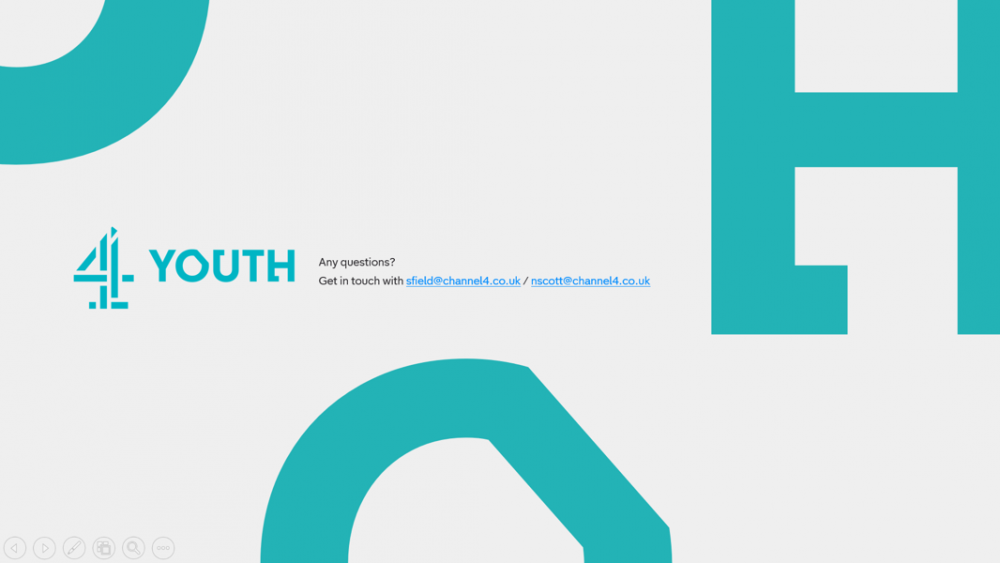 We spoke to 74 members of our 16-24 year old community about energy drinks, and found that just over half (52%) are consuming them. Of these, 20% drink energy drinks regularly.

Interestingly, 32% are lapsed energy drink consumers and 15% have never had an energy drink.

Tiredness, exercise and a big night out are the key reasons to drink energy drinks

Key drivers for choosing an energy drink are…

#1 Feeling sleepy/hungover – the biggest reason for having an energy drink is feeling tired and in need of a boost.

#3 – Big night out – energy drinks have also become synonymous with going out on a big night mostly with Jager or vodka.

Other reasons included feeling unwell (this was Lucozade specific), it being on offer or at a low price and exam season.

“When they are being on offer or I find them cheaper than normal, as I enjoy drinking them but try to limit the amount I have because of the sugar content..”  F, 17

“If you’re hungover or on the way uni and haven’t had much sleep you hope that the drink will give you some energy “ F, 19

“I would buy whatever drink was available if it will help me in a physical activity.” M, 23

Energy drinks also help many get the drive to do essays and exams, or help them to stay alert at work.

Of these responses, staying energised at work was the most popular, in particular to cope with night shifts or to work longer hours.

For students, energy drinks are seen as a way to handle stressful study periods or to feel revitalized after a day of study.

“I usually have an energy drink if I am tired at work. This is either relentless or lucozade. when hungover lucozade is my life saver, refreshing and a quick pick me up.” F, 20

“I usually would have red bull when drinking alcohol usually when clubbing to have more energy and also if I had an early start e.g. college, work.” F, 23

“Usually if its a stressful time at university I will drink one to help me stay awake. Probably isn’t the healthiest option. But it did help, and helped me to complete my uni studies. ” M, 21

#1 Mixers – they enjoyed the taste of alcohol more when combined with energy drinks.

#2 Energy boost – energy drinks provide some with the energy levels they need to go out.

#3 – All night long – consuming energy drinks help some to stay out for longer and be more active while out.

“…The only other time I drink energy drinks is if I’m feeling a bit tired before a night out or need a pick up after 3pm if I have evening plans.” F, 21

“The main time I drink  an energy drink is when I am out clubbing/partying. I sometimes opt for an vodka/Redbull or a Jaegarbomb when at bars and clubs, as they are good for giving more energy. In general, I like the taste of Red Bull and like Jaegarbombs, so I chose it over other drinks.” M, 21

“I usually drink with whiskey or when I go to the club with some friends. I drink to keep me awake so I can enjoy the night more.” M, 21

Health was by far the main reason cited for no longer drinking energy drinks. Many of the Tribes felt that they were bad for your health and had too much sugar.

They also felt that the caffeine was unhealthy as it is addictive and there were a few mentions of caffeine having a detrimental impact on anxiety/ mental health.

“I try to not be too reliant on caffeine and just lead a relatively healthy lifestyle” F, 17

“Energy drinks have no purpose and are just sugar fuelled drinks deceiving consumers into thinking they need it for energy when it is simply unhealthy and just another leading cause to obesity and diabetes. F, 18

A small minority also mentioned being overwhelmed by choice.

“It’s not the most appealing taste and I only used them at desperate times (sober nights out, uni times). F, 23

Another reason that came through strongly was the idea that there was ‘no need’ to drink energy drinks.

Some lapsed users cited drinking these with friends when they were teenager,  to give them a boost when they were studying or going on a night out. This group felt like they no longer wanted to drink energy drinks that they were in a different phase of life.

“I used to drink them a lot when I was younger, after school me and my friends would go get the 39p ones from the corner shop.” F, 20

“I’ll only need them when I do sport activities or intense exercise for an extra boost.” M, 23

When it comes to standing out in the energy drinks market, Tribes frequently cited the importance of advertising in driving their awareness of brands, and thus their consideration to purchase. Red Bull was described as an “iconic brand” and was praised for its advertising dominance, particularly through its sponsorship of sports events.

Red Bull and Lucozade are considered to be global market leading brands, who have a strong reputation within the energy drinks industry. As a result, the brands are recognisable, widely-known and well-distributed; a combination which makes them stand out in the Tribes’ mind.

Flavour is important to Tribes. Many describe Monster as one of the tastier brands, with their fruit flavourings and the option of sugar free drinks. Lucozade is also praised for offering a wide range of flavours, and for being scientifically proven to help with hydration whilst playing sports.

“Red Bull stands out as it’s the most heavily advertised and seems most popular” F, 23

This report is made up of three 4Youth tasks we sent to the community. The report explores: body image perceptions, well... Read more about Body image, Diets & Exercise