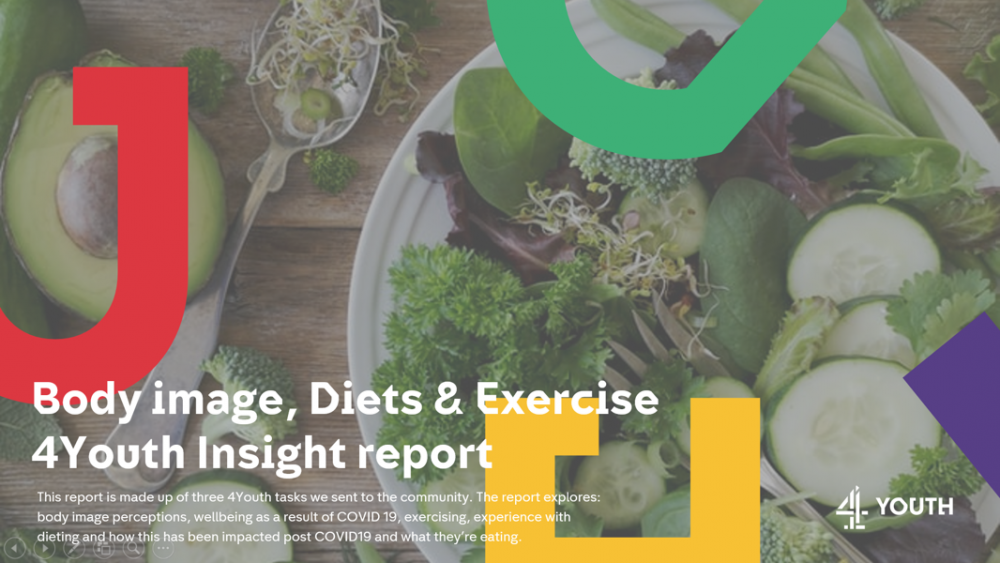 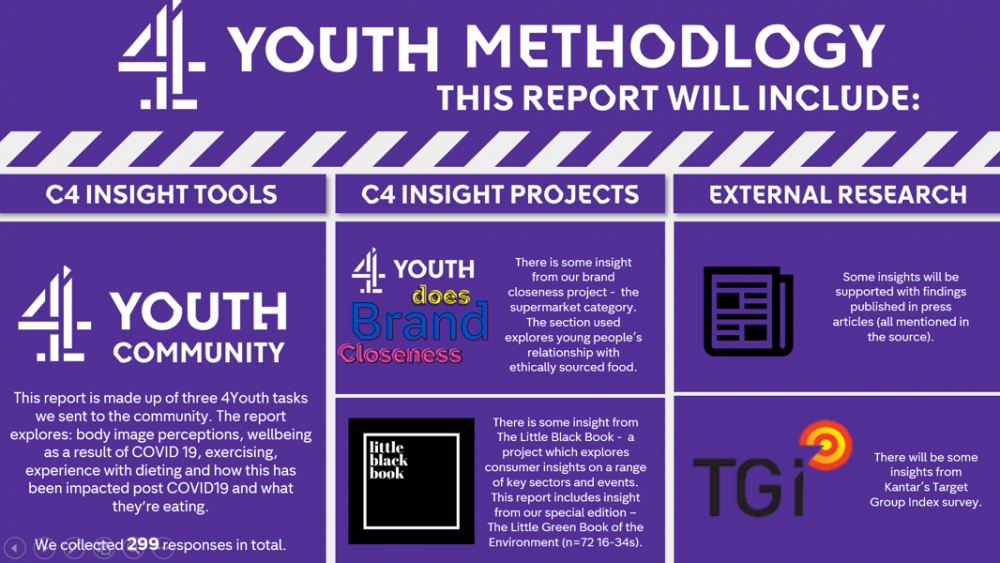 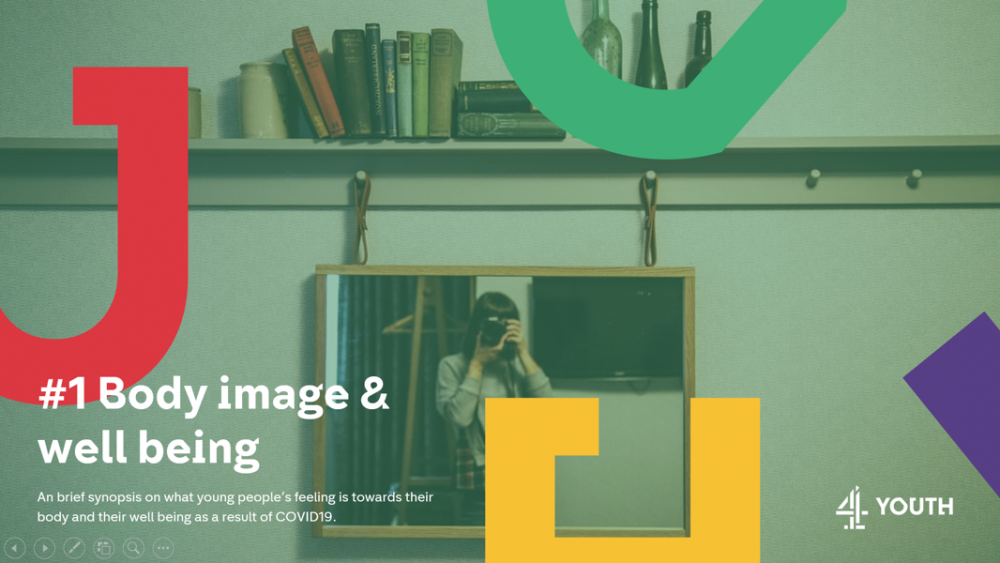 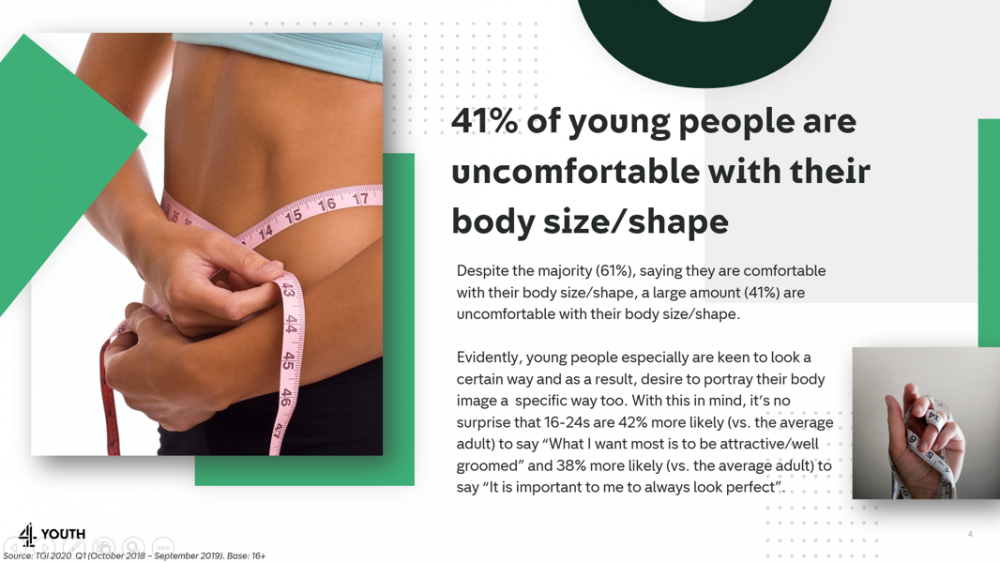 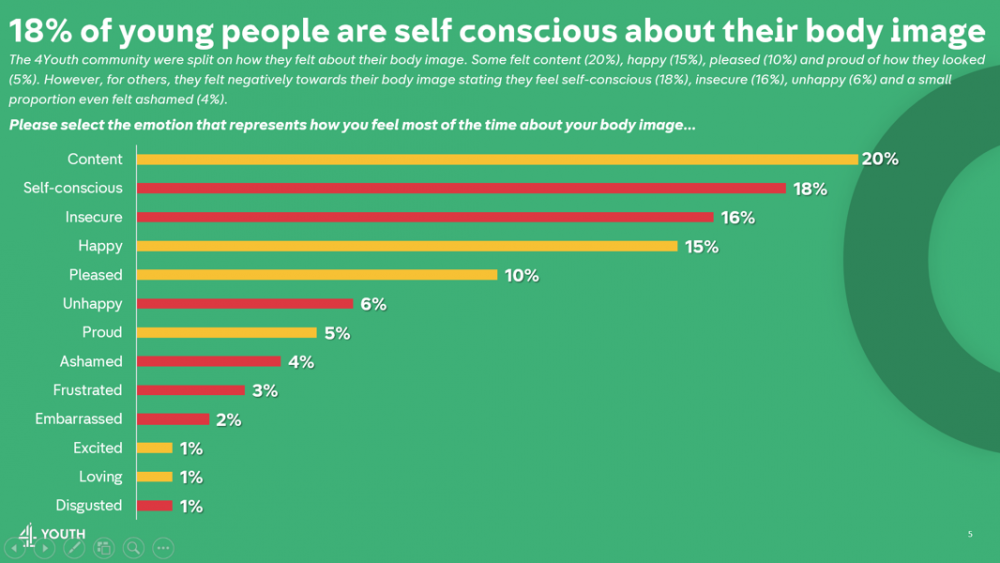 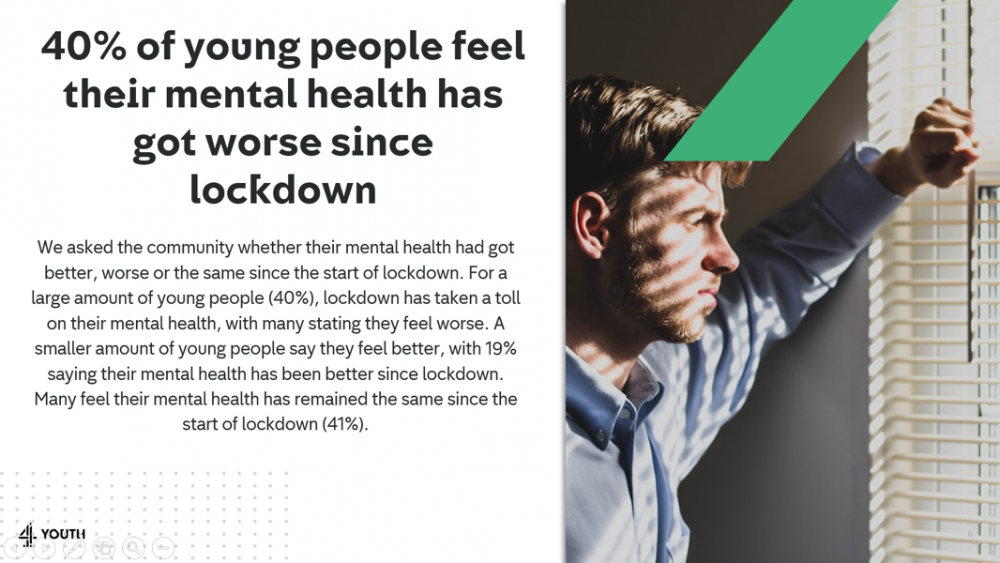 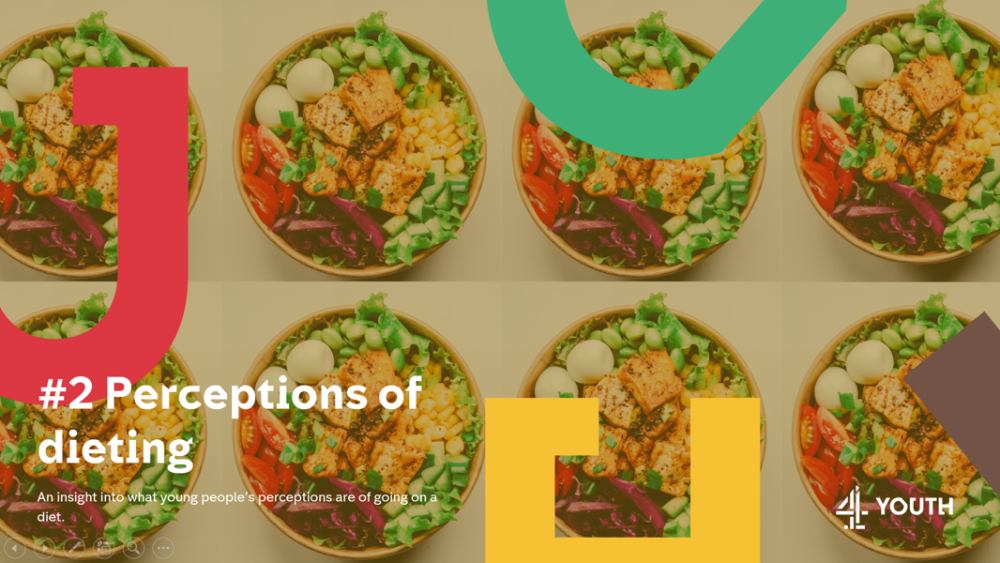 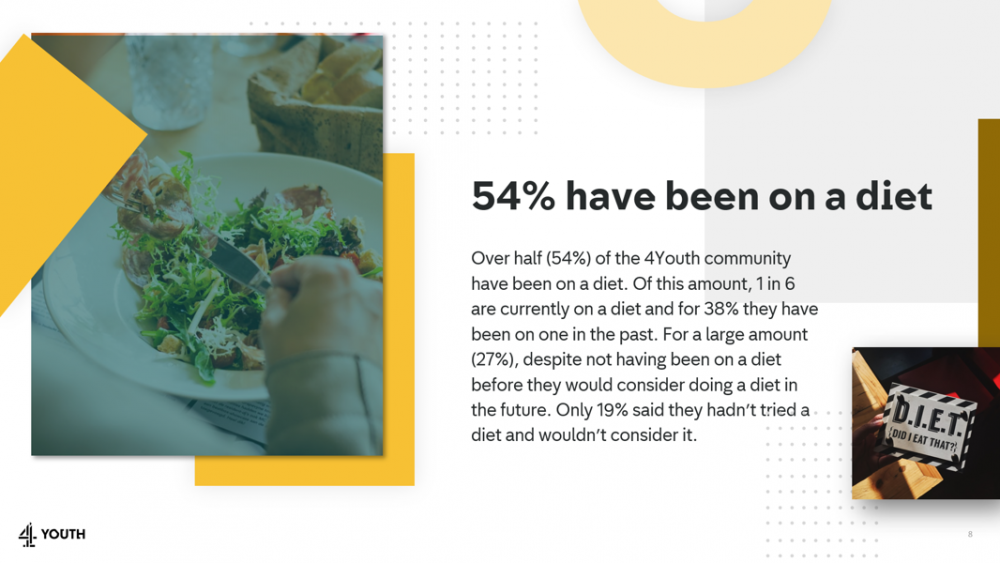 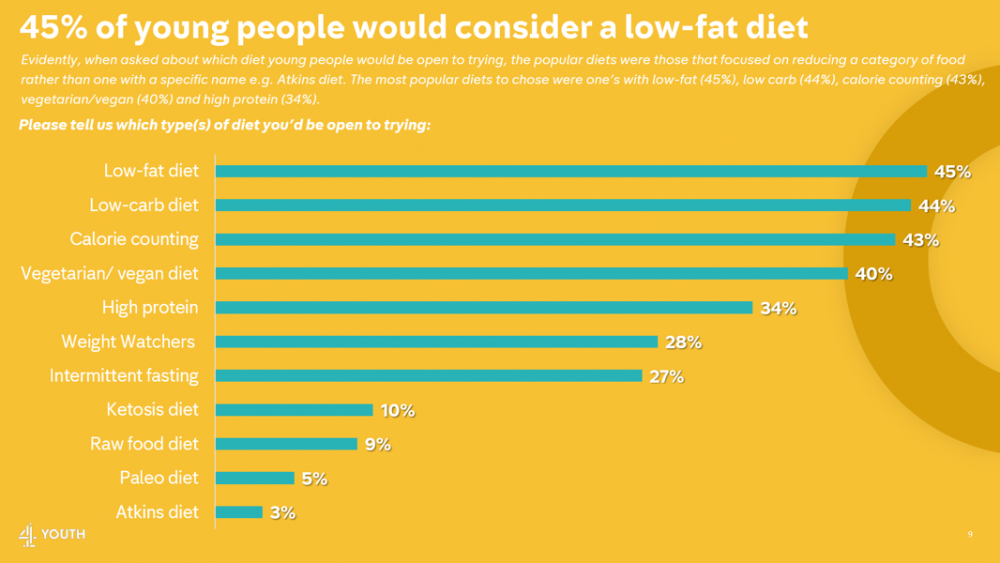 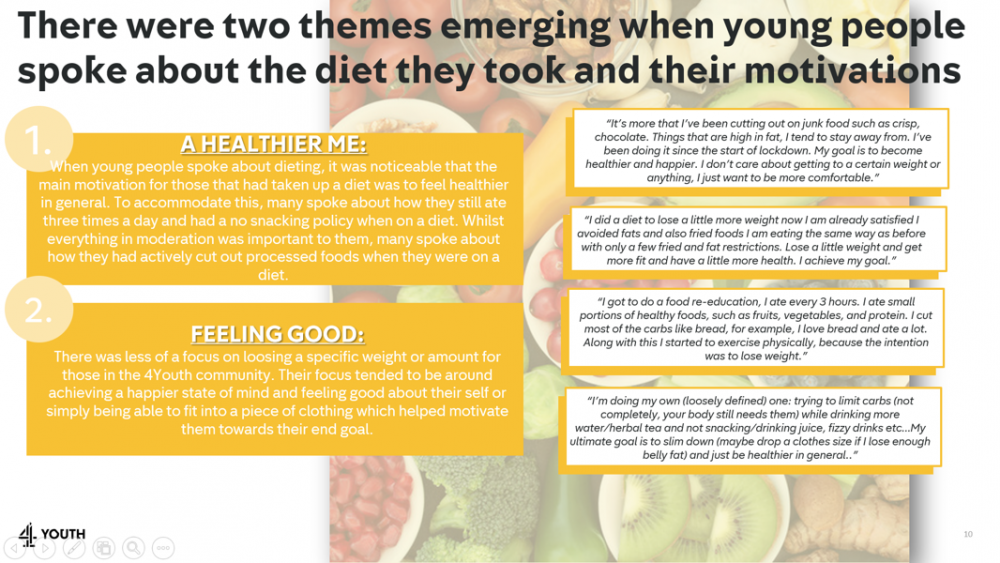 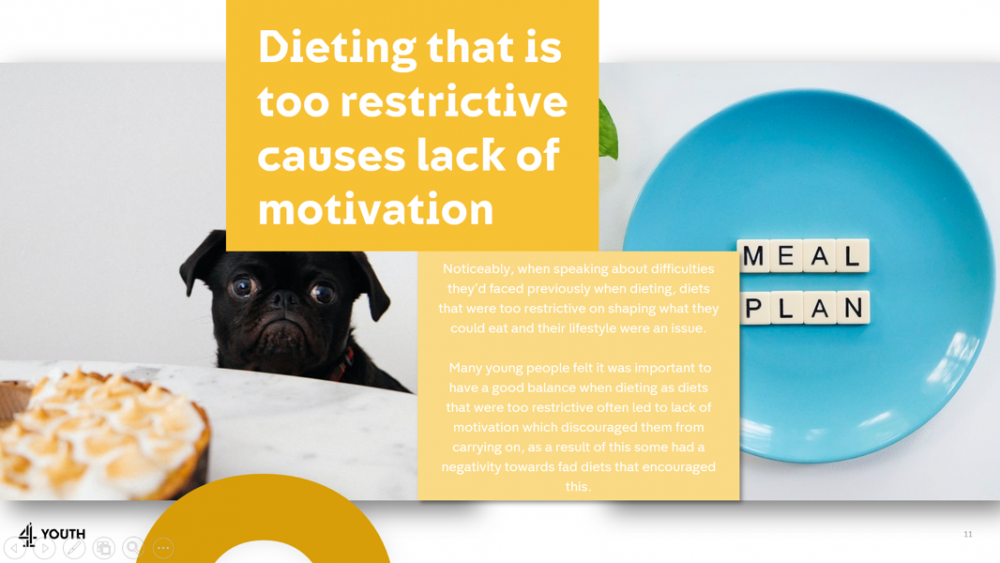 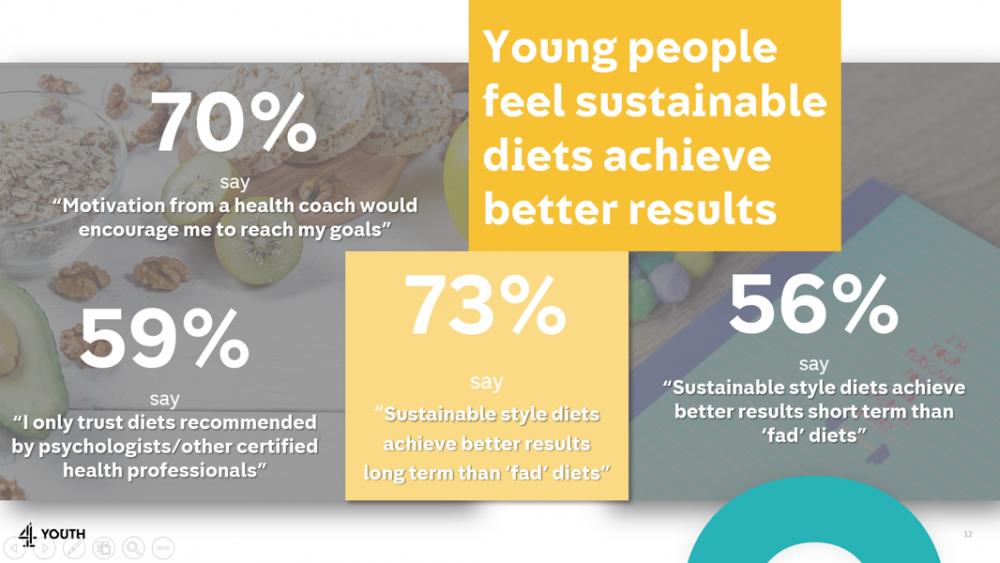 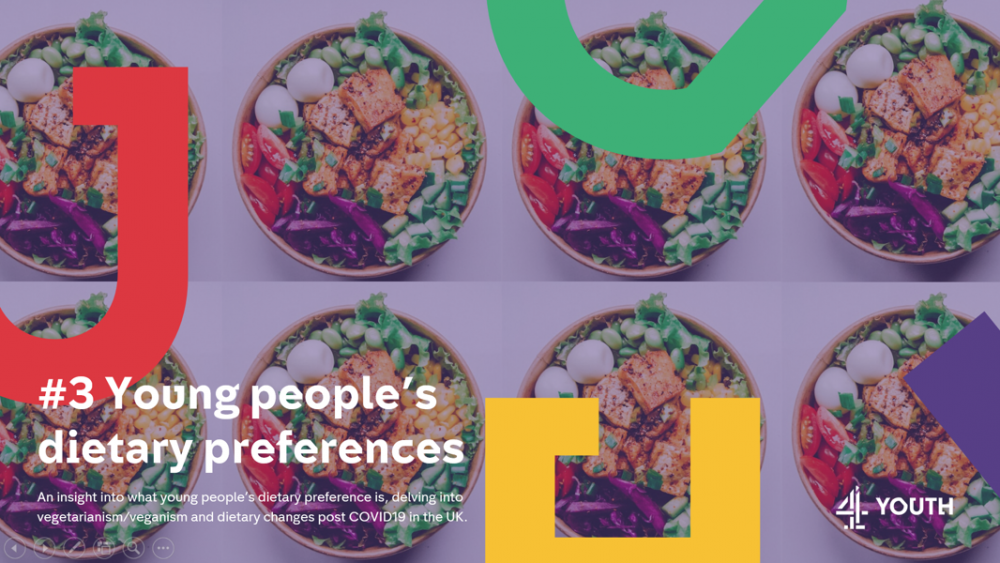 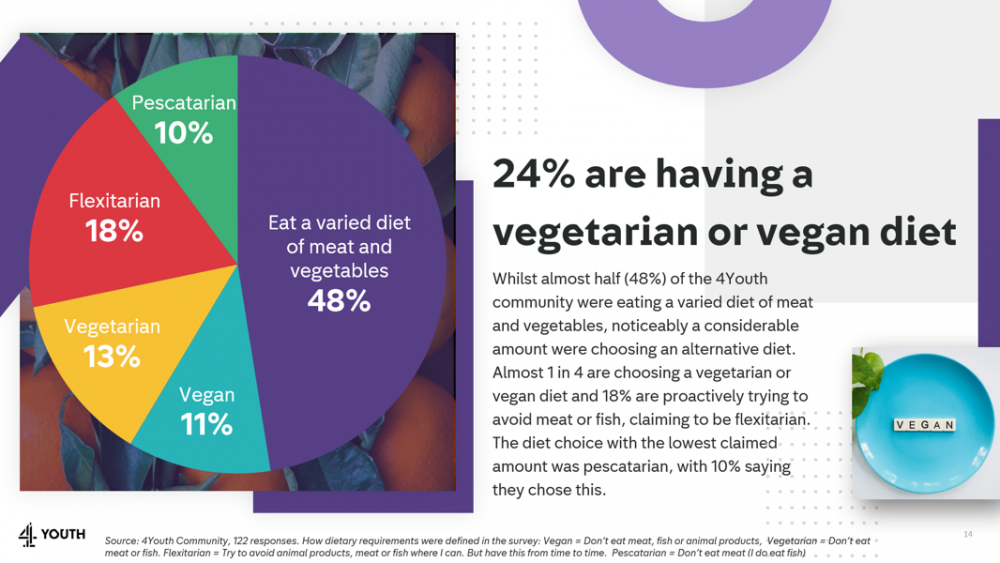 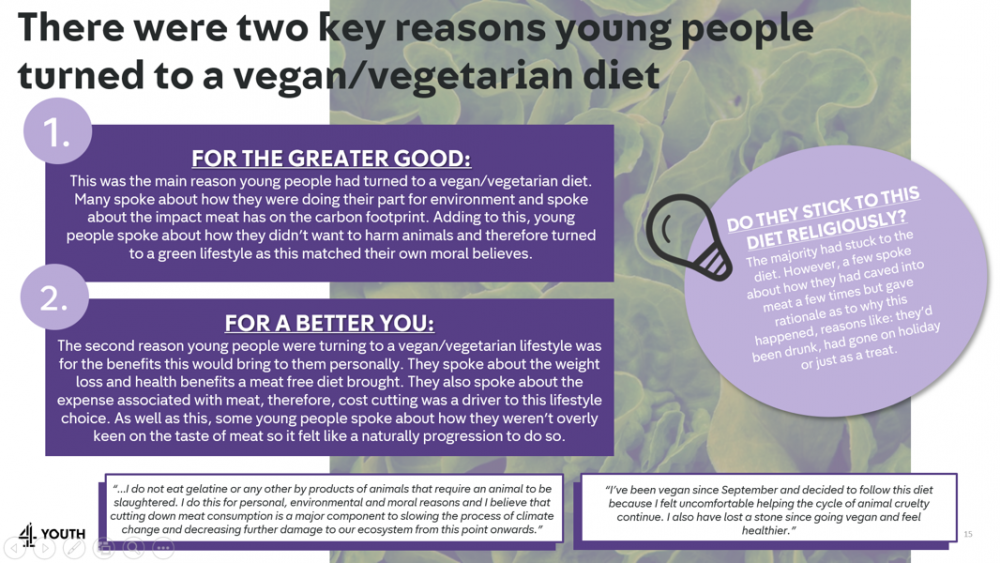 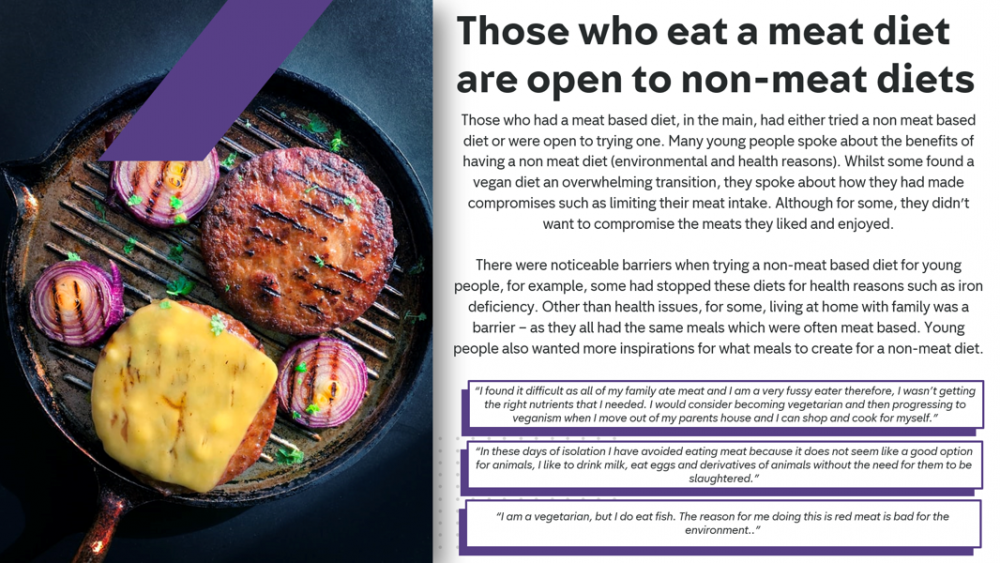 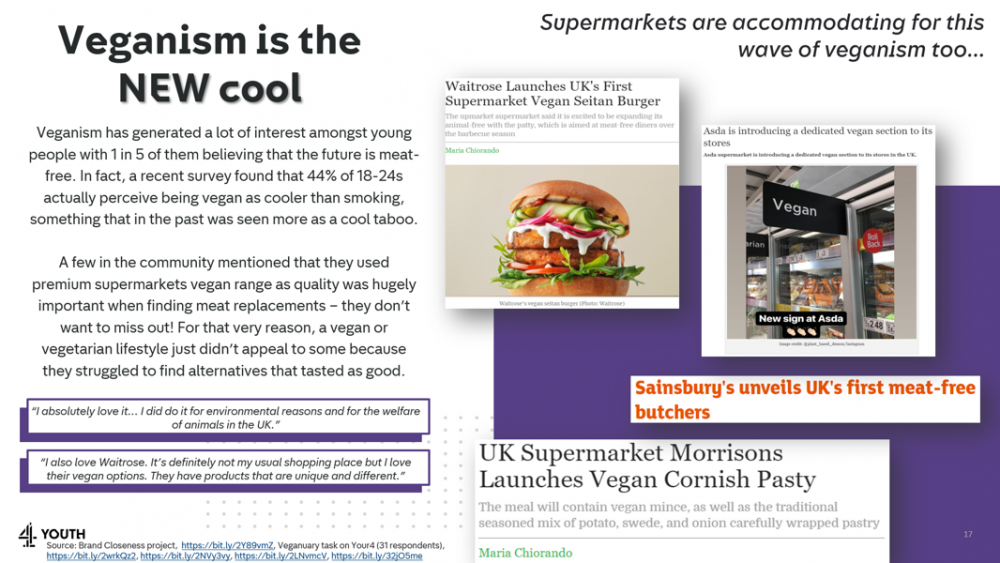 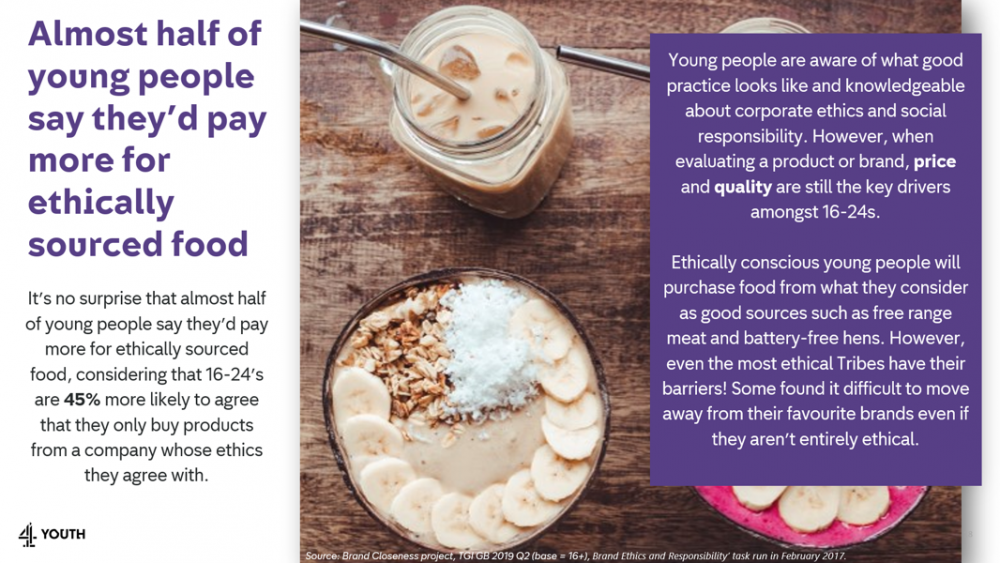 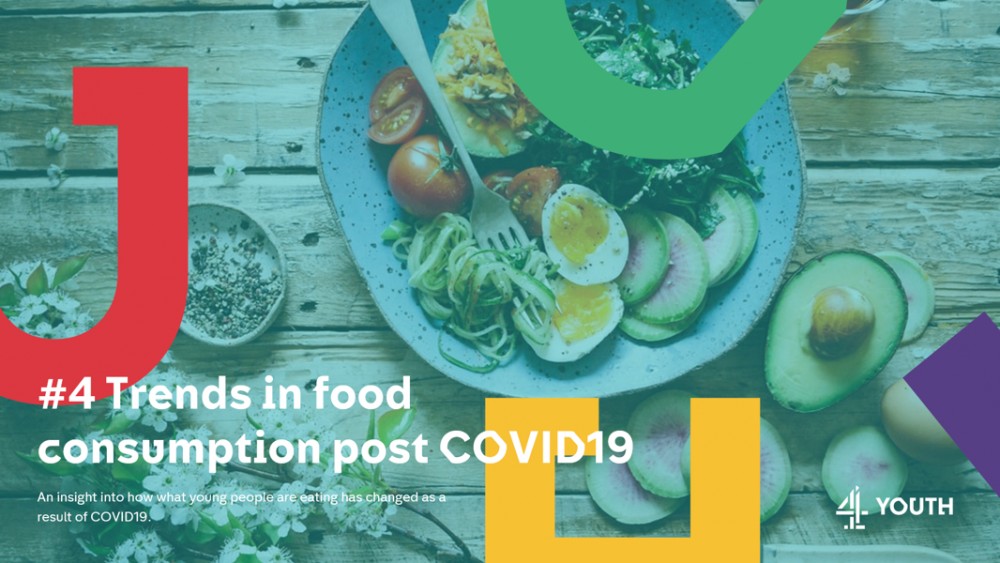 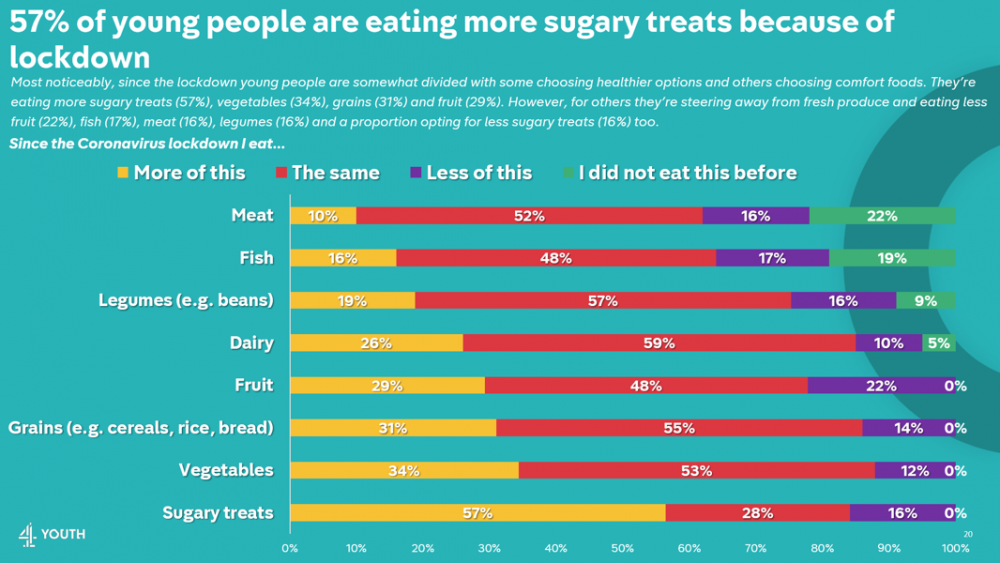 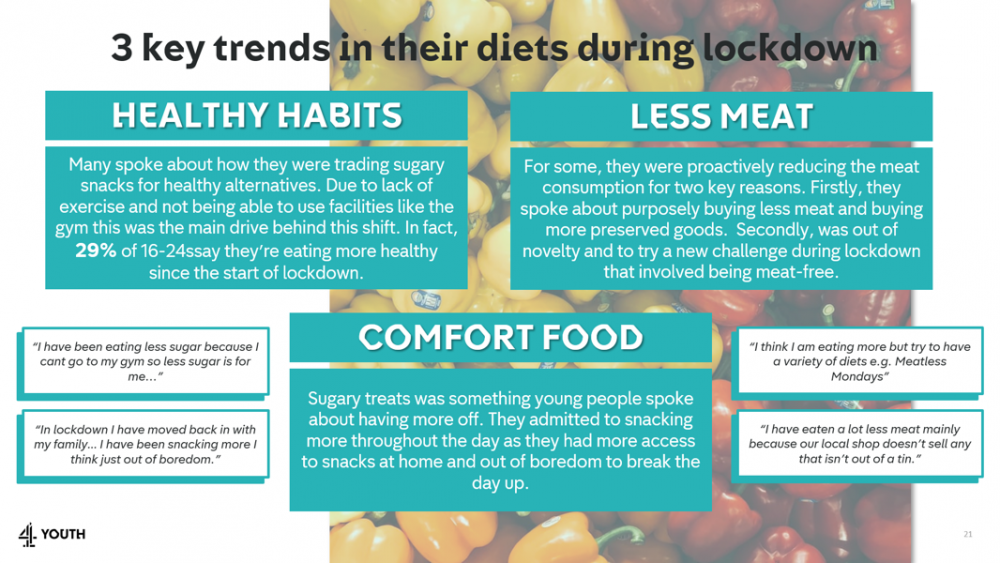 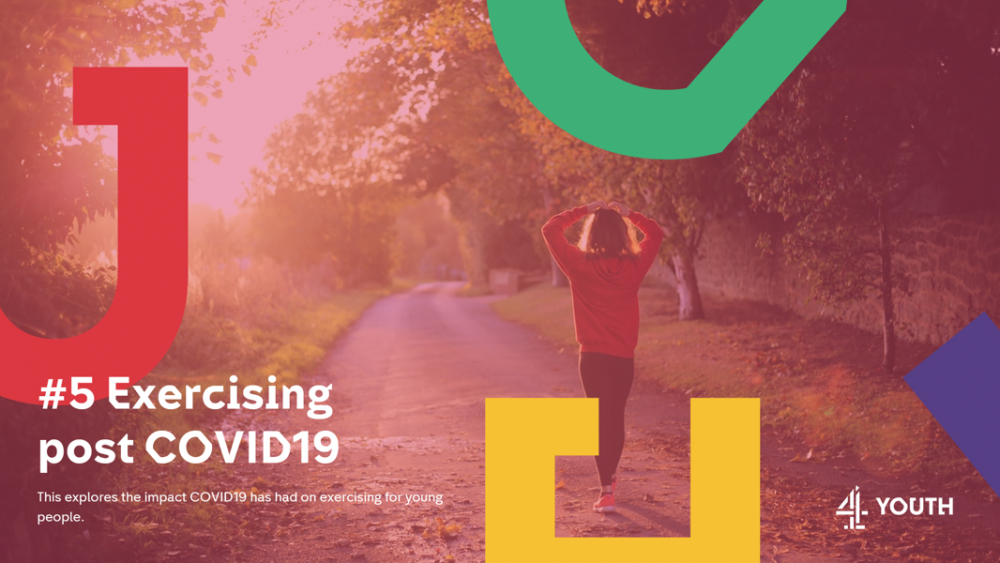 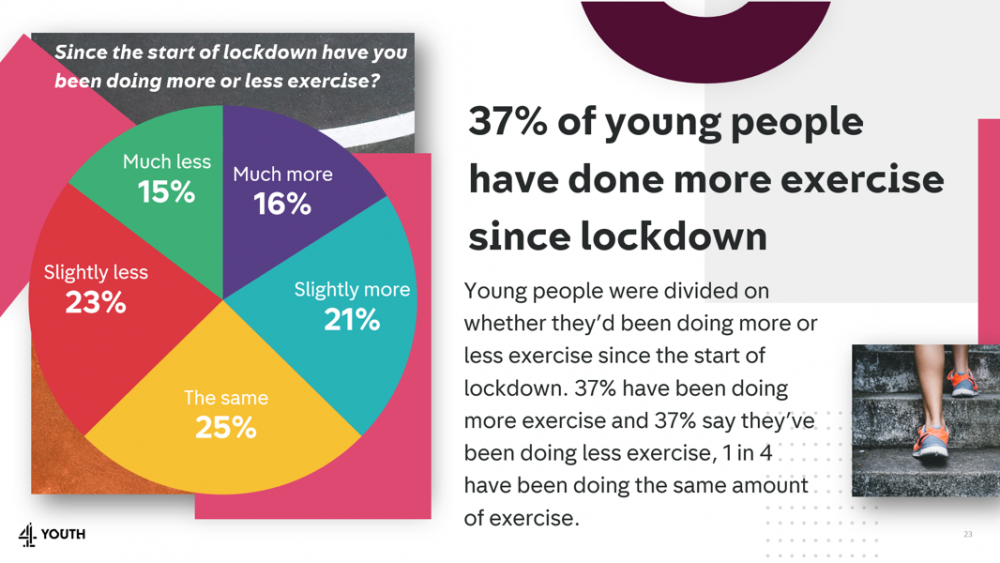 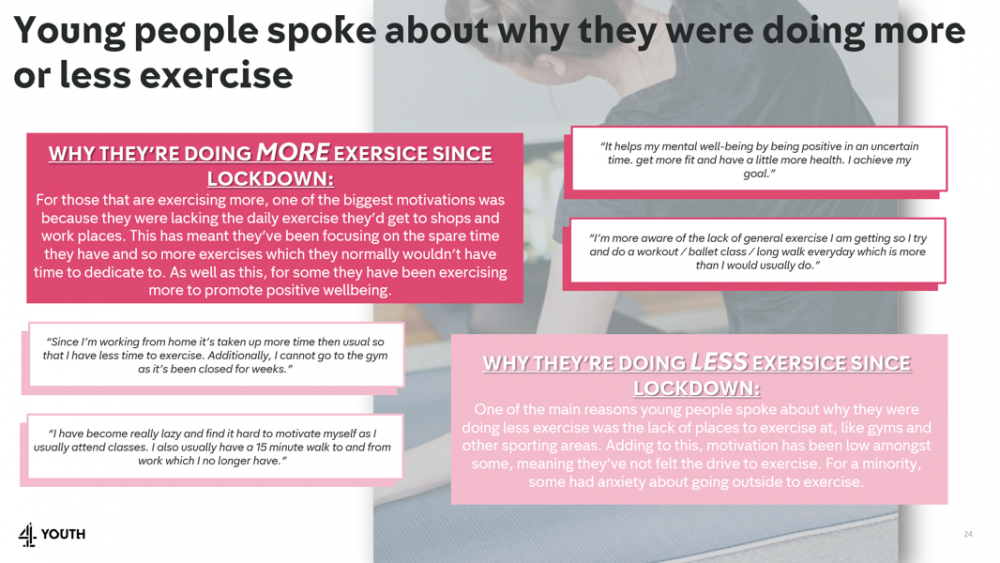 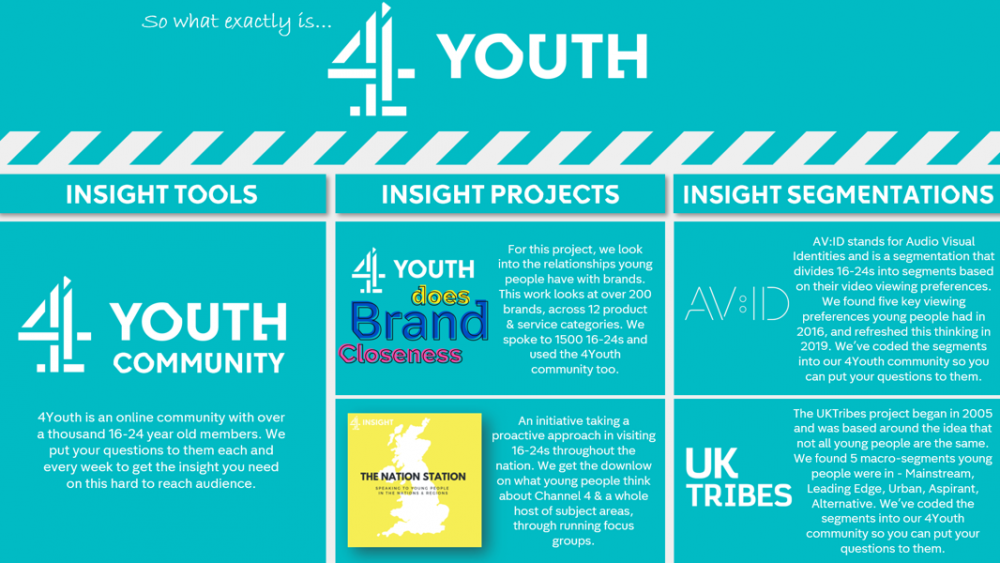 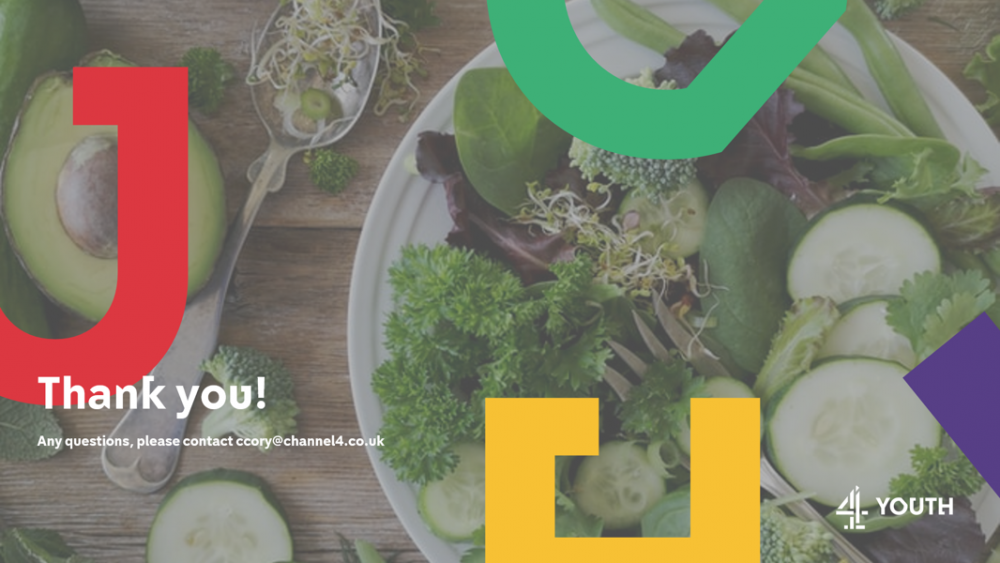 This report is made up of three 4Youth tasks we sent to the community. The report explores: body image perceptions, wellbeing as a result of COVID 19, exercising, experience with dieting and how this has been impacted post COVID19 and what they’re eating.

41% of young people are uncomfortable with their body size/shape

A HEALTHIER ME:
When young people spoke about dieting, it was noticeable that the main motivation for those that had taken up a diet was to feel healthier in general. To accommodate this, many spoke about how they still ate three times a day and had a no snacking policy when on a diet. Whilst everything in moderation was important to them, many spoke about how they had actively cut out processed foods when they were on a diet.

FEELING GOOD:
There was less of a focus on loosing a specific weight or amount for those in the 4Youth community. Their focus tended to be around achieving a happier state of mind and feeling good about their self or simply being able to fit into a piece of clothing which helped motivate them towards their end goal.

“It’s more that I’ve been cutting out on junk food such as crisp, chocolate. Things that are high in fat, I tend to stay away from. I’ve been doing it since the start of lockdown. My goal is to become healthier and happier. I don’t care about getting to a certain weight or anything, I just want to be more comfortable.”

“I did a diet to lose a little more weight now I am already satisfied I avoided fats and also fried foods I am eating the same way as before with only a few fried and fat restrictions. Lose a little weight and get more fit and have a little more health. I achieve my goal.”

“I got to do a food re-education, I ate every 3 hours. I ate small portions of healthy foods, such as fruits, vegetables, and protein. I cut most of the carbs like bread, for example, I love bread and ate a lot. Along with this I started to exercise physically, because the intention was to lose weight.”

“I’m doing my own (loosely defined) one: trying to limit carbs (not completely, your body still needs them) while drinking more water/herbal tea and not snacking/drinking juice, fizzy drinks etc…My ultimate goal is to slim down (maybe drop a clothes size if I lose enough belly fat) and just be healthier in general..”

Dieting that is too restrictive causes lack of motivation

Noticeably, when speaking about difficulties they’d faced previously when dieting, diets that were too restrictive on shaping what they could eat and their lifestyle were an issue.

Many young people felt it was important to have a good balance when dieting as diets that were too restrictive often led to lack of motivation which discouraged them from carrying on, as a result of this some had a negativity towards fad diets that encouraged this.

24% are having a vegetarian or vegan diet

Whilst almost half (48%) of the 4Youth community were eating a varied diet of meat and vegetables, noticeably a considerable amount were choosing an alternative diet. Almost 1 in 4 are choosing a vegetarian or vegan diet and 18% are proactively trying to avoid meat or fish, claiming to be flexitarian. The diet choice with the lowest claimed amount was pescatarian, with 10% saying they chose this.

FOR A BETTER YOU:
The second reason young people were turning to a vegan/vegetarian lifestyle was for the benefits this would bring to them personally. They spoke about the weight loss and health benefits a meat free diet brought. They also spoke about the expense associated with meat, therefore, cost cutting was a driver to this lifestyle choice. As well as this, some young people spoke about how they weren’t overly keen on the taste of meat so it felt like a naturally progression to do so.

DO THEY STICK TO THIS DIET RELIGIOUSLY?
The majority had stuck to the diet. However, a few spoke about how they had caved into meat a few times but gave rationale as to why this happened, reasons like: they’d been drunk, had gone on holiday or just as a treat.

“…I do not eat gelatine or any other by products of animals that require an animal to be slaughtered. I do this for personal, environmental and moral reasons and I believe that cutting down meat consumption is a major component to slowing the process of climate change and decreasing further damage to our ecosystem from this point onwards.”

“I’ve been vegan since September and decided to follow this diet because I felt uncomfortable helping the cycle of animal cruelty continue. I also have lost a stone since going vegan and feel healthier.”

Those who had a meat based diet, in the main, had either tried a non meat based diet or were open to trying one. Many young people spoke about the benefits of having a non meat diet (environmental and health reasons). Whilst some found a vegan diet an overwhelming transition, they spoke about how they had made compromises such as limiting their meat intake. Although for some, they didn’t want to compromise the meats they liked and enjoyed.

There were noticeable barriers when trying a non-meat based diet for young people, for example, some had stopped these diets for health reasons such as iron deficiency. Other than health issues, for some, living at home with family was a barrier – as they all had the same meals which were often meat based. Young people also wanted more inspirations for what meals to create for a non-meat diet.

“I found it difficult as all of my family ate meat and I am a very fussy eater therefore, I wasn’t getting the right nutrients that I needed. I would consider becoming vegetarian and then progressing to veganism when I move out of my parents house and I can shop and cook for myself.”

“In these days of isolation I have avoided eating meat because it does not seem like a good option for animals, I like to drink milk, eat eggs and derivatives of animals without the need for them to be slaughtered.”

“I am a vegetarian, but I do eat fish. The reason for me doing this is red meat is bad for the environment..”

Veganism is the NEW cool

Veganism has generated a lot of interest amongst young people with 1 in 5 of them believing that the future is meat-free. In fact, a recent survey found that 44% of 18-24s actually perceive being vegan as cooler than smoking, something that in the past was seen more as a cool taboo.

A few in the community mentioned that they used premium supermarkets vegan range as quality was hugely important when finding meat replacements – they don’t want to miss out! For that very reason, a vegan or vegetarian lifestyle just didn’t appeal to some because they struggled to find alternatives that tasted as good.

“I absolutely love it… I did do it for environmental reasons and for the welfare of animals in the UK.”

“I also love Waitrose. It’s definitely not my usual shopping place but I love their vegan options. They have products that are unique and different.”

It’s no surprise that almost half of young people say they’d pay more for ethically sourced food, considering that 16-24’s are 45% more likely to agree that they only buy products from a company whose ethics they agree with.

Young people are aware of what good practice looks like and knowledgeable about corporate ethics and social responsibility. However, when evaluating a product or brand, price and quality are still the key drivers amongst 16-24s.

Ethically conscious young people will purchase food from what they consider as good sources such as free range meat and battery-free hens. However, even the most ethical Tribes have their barriers! Some found it difficult to move away from their favourite brands even if they aren’t entirely ethical.

Most noticeably, since the lockdown young people are somewhat divided with some choosing healthier options and others choosing comfort foods. They’re eating more sugary treats (57%), vegetables (34%), grains (31%) and fruit (29%). However, for others they’re steering away from fresh produce and eating less fruit (22%), fish (17%), meat (16%), legumes (16%) and a proportion opting for less sugary treats (16%) too.

3 key trends in their diets during lockdown

Many spoke about how they were trading sugary snacks for healthy alternatives. Due to lack of exercise and not being able to use facilities like the gym this was the main drive behind this shift. In fact, 29% of 16-24ssay they’re eating more healthy since the start of lockdown.

For some, they were proactively reducing the meat consumption for two key reasons. Firstly, they spoke about purposely buying less meat and buying more preserved goods.  Secondly, was out of novelty and to try a new challenge during lockdown that involved being meat-free.

Sugary treats was something young people spoke about having more off. They admitted to snacking more throughout the day as they had more access to snacks at home and out of boredom to break the day up.

“In lockdown I have moved back in with my family… I have been snacking more I think just out of boredom.”

“I think I am eating more but try to have a variety of diets e.g. Meatless Mondays.”

“I have eaten a lot less meat mainly because our local shop doesn’t sell any that isn’t out of a tin.”

37% of young people have done more exercise since lockdown

WHY THEY’RE DOING MORE EXERSICE SINCE LOCKDOWN:
For those that are exercising more, one of the biggest motivations was because they were lacking the daily exercise they’d get to shops and work places. This has meant they’ve been focusing on the spare time they have and so more exercises which they normally wouldn’t have time to dedicate to. As well as this, for some they have been exercising more to promote positive wellbeing.

WHY THEY’RE DOING LESS EXERSICE SINCE LOCKDOWN:
One of the main reasons young people spoke about why they were doing less exercise was the lack of places to exercise at, like gyms and other sporting areas. Adding to this, motivation has been low amongst some, meaning they’ve not felt the drive to exercise. For a minority, some had anxiety about going outside to exercise.

“Since I’m working from home it’s taken up more time then usual so that I have less time to exercise. Additionally, I cannot go to the gym as it’s been closed for weeks.”

“I have become really lazy and find it hard to motivate myself as I usually attend classes. I also usually have a 15 minute walk to and from work which I no longer have.”

“It helps my mental well-being by being positive in an uncertain time. get more fit and have a little more health. I achieve my goal.”

“I’m more aware of the lack of general exercise I am getting so I try and do a workout / ballet class / long walk everyday which is more than I would usually do.”

For this study on mental health we ran three tasks over the course of a few weeks. The first task looked at Tribes and t... Read more about Mental Health

We spoke to 74 members of our 16-24 year old community about energy drinks, and found that just over half (52%) are cons... Read more about Young People & Energy Drinks