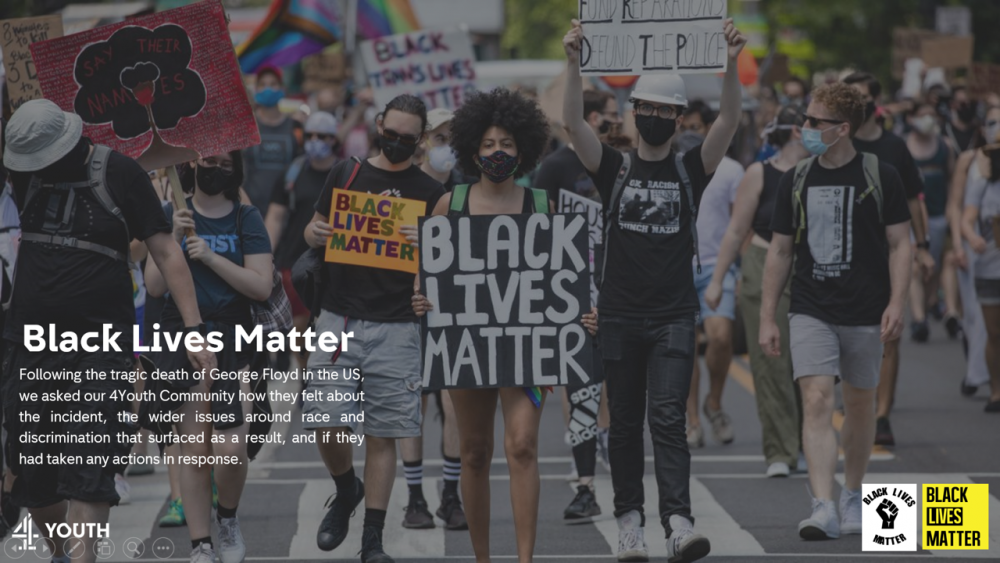 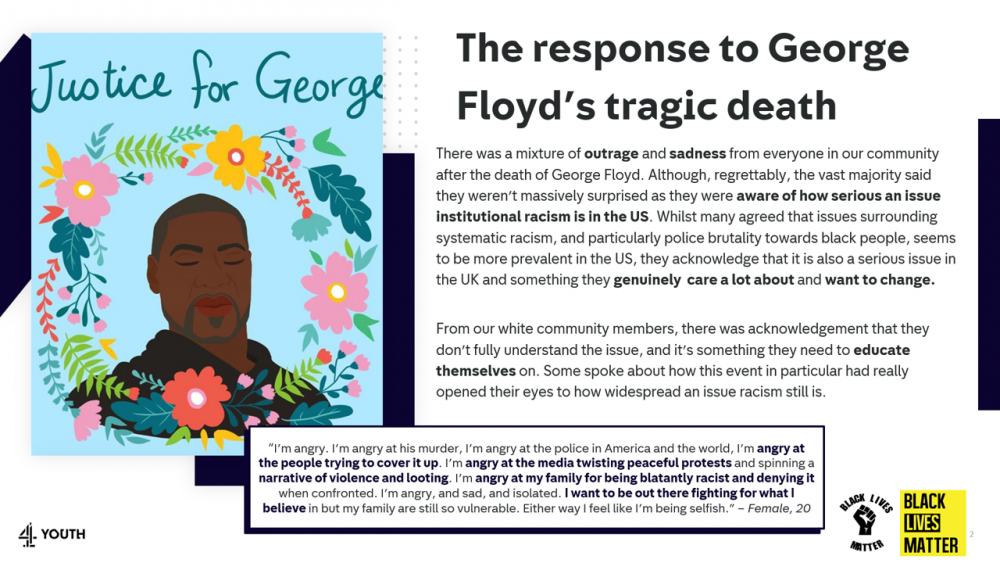 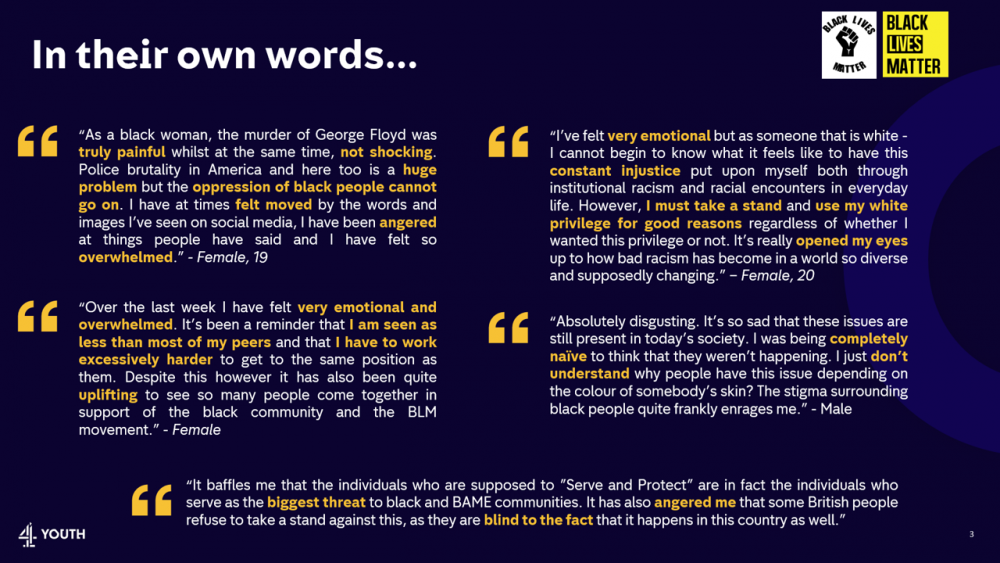 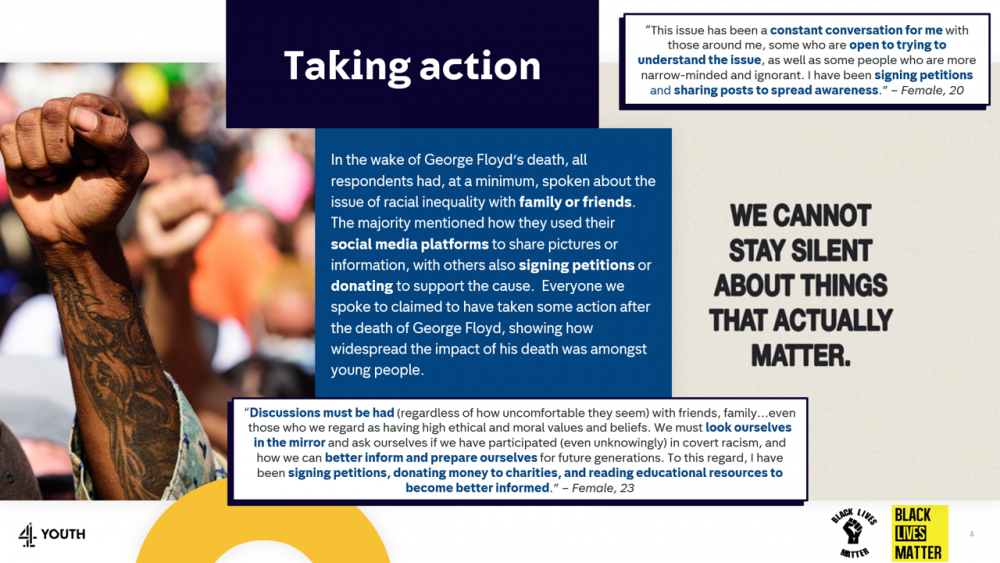 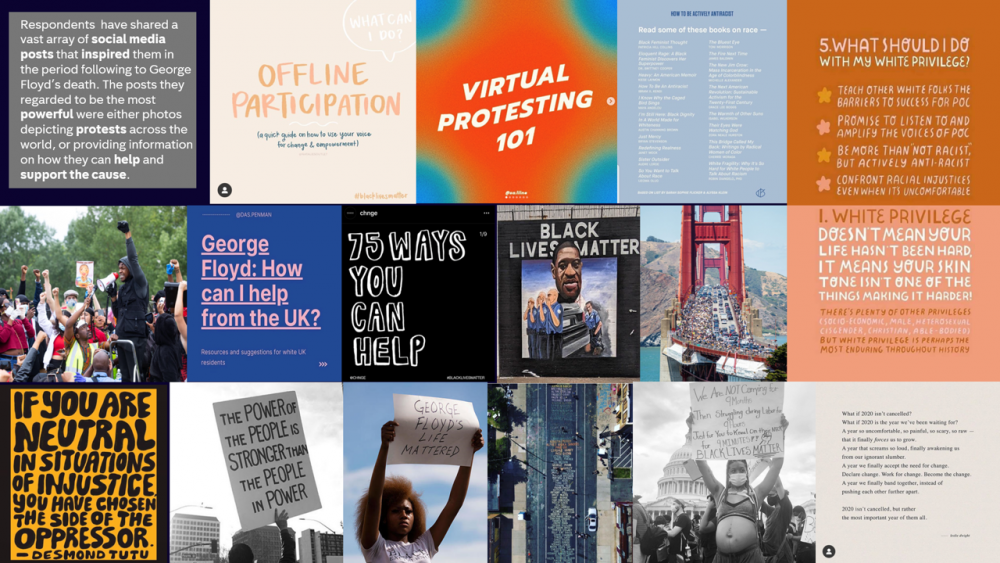 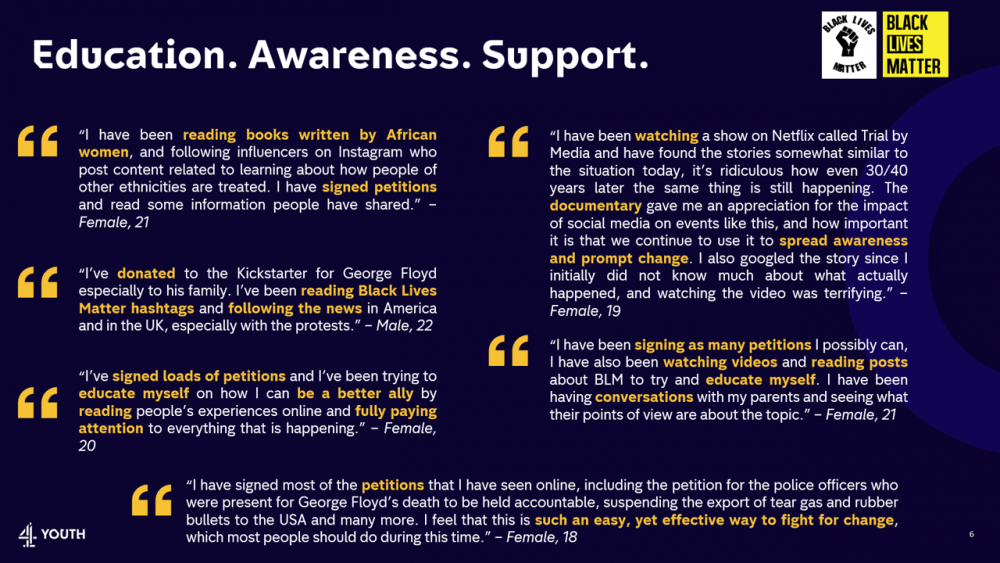 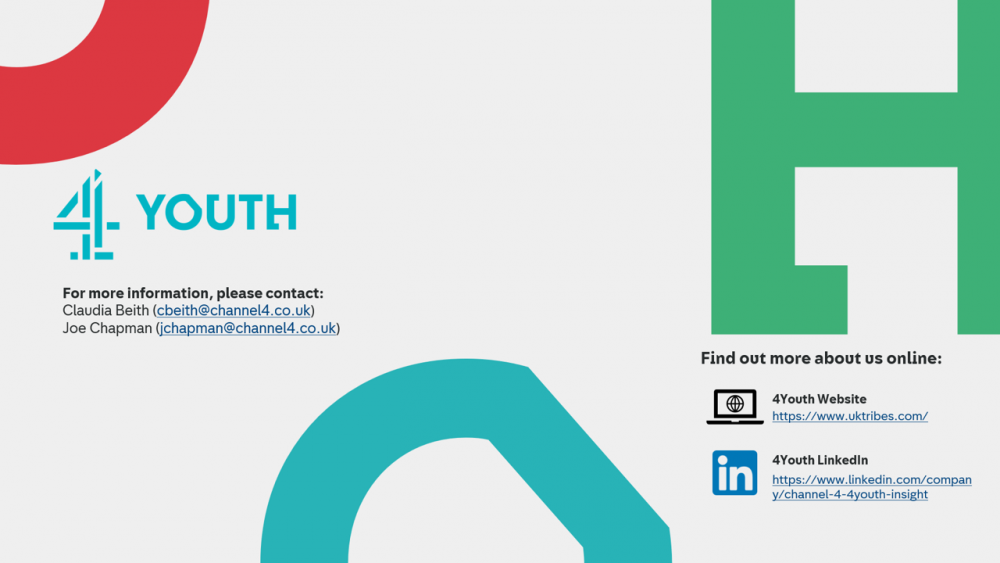 Following the tragic death of George Floyd in the US, we asked our 4Youth Community how they felt about the incident, the wider issues around race and discrimination that surfaced as a result, and if they had taken any actions in response.

There was a mixture of outrage and sadness from everyone in our community after the death of George Floyd. Although, regrettably, the vast majority said they weren’t massively surprised as they were aware of how serious an issue institutional racism is in the US. Whilst many agreed that issues surrounding systematic racism, and particularly police brutality towards black people, seems to be more prevalent in the US, they acknowledge that it is also a serious issue in the UK and something they genuinely  care a lot about and want to change.

From our white community members, there was acknowledgement that they don’t fully understand the issue, and it’s something they need to educate themselves on. Some spoke about how this event in particular had really opened their eyes to how widespread an issue racism still is.

“As a black woman, the murder of George Floyd was truly painful whilst at the same time, not shocking. Police brutality in America and here too is a huge problem but the oppression of black people cannot go on. I have at times felt moved by the words and images I’ve seen on social media, I have been angered at things people have said and I have felt so overwhelmed.” – Female, 19

“Over the last week I have felt very emotional and overwhelmed. It’s been a reminder that I am seen as less than most of my peers and that I have to work excessively harder to get to the same position as them. Despite this however it has also been quite uplifting to see so many people come together in support of the black community and the BLM movement.” – Female

“I’ve felt very emotional but as someone that is white – I cannot begin to know what it feels like to have this constant injustice put upon myself both through institutional racism and racial encounters in everyday life. However, I must take a stand and use my white privilege for good reasons regardless of whether I wanted this privilege or not. It’s really opened my eyes up to how bad racism has become in a world so diverse and supposedly changing.” – Female, 20

“Absolutely disgusting. It’s so sad that these issues are still present in today’s society. I was being completely naïve to think that they weren’t happening. I just don’t understand why people have this issue depending on the colour of somebody’s skin? The stigma surrounding black people quite frankly enrages me.” – Male

“It baffles me that the individuals who are supposed to “Serve and Protect” are in fact the individuals who serve as the biggest threat to black and BAME communities. It has also angered me that some British people refuse to take a stand against this, as they are blind to the fact that it happens in this country as well.”

In the wake of George Floyd’s death, all respondents had, at a minimum, spoken about the issue of racial inequality with family or friends. The majority mentioned how they used their social media platforms to share pictures or information, with others also signing petitions or donating to support the cause.  Everyone we spoke to claimed to have taken some action after the death of George Floyd, showing how widespread the impact of his death was amongst young people.

“Discussions must be had (regardless of how uncomfortable they seem) with friends, family…even those who we regard as having high ethical and moral values and beliefs. We must look ourselves in the mirror and ask ourselves if we have participated (even unknowingly) in covert racism, and how we can better inform and prepare ourselves for future generations. To this regard, I have been signing petitions, donating money to charities, and reading educational resources to become better informed.” – Female, 23

Respondents  have shared a vast array of social media posts that inspired them in the period following to George Floyd’s death. The posts they regarded to be the most powerful were either photos depicting protests across the world, or providing information on how they can help and support the cause.

“I have been reading books written by African women, and following influencers on Instagram who post content related to learning about how people of other ethnicities are treated. I have signed petitions and read some information people have shared.” – Female, 21

“I’ve donated to the Kickstarter for George Floyd especially to his family. I’ve been reading Black Lives Matter hashtags and following the news in America and in the UK, especially with the protests.” – Male, 22

“I’ve signed loads of petitions and I’ve been trying to educate myself on how I can be a better ally by reading people’s experiences online and fully paying attention to everything that is happening.” – Female, 20

“I have been watching a show on Netflix called Trial by Media and have found the stories somewhat similar to the situation today, it’s ridiculous how even 30/40 years later the same thing is still happening. The documentary gave me an appreciation for the impact of social media on events like this, and how important it is that we continue to use it to spread awareness and prompt change. I also googled the story since I initially did not know much about what actually happened, and watching the video was terrifying.” – Female, 19

“I have been signing as many petitions I possibly can, I have also been watching videos and reading posts about BLM to try and educate myself. I have been having conversations with my parents and seeing what their points of view are about the topic.” – Female, 21

“I have signed most of the petitions that I have seen online, including the petition for the police officers who were present for George Floyd’s death to be held accountable, suspending the export of tear gas and rubber bullets to the USA and many more. I feel that this is such an easy, yet effective way to fight for change, which most people should do during this time.” – Female, 18

As we draw closer to the start of the academic year, we decided to speak to our community of 16-24s about their attitude... Read more about Young People and Higher Education