Back to School: The Youth Mood 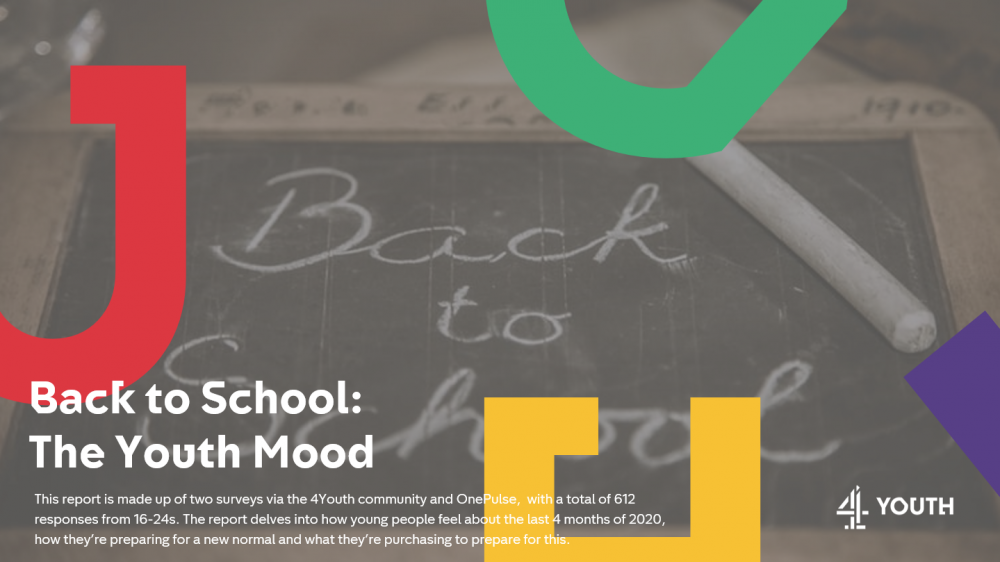 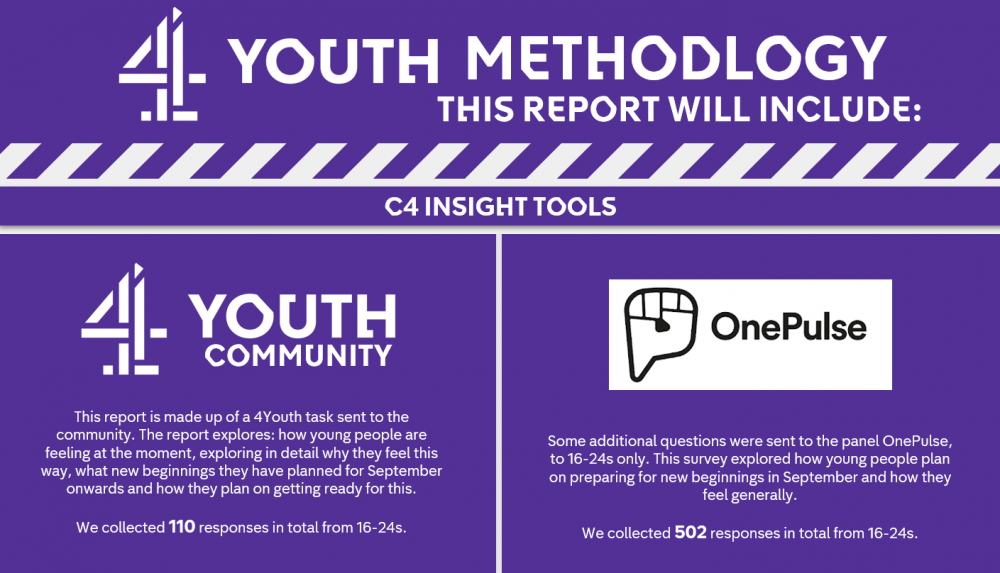 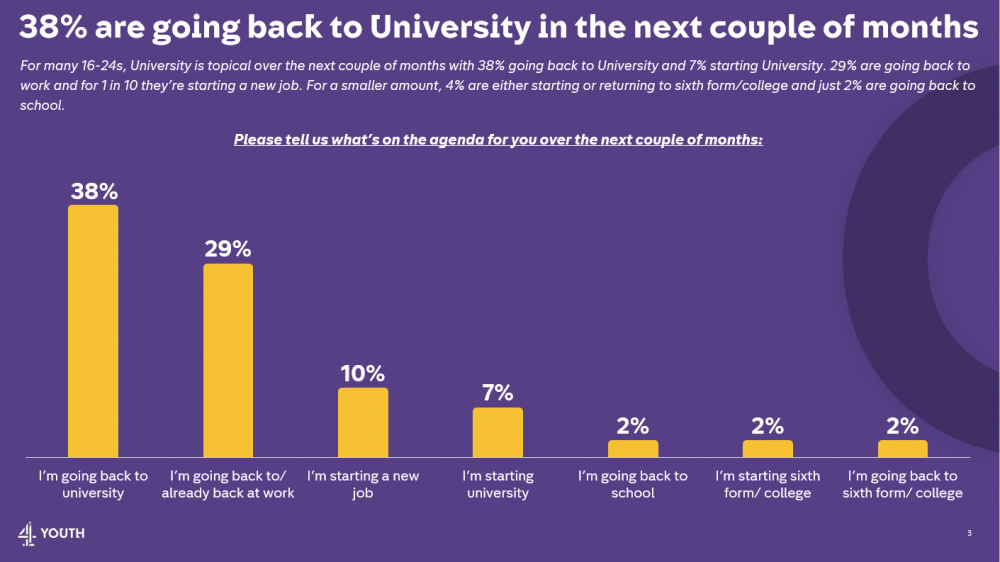 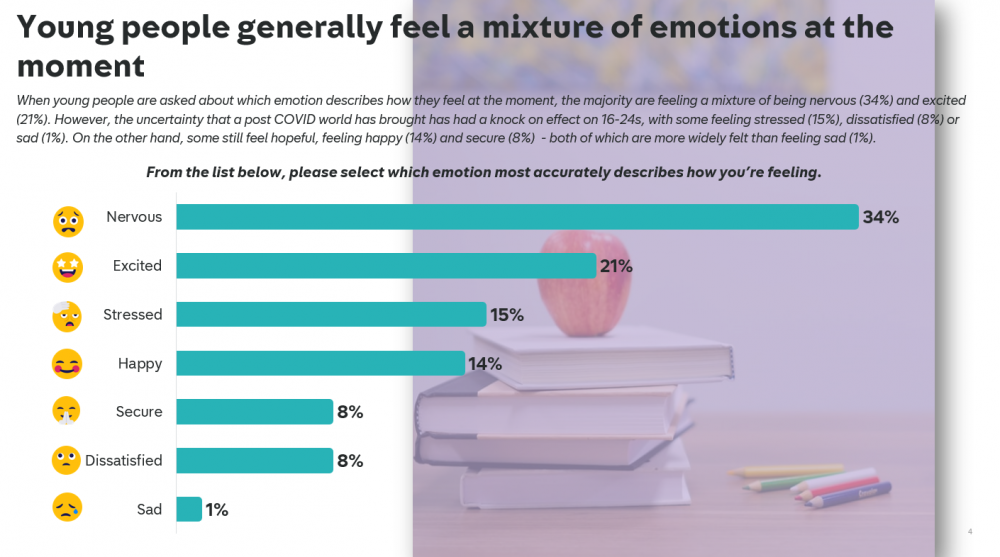 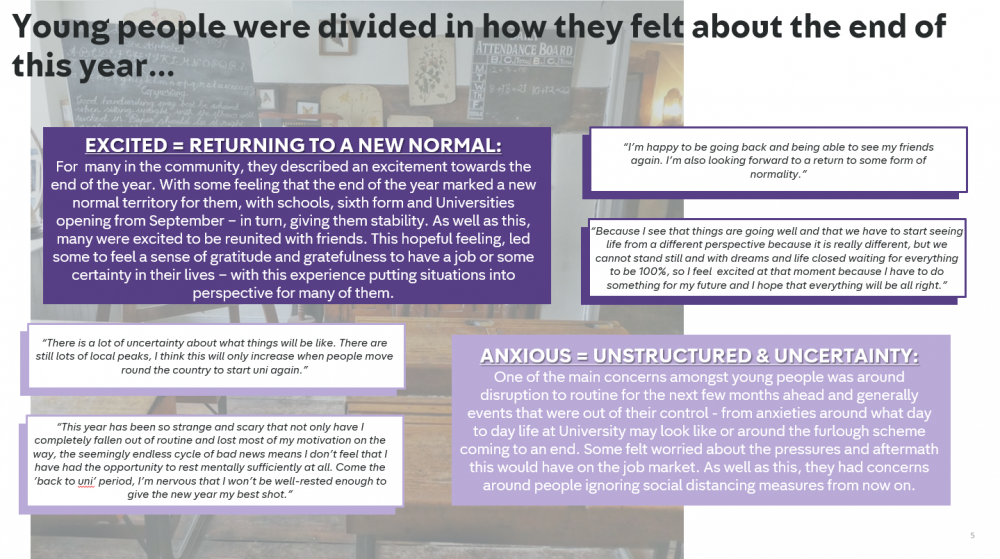 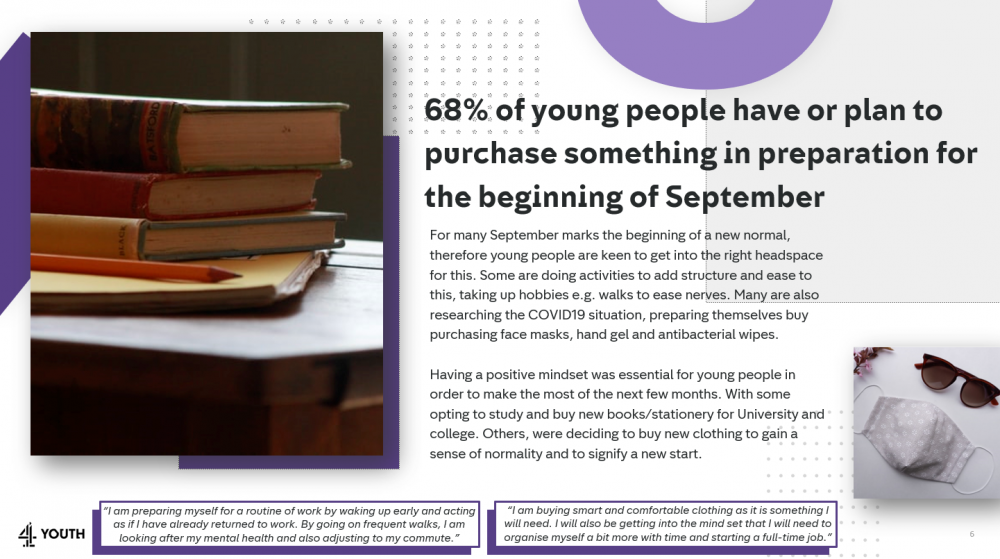 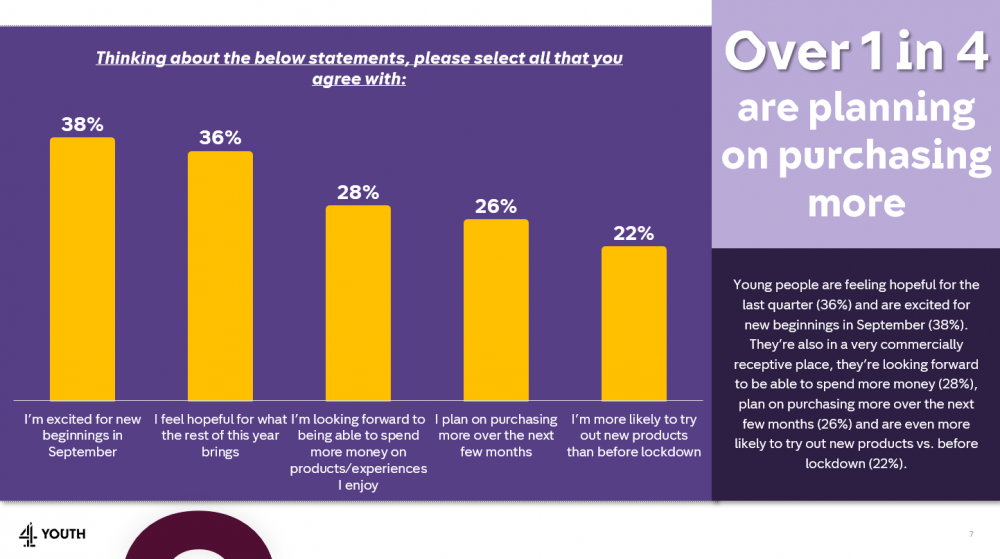 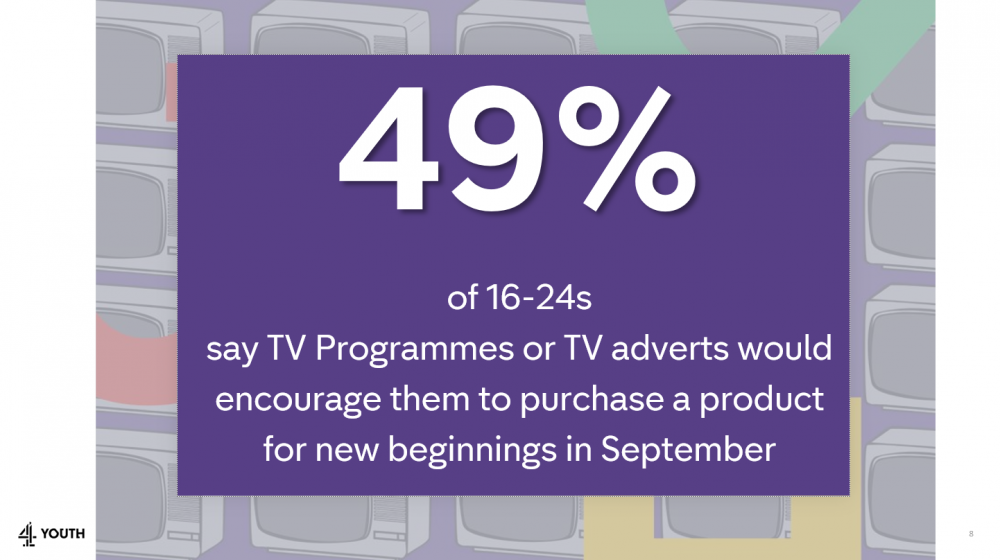 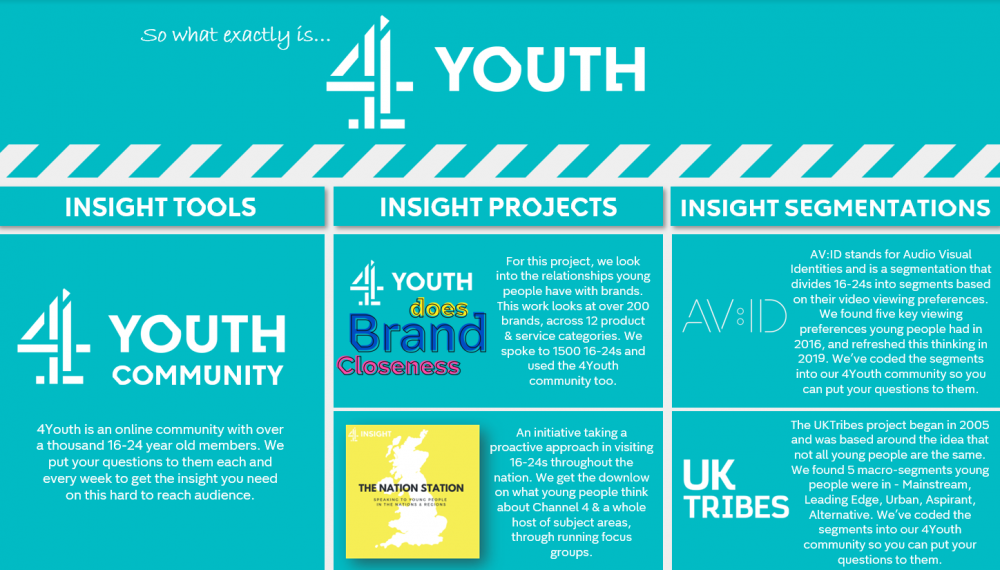 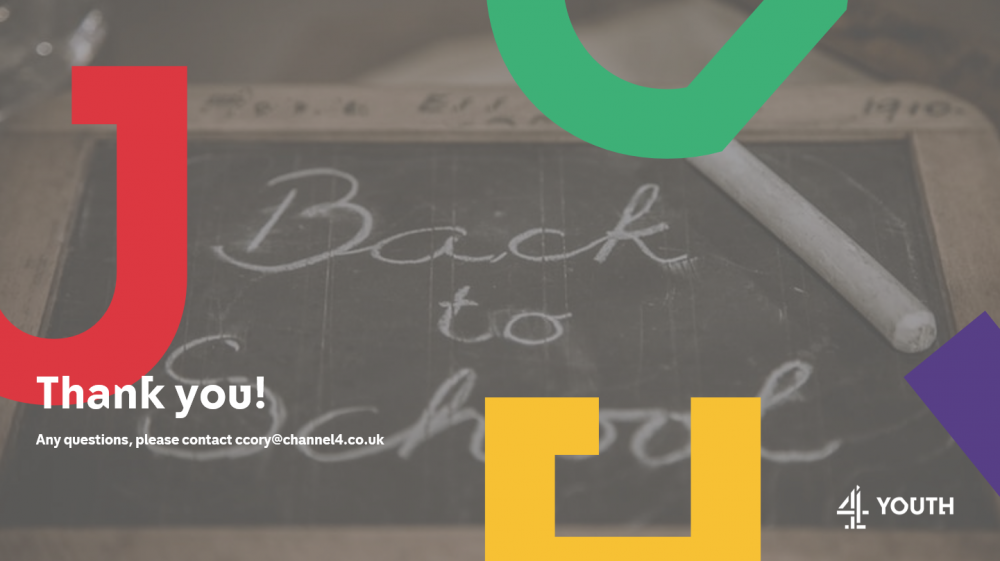 Back to School: The Youth Mood

This report is made up of two surveys via the 4Youth community and OnePulse,  with a total of 612 responses from 16-24s. The report delves into how young people feel about the last 4 months of 2020, how they’re preparing for a new normal and what they’re purchasing to prepare for this.

Young people generally feel a mixture of emotions at the moment

When young people are asked about which emotion describes how they feel at the moment, the majority are feeling a mixture of being nervous (34%) and excited (21%). However, the uncertainty that a post COVID world has brought has had a knock on effect on 16-24s, with some feeling stressed (15%), dissatisfied (8%) or sad (1%). On the other hand, some still feel hopeful, feeling happy (14%) and secure (8%)  – both of which are more widely felt than feeling sad (1%).

EXCITED = RETURNING TO A NEW NORMAL:

For many in the community, they described an excitement towards the end of the year. With some feeling that the end of the year marked a new normal territory for them, with schools, sixth form and Universities opening from September – in turn, giving them stability. As well as this, many were excited to be reunited with friends. This hopeful feeling, led some to feel a sense of gratitude and gratefulness to have a job or some certainty in their lives – with this experience putting situations into perspective for many of them.

One of the main concerns amongst young people was around disruption to routine for the next few months ahead and generally events that were out of their control – from anxieties around what day to day life at University may look like or around the furlough scheme coming to an end. Some felt worried about the pressures and aftermath this would have on the job market. As well as this, they had concerns around people ignoring social distancing measures from now on.

I’m happy to be going back and being able to see my friends again. I’m also looking forward to a return to some form of normality.”

“This year has been so strange and scary that not only have I completely fallen out of routine and lost most of my motivation on the way, the seemingly endless cycle of bad news means I don’t feel that I have had the opportunity to rest mentally sufficiently at all. Come the ‘back to uni‘ period, I’m nervous that I won’t be well-rested enough to give the new year my best shot.”

For many September marks the beginning of a new normal, therefore young people are keen to get into the right headspace for this. Some are doing activities to add structure and ease to this, taking up hobbies e.g. walks to ease nerves. Many are also researching the COVID19 situation, preparing themselves buy purchasing face masks, hand gel and antibacterial wipes.

Having a positive mindset was essential for young people in order to make the most of the next few months. With some opting to study and buy new books/stationery for University and college. Others, were deciding to buy new clothing to gain a sense of normality and to signify a new start.

I am preparing myself for a routine of work by waking up early and acting as if I have already returned to work. By going on frequent walks, I am looking after my mental health and also adjusting to my commute.”

“I am buying smart and comfortable clothing as it is something I will need. I will also be getting into the mind set that I will need to organise myself a bit more with time and starting a full-time job.”

Over 1 in 4 are planning on purchasing more

Young people are feeling hopeful for the last quarter (36%) and are excited for new beginnings in September (38%). They’re also in a very commercially receptive place, they’re looking forward to be able to spend more money (28%), plan on purchasing more over the next few months (26%) and are even more likely to try out new products vs. before lockdown (22%).

As we draw closer to the start of the academic year, we decided to speak to our community of 16-24s about their attitude... Read more about Young People and Higher Education
Your Browser is Outdated!
To experience this and other websites the way they're meant to be experienced, we recommend you update your browser.
Learn More and Update Your Browser