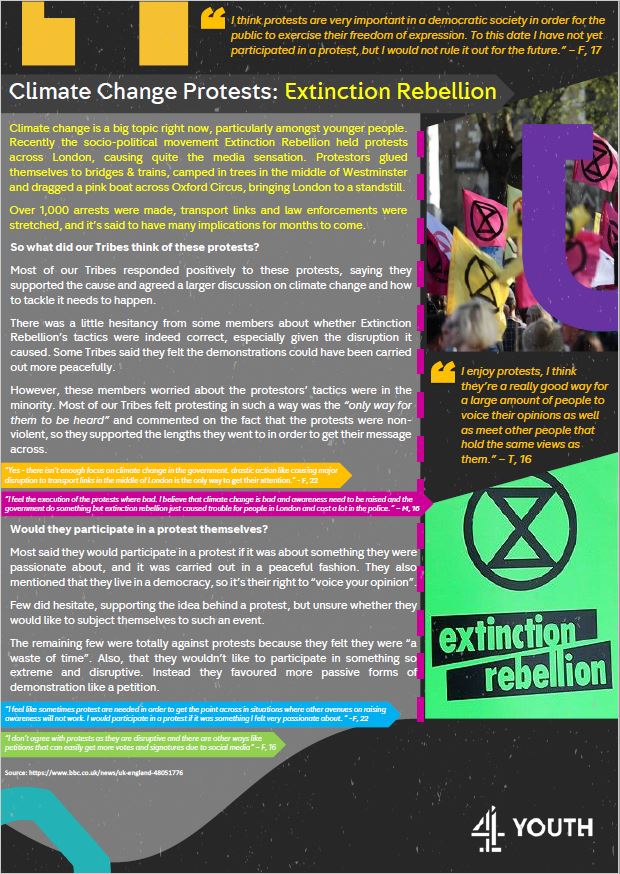 Climate change is a big topic right now, particularly amongst younger people. Recently the socio-political movement Extinction Rebellion held protests across London, causing quite the media sensation. Protestors glued themselves to bridges & trains, camped in trees in the middle of Westminster and dragged a pink boat across Oxford Circus, bringing London to a standstill.

Over 1,000 arrests were made, transport links and law enforcements were stretched, and it’s said to have many implications for months to come.

So what did our Tribes think of these protests?

Most of our Tribes responded positively to these protests, saying they supported the cause and agreed a larger discussion on climate change and how to tackle it needs to happen.

There was a little hesitancy from some members about whether Extinction Rebellion’s tactics were indeed correct, especially given the disruption it caused. Some Tribes said they felt the demonstrations could have been carried out more peacefully.

However, these members worried about the protestors’ tactics were in the minority. Most of our Tribes felt protesting in such a way was the “only way for them to be heard” and commented on the fact that the protests were non-violent, so they supported the lengths they went to in order to get their message across.

Yes – there isn’t enough focus on climate change in the government. drastic action like causing major disruption to transport links in the middle of London is the only way to get their attention.” – F, 22

“I feel the execution of the protests where bad. I believe that climate change is bad and awareness need to be raised and the government do something but extinction rebellion just caused trouble for people in London and cost a lot in the police.” – M, 16

Would they participate in a protest themselves?

Most said they would participate in a protest if it was about something they were passionate about, and it was carried out in a peaceful fashion. They also mentioned that they live in a democracy, so it’s their right to “voice your opinion”.

Few did hesitate, supporting the idea behind a protest, but unsure whether they would like to subject themselves to such an event.

The remaining few were totally against protests because they felt they were “a waste of time”. Also, that they wouldn’t like to participate in something so extreme and disruptive. Instead they favoured more passive forms of demonstration like a petition.

“I feel like sometimes protest are needed in order to get the point across in situations where other avenues on raising awareness will not work. I would participate in a protest if it was something I felt very passionate about. “ –F, 22

“I don’t agree with protests as they are disruptive and there are other ways like petitions that can easily get more votes and signatures due to social media” – F, 16

BLOG: Who is Really Responsible for Climate Change?

Should we blame big manufacturers entirely for climate change as they alone produce a large percentage of global emissio... Read more about BLOG: Who is Really Responsible for Climate Change?

We tried a new format for our blog post in November, asking two members of our community with opposing views to write a ... Read more about BLOG: Reversing Climate Change: It’s Time to Look in the Mirror
Your Browser is Outdated!
To experience this and other websites the way they're meant to be experienced, we recommend you update your browser.
Learn More and Update Your Browser